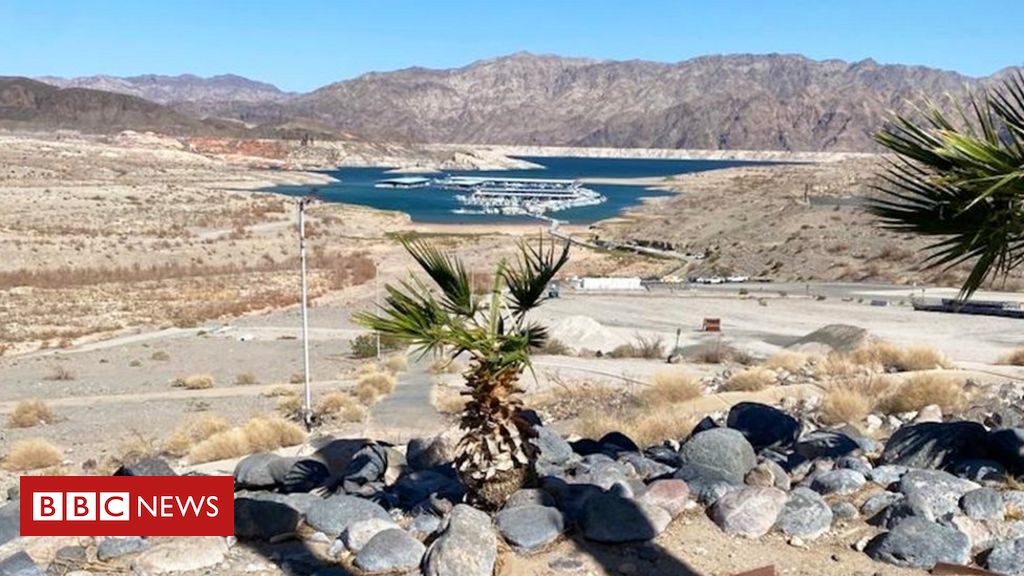 The catastrophic threat of total drought in Lake Mead, the largest water reservoir in the US

Drought is once again afflicting the western United States and putting millions of people’s access to water at risk.

The intensity of the drought in the North American West was evident in Lake Mead, formed by the Hoover Dam on the Colorado River. Located near Las Vegas, on the border between Arizona and Nevada, the lake is the largest water reservoir in the United States and supplies 25 million people in three states and Mexico.

But now the lake’s water level is so low that the bodies of murder victims from decades ago, previously submerged in its depths, are emerging. One was found inside a barrel with a shot—probably because someone thought it would be hidden forever at the bottom of the vast reservoir.

As dead bodies fuel discussions about the Las Vegas gang’s past, water experts warn of even more worrying consequences. If the lake continues to recede, it could reach such a low level that it will stop the Hoover Dam from producing electricity or supplying water to cities.

California residents have been instructed to conserve water at home to avoid the risk of forced restrictions on supply, as the severe drought on the US west coast is predicted to get even worse in the northern hemisphere summer months.

The guidelines are for people to wash the external areas of the houses less and take shorter showers. In Los Angeles, many people have already been asked to reduce their water consumption by 35%, as California has experienced the driest start to the year on record.

NASA, the US space agency, which tracks changes in water levels, warns that the western United States is entering one of the worst droughts on record.

“With climate change, it looks like the dominoes are starting to fall,” says NASA hydrologist JT Reager. “We have higher temperatures, less precipitation and less snow. Reservoirs are starting to dry up, and in places like the west [dos Estados Unidos]we have forest fires.”

These factors are starting to have “increasingly strong impacts”, Reager told the BBC. “It’s like watching this catastrophe, which was coming in slow motion, now sort of accelerating.”

Farmers are also beginning to feel the consequences of the drought. After all, about 75% of Lake Mead’s water goes to agriculture.

More than one-third of vegetables and two-thirds of fruits and nuts in the United States are grown in California. But thousands of hectares are uncultivated because farmers cannot get enough water to irrigate their plants.

The impact could be seen on supermarket shelves next year, according to California farmer Bill Diedrich. He explains that this season’s produce appears in stores next year, while showing his idle, completely dry fields. Normally, Diedrich would have planted tomatoes to be canned in the industry, but there wasn’t enough water this year.

He says he hopes his children can continue farming in California in the future. But now, “I don’t know what the possibilities are of that happening.”

For many people living in California’s agricultural heartland, wells have already started to dry up and they don’t have the money to dig deeper wells. Welfare organizations provide bottled water and large tanks of non-potable water for washing.

In San Joaquim Valley, California, local resident Fabian (who declined to give his last name) says he and his family of five rely on outside water tanks for washing and flushing the toilet. Fabian regrets having moved with his family to a rural area with so much insecurity in the water supply.

“It’s quite scary because we don’t know at the moment how the situation will be in a month or two. Maybe we don’t have any more water,” he says.

Many farmers argue that it is time for a monumental new infrastructure project like the Hoover Dam, built in the 1930s. Such a project would allow more rainwater to be stored rather than ending up in the ocean.

Dams are controversial and are typically opposed by environmentalists. But with a severe drought like the current one, even California’s Democratic leadership — strongly aligned with environmental groups — has already proposed resuming some of the state’s shelved dam projects.

Removing water from the air

While some are restless, others innovate. Arizona-based company Source is installing hydropanels in homes in California and other parts of the world that use the power of the sun to extract water from the air.

Kat George, manager of Source, was in California’s Central Valley when the company installed hydropanels in 1,000 homes, allowing people to have clean water. Even with their wells still functioning, water in many regions is contaminated with chemicals used in agriculture and cannot be safely drunk.

The company uses solar energy to power fans inside the panels, collecting and filtering moisture from the air so it can be safely drunk. The panels don’t produce enough water for washing, but a small system can supply a family with drinking water — as long as there’s sunshine, which is common in California.

They claim the technology can provide clean water anywhere, to anyone who needs it, but not enough for washing or irrigation in agriculture.

‘The lake half full’

At Lake Mead, it is no longer possible to launch boats at Callville Bay marina and the “lakeside” restaurant is now a long walk from the water.

But the dead bodies didn’t hurt business so much. New beaches have emerged and divers are visiting the lake in search of more bodies, according to Chad Taylor, the marina’s sales and marketing officer.

Previous Digital banks may end up with no annual fee cards
Next Thor: Love and Thunder | Film length scares fans