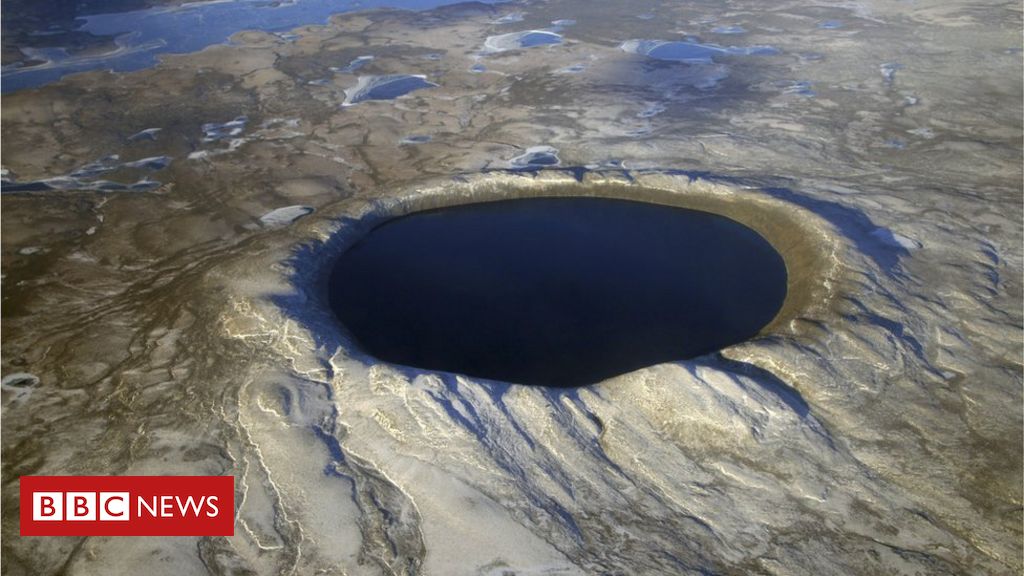 The mysterious giant crater in the Arctic that intrigues scientists

The plane banked a lot to the right. As we made our first flyby of the runway—or rather, the small patch of rough land in the arctic tundra that would serve as a runway—an alarm sounded, the red lights above the emergency exits began to flash, and the sound of the aircraft’s engines roared back to life. action took over the main cabin. My stomach turned.

It was an emotional performance to the far north of Quebec, Canada, a region known as Nunavik.

Encompassing the upper third of the Canadian province (larger than the US state of California and twice the size of Great Britain), of which the Ungava Peninsula is a part, this region is unknown to most people. But it was not always so.

In 1950, this area was featured in newspapers around the world and considered the eighth wonder of the world.

Not because of its wild nature, nor because of any man-made structure, but thanks to the distinctive feature of the terrain I was now flying over towards another runway landing attempt: Pingualuit Crater.

“The name is Inuktitut for the blemishes or pimples on the skin caused by very cold weather,” explains Isabelle Dubois, project coordinator at Nunavik Tourism, who had previously only visited the crater in winter, when the landscape was covered in snow.

I looked out the plane’s window to distract myself during our second landing attempt and thought about what an apt nickname was.

The tundra here is marked by crevices, fissures and depressions filled with small pockets of water.

However, amidst the numerous indentations, the crater of the same name stands out significantly.

With a diameter of about 3.5 km and a circumference of well over 10 km, it was not only its size that distinguished it, but also its symmetry.

Almost perfectly circular and filled with water, the crater looked like a compact mirror on the ground, in which our tiny Twin Otter aircraft was now reflected, looking like nothing more than a tiny speck of dust.

After a few bumps, more warning alarms, and a sudden, dramatic stop, we finally land, just a few kilometers from the rim of this crater.

We stayed at Manarsulik Camp, a cluster of five solar-powered cabins, which is the official base camp for anyone venturing into Pingualuit National Park, one of the most remote national parks in the country.

As we unloaded the plane (there are no porters or staff here) and settled into the warm huts, I chatted with Pierre Philie, a French cultural geographer with a strong interest in anthropology, a resident of Kangiqsujuaq (the northernmost settlement of Nunavik, and gateway to for this geographical wonder).

He was unwillingly sent to this part of Quebec 40 years ago, but he not only fell in love with her but a local woman, and never left.

Philie showed me a copy of a black and white aerial photograph of Pingualuit. It was taken on June 20, 1943 by one of the US Army Air Force officers who spotted it.

As I wondered what the officer must have done with it back then, Philie started to explain a little more about the crater to me.

“It was first discovered by someone from the Western world that year, during WWII, when fighter pilots spotted it and used it as a navigational aid. But they didn’t share it with the rest of the world until the war was over.” stated.

When they did, in 1950, one of the first people to be fascinated by it was an Ontario prospector named Fred W Chubb. He was convinced that the crater was caused by a volcano, which would likely mean there were diamonds inside.

He sought the advice of then-director of the Ontario Museum, Dr Meen, who, equally delighted by the idea, traveled there with Chubb to investigate (hence, for a short time Pingualuit was known as Chubb Crater) — but the theory of the volcano was eventually discarded.

“We now know beyond a shadow of a doubt that it is a meteor crater,” Philie said, as the sun began to set over Lake Manarsulik, located about 2.5 km from Pingualuit, leaving the crater’s rim so faint like a watermark on the dazzling pink horizon.

The next day began at sunrise with a walk between large rocky fragments.

Some, Philie explained, were large chunks of granite and fractured bedrock (relics of glaciation during the last Ice Age); others were examples of impactites, formed as a result of melting during impact.

The latter were black and covered with tiny holes, evidence of when the minerals inside liquefied and bubbled with the heat and pressure of the collision.

“The impact happened 1.4 million years ago,” confirmed Philie, as we climbed its rim.

“Looking at the width and depth of the crater [cerca de 400m]its impact is estimated to be 8,500 times stronger than the atomic bomb dropped on Hiroshima.”

But finally reaching the edge of Pingualuit and looking down into that gaping hole, where the lake glistened with the ice that encrusted two-thirds of it—despite it being July—was even more surprising.

“Of course, the Inuit knew about (the crater) before Westerners arrived to look for diamonds,” notes Markusie Qisiiq, director and guide at Pingualuit Park.

“They called it the Crystal Eye of Nunavik.”

From where I stood, under an incredibly blue sky dotted with as many clouds as there were “spots” on the tundra, this name seemed the most appropriate of all.

As we walked through the rough terrain, circling the lake, Philie became more and more excited.

He talked about the clarity of the water inside — powered only by rain and considered the second purest water in the world (only Lake Mashu in Japan is more transparent); about the mystery of the fish that live inside it — that scientists have yet to reach a consensus on how they got there, as there are no flows of water in or out, and that they have turned to cannibalism to ensure their own survival; and about evidence showing that, like the Inuit, other people also walked here at least 1,000 years before them.

“Landscape is a living book”, he concluded. “There’s a lot we can learn if we take the time to read it.”

In recent years, people have been coming here to do just that.

In 2007, a team of researchers from Laval University in Quebec, led by Professor Reinhard Pienitz, made a winter visit to collect underwater samples.

Pienitz described the crater, at the time, as a “scientific time capsule” and one that, while we continue to learn about it, could reveal clues about past episodes of climate change and how ecosystems adapted under pressure.

I walked to the water’s edge, where Philie picked up a rock and dropped it onto the frozen surface.

The silent air was immediately filled with a melodious sound as shards of ice ricocheted against each other and fell into the water.

After filling our bottles to taste this pure water, we headed back to the camp. We only stopped once, to let an imposing herd of reindeer pass—there were so many we couldn’t even count.

As I watched this spectacle of wildlife migrate alongside a crater as large as one found on the Moon, my stomach churned once again.

But this time it wasn’t because of a bumpy landing.

But, rather, by the realization that while there are no diamonds here, there is a wealth of stories and scientific revelations waiting to be discovered, mere feet below the surface.