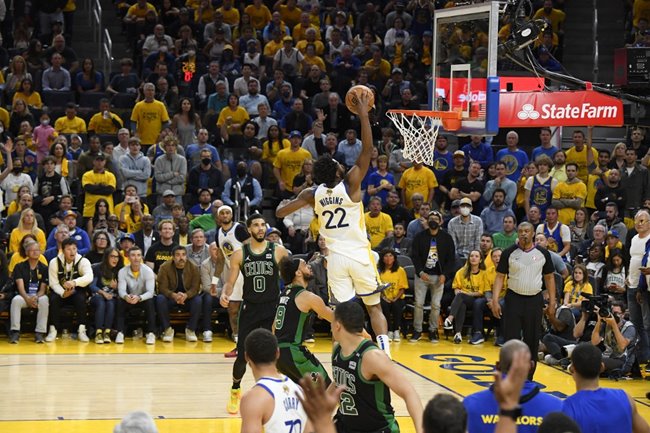 With a great performance by Andrew Wiggins, the Golden State Warriors beat the Boston Celtics and were one victory away from the NBA season title. In the match played this Monday (13), at the Chase Center, the home team won by 104 to 94.

In this way, the San Francisco team opened 3-2 in the NBA Finals, that is, it needs only one triumph to reach the seventh league achievement. Celtics and Warriors return to the court this Thursday (16), this time in Boston, for the sixth game of the NBA Finals. The ball will go up at 22:00 (Brasilia time).

The first quarter was largely dominated by the home team, who reached a 16-point lead (24-8). However, the Celtics fought back in the final two minutes with a six-point streak from Jayson Tatum. Thus, the Warriors made it 27 to 16 in the opening period of the match. Well marked, Stephen Curry scored just four points in the first 12 minutes of play.

On the other hand, the Boston team reacted at the beginning of the second period. Just as Curry was resting on the bench. However, Wiggins took responsibility and became the most effective guy in the Warriors offense. Thus, he ended the first half of the game with 16 points.

Also, both teams simply dented the perimeter hoop. After all, the Celtics and Warriors combined to 6-32 on three-pointers, that is, a meager 19%. Once again, what made the difference was the number of ball wasted. The Boston team committed nine turnovers in the first half, while the Californians only three. In addition, the Warriors scored 13 points after turnovers against just two from the Celtics.

The Celtics started the third quarter in an overwhelming and aggressive fashion on both sides of the court. After a 13-2 streak, including three balls from the perimeter converted by Tatum, the visitors were just one point behind on the scoreboard. While the Warriors continued to miss long-range shots (0-4), the Boston team came back calibrated (six threes converted in six attempts).

With three straight baskets from the perimeter, two from Marcus Smart and one from Al Horford, the Celtics took the lead for the first time in the game. All this in the first half of the period.

Subsequently, Klay Thompson came on the scene. Shirt 11 scored ten points, including two baskets from the perimeter. Thus, the Warriors prevented the visitors from opening a considerable lead.

However, Thompson committed the fourth foul and was benched. The substitute, Jordan Poole, hit two three-pointers in a row, including one at the time-out, and the home team returned to the lead: 75-74.

At the beginning of the final period, the Warriors made a 10-0 streak and opened an 11-point lead. That’s with Curry, barely on the shots (0-6 from the perimeter), out of court.

The Celtics’ first basket came after four minutes of play. Shortly thereafter, Draymond Green committed the fifth foul and went to the bench. However, the waste of the ball continued to “hurt” the Boston team. There were 18 in the match (against only six of the Warriors).

On the other hand, Wiggins stood out again, on both sides of the court, and the Warriors didn’t give the Celtics a chance to react. Defensively, the home team was fantastic in the final quarter, especially Gary Payton II, who came off the bench very well. After all, the Celtics made only four of 15 shots attempted in the fourth quarter.

In addition, the home team scored 50 points in the lane (against 36 for the Celtics). The Californian team also counted on the good offensive production of the reserves (31 points), while the Celtics scored only ten.

With three minutes remaining, Green was eliminated on fouls (for the third time in the series). Curry, on the other hand, left the court without converting a single 3, something that had not happened since November 2018. Thus, he ended a streak of 233 games with at least one basket from the perimeter.

Finally, Wiggins was the highlight in the triumph over the Celtics that put the Warriors close to the title: 26 points and 13 rebounds. The Boston team lost two straight games for the first time in playoffs this year.

Previous LoL: documentary about the creation of Arcane will be released
Next Xiaomi 12 Lite and Poco F4 have leaked color and memory options