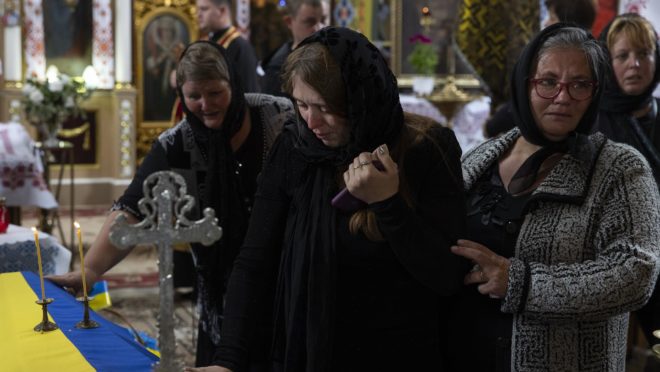 Battle in Severodonetsk opens up imbalance between Russian and Ukrainian forces

Ukrainian forces said on Monday that they had been expelled from the center of Severodonetsk, a key city in eastern Ukraine, in Luhansk, in the disputed Donbas. With ammunition in short supply on the Ukrainian side of the fighting, the next few weeks could be decisive for the course of the war.

Ukrainian units in Severodonetsk were surrounded. As the leader of the pro-Russian separatists, Edouard Bassourine, published, “Ukrainians have two options: surrender or die”.

“The enemy struck Severodonetsk, achieved partial success and drove our forces out of the city centre. Hostilities continue,” posted the General Staff of the Armed Forces of Ukraine on Facebook. “The Russians continue to destroy the city,” confirmed the governor of Luhansk, Serguiï Gaïdaï.

As announced by the commander of the Ukrainian army, Valeri Zaloujny, the Russians have a “ten against one” advantage in the region.

The leader of the breakaway Luhansk region, Leoni Passetchnik, commented on social media last weekend about the risks of accidents in Severodonetsk industries. “Our main objective is to clean up (Ukrainian fighters) without causing environmental disasters,” he said.

In late May, the Russian attack hit a nitric acid reservoir at the city’s chemical plant. At the time, the government of Luhansk warned the population not to leave the shelters and wear masks, due to the risk of intoxication.

Ukrainian authorities are seeking to negotiate a humanitarian corridor to evacuate civilians. At the Azot plant, around 500 people are still refugees, including 40 children. In the nearby city of Lyssychansk, an exit route for Ukrainians, three civilians have died in the last 24 hours, including a six-year-old boy, according to the Luhansk government.

If it conquers the city, Russia advances more easily through the neighboring region of Donetsk, indispensable for the conquest of the Donbas Basin.

Before the Russian invasion of Ukraine on February 24 this year, Severodonetsk had around 100,000 inhabitants. Today, it is largely destroyed and deserted. For two weeks, the city has been heavily bombed by Russian forces and pro-Russian separatists.

Along with Lyssychank, Severodonetsk has become the administrative center of the Ukrainian Donbas since Moscow-backed separatists settled in the eastern part of the region in 2014.

Severodonetsk was the largest stretch of Luhansk still under Ukrainian rule. Since Russian troops left areas closer to the capital, Kyiv, and headed for the Donbas, the city has been Russia’s main target, “with bombings from all sides, 24 hours a day”, as announced by the government of Luhansk last week.

According to researcher at the French Institute of International Relations Jean-Chritophe Noël, in an interview with the French newspaper Le Monde, Ukraine currently has a fixation point in Severodonetsk “to buy time, waiting for support so that the forces between the countries are in balance” .

Ukrainian authorities acknowledged on Monday a shortage of ammunition and weapons. Earlier this month, the country’s president, Volodymyr Zelensky, revealed that between 60 and 100 fighters enter Ukraine’s defense every day, while 500 are wounded daily.

Ukrainian government adviser Mykhaïlo Podoliak announced that the “carnage” takes place due to “the asymmetry between Ukrainian and Russian military capabilities”. Another adviser to the country, Oleksy Arestovych, said that without foreign aid, the country would already be defeated. “The West saves us financially,” he said.

However, Ukraine’s intelligence chief Vadim Skibitsky told Currenttime.tv on Friday that “international aid is not enough to slow down the offensive pace of Russian forces.”

Previous Nubank hits the hammer and prepares to enter the world of cryptocurrencies
Next Away from Maracanã for 42 years, Vasco’s grandmother thanks you for affection after going viral: “I felt like a child” | vasco