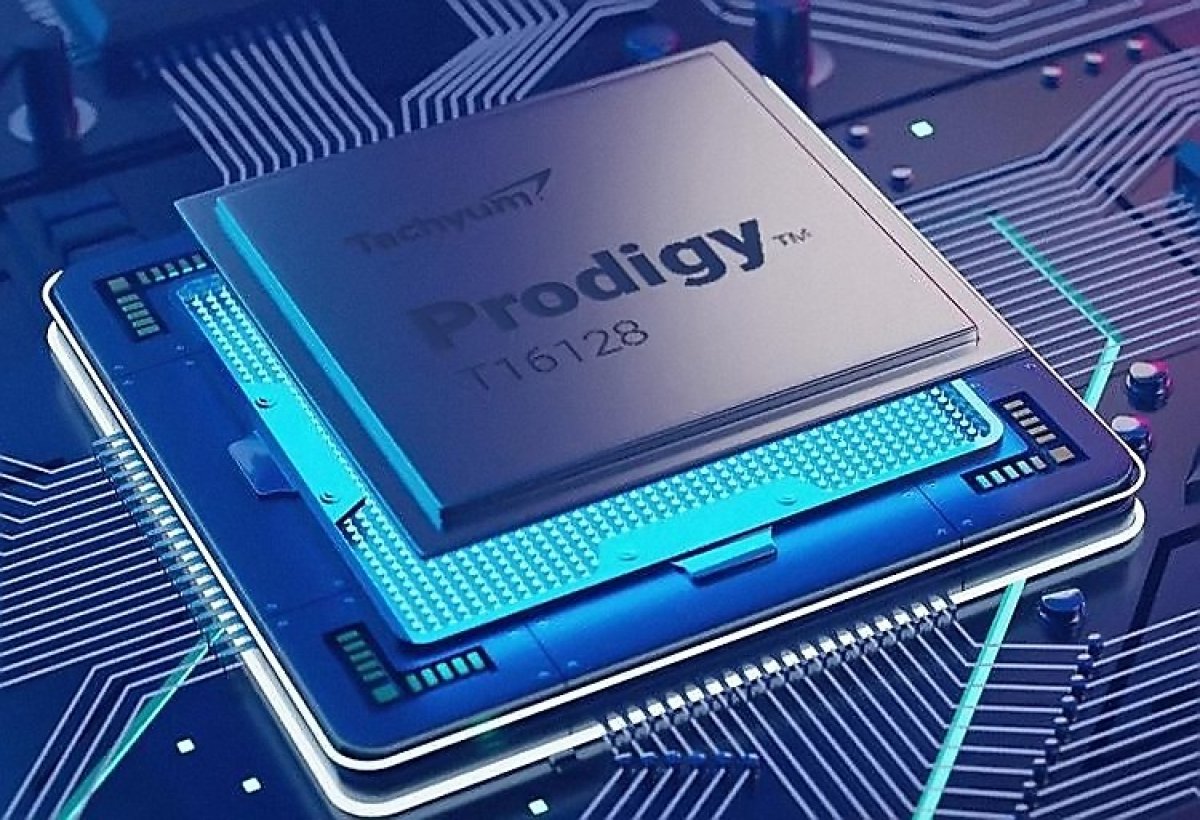 If processors with 64 cores are impressive, imagine one that brings up to 128 of these units. This is the main feature of Tachyum Prodigy, chip that also has other giant numbers. But you don’t have to look down on your computer. The novelty is aimed at applications that demand high performance and “universal execution”.

Understand as universal execution the chip’s ability to execute x86, Arm, or RISC-V code through software emulation, but without resulting in a drop in performance. At least that’s what Tachyum claims.

As has already become clear, performance is another notable feature of Tachyum Prodigy processors. The line has versions with 32, 64 and 128 cores. The last one, called Tachyum Prodigy T16128, is the one that draws the most attention, for obvious reasons.

In addition to an impressive number of cores, the T16128 supports 16 channels of DDR5 memory on a 1024-bit interface. The processor can work with up to 8 TB of RAM. Support for the PCI Express 5.0 standard, with 64 lanes, is another attribute of the chip.

But let’s look again at the cores. All are 64-bit and are based on the VLIW (Very Long Instruction Word) architecture. This is focused on executing large sets of instructions at the same time through parallelism. The frequency can reach 5.7 GHz.

Each core also has 64 KB of L1 cache and 1 MB of L2 cache. An interesting detail is that a core can use the L2 cache that is not in use by other cores as a kind of L3 cache.

Performance, but a lot of performance

These and other numbers can be summed up in a single word: performance. According to Tachyum, the Prodigy T16128 achieves up to 90 teraflops at FP64 in high performance computing (HPC).

This is a number close to what is achieved by professional GPUs. The AMD Instinct MI250X, for example, is a graphics accelerator with 220 compute units and 128 GB of memory that reaches 96 teraflops FP64.

But, as well observed by the Tom’s Hardware, GPUs cannot be used in every type of application. A CPU, on the other hand, is much more comprehensive in this sense. This is where the Tachyum Prodigy line excels.

Of course, native code — written specifically to run on machines with Prodigy chips — tends to run remarkably well. Linux, FreeBSD, Apache, MongoDB and Python are already among the operating systems and tools that are fully compatible with Prodigy machines.

But, as already highlighted, the line is also capable of handling software in x86, Arm and RISC-V, without performance degradation. In fact, Tachyum suggests that there may even be some loss of performance, but not in a significant way.

But all this power comes at a price (and I’m not talking about the costs of the chips, which were not revealed): it is estimated that the Prodigy T16128 can reach a consumption of 950 W when working at full speed.

The line can also be used in computers with four sockets. In this configuration, the total number of cores reaches 512; the combined consumption level, at 3,800 W.

It is worth noting that this consumption pattern applies to the Prodigy T16128-AIX. Other processor variants have simpler specifications and therefore require less power. This is the case of the Prodigy T16128-HT model, whose TDP is 300 W.

Tachyum: what company is this?

All this is very interesting, but one question remains: Tachyum, what company is this?

Tachyum is a semiconductor company founded in 2016 by Radoslav Danilak. Its purpose is to provide chips for HPC applications, artificial intelligence, datacenters and the like.

The company’s main product is the Prodigy line, which was presented based on the idea of ​​a “universal processor” — the aforementioned ability of the chip to handle software of different architectures.

The company is so committed to the success of its technology that it is building a supercomputer that promises to be the world’s fastest in artificial intelligence operations.

From humble to Tachyum there is nothing. The company’s intention is to fight with Intel and AMD in high-performance applications. The Prodigy T16128 suggests that the company is taking this goal seriously.

But the moment calls for feet to remain on the ground. So far, Tachyum has only one FPGA (programmable chip) prototype of a Prodigy processor and all performance figures are from simulations.

In any case, the company is already accepting orders for chips. The first “real” unit is expected to be presented in August. Mass production is expected to begin in the first half of 2023. All processors in the line will be based on TSMC’s 5 nanometer (N5P) manufacturing process.

Previous Liverpool announce Darwin Núñez, who poses with the English club’s shirt | international football
Next ‘How to Kill Your Husband’ author gets life in prison for murdering partner