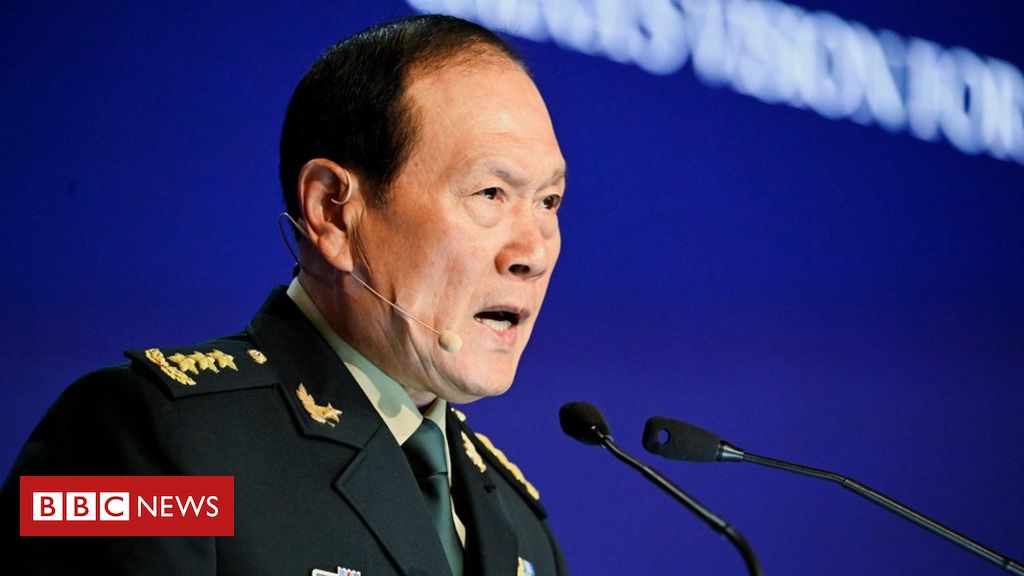 Taiwan: Can US and China go to war over the island?

Weeks after US President Joe Biden warned China about Taiwan, the Chinese government made its most incisive statement yet on the topic, saying it would “resolutely crush any attempt” at independence for the island.

On Sunday, China’s Defense Minister General Wei Fenghe accused the US of supporting Taiwan independence, saying the Americans were “violating their promise in Taiwan” and “interfering” in China’s affairs.

“I will make this clear: if anyone dares to separate Taiwan from China, we will not hesitate to fight. We will fight at all costs and we will fight to the end. This is the only option for China,” the minister said during the Shangri-la Dialogue. , an Asian security summit held in Singapore.

Biden had said China was “flirting with danger” by flying its warplanes near Taiwan. The American has promised to protect the island militarily if it is attacked.

Taiwan, which considers itself a sovereign nation, is historically claimed by China. China, on the other hand, considers it a “rebel” province. But Taiwan has its biggest ally in the US. An American law requires the US to help the island defend itself.

The escalation in the two countries’ rhetoric comes as China increasingly sends warplanes into Taiwan’s air defense zone, while the US deploys warships into the island’s waters.

Are the US and China close to a military conflict?

One great fear is that a war will start with China invading Taiwan. The Beijing government has said in the past that it can forcibly regain control of the island if necessary.

But most analysts say that’s not likely — at least not yet.

There is a debate among experts over whether China has the military capacity to take Taiwan. The island has considerably increased its air and sea defenses.

But many agree that even Beijing recognizes that such a move would be costly and disastrous, not just for China but for the rest of the world.

“There’s a lot of rhetoric, but the Chinese have to be very careful if they want to invade Taiwan, especially at this time so close to the Ukraine crisis. The Chinese economy is much more interconnected with the global economy than Russia’s,” says William Choong of Institute for Southeast Asian Studies, a research institute linked to the Singapore government.

China has consistently said it seeks “peaceful reunification” with Taiwan – an argument General Wei repeated on Sunday – and would only act if it faced provocation.

An example of what China might consider provocation would be Taiwan formally declaring its independence. But this is something President Tsai Ing-wen avoids quite emphatically. In her view, Taiwan is already a sovereign state.

Most Taiwanese support this position – known as “maintaining the status quo” – although there are those who want to move towards independence.

Likewise, the US would be reluctant to engage in costly military conflict in Asia and has repeatedly signaled that it does not want war.

US Defense Secretary Lloyd Austin, who also participated in the Dialogue, said in his speech that the US does not support Taiwan independence, nor does it want “a new Cold War”.

“Both sides keep their guns in Taiwan. They (US and China) need to look strong and don’t want to be seen as backing down,” says Collin Koh, a researcher at the S Rajaratnam School of International Studies in Singapore.

“But at the same time, they’re very careful about getting into direct conflict. They’re looking at each other’s rhetoric with eyes wide open, and both sides are trying to measure the risk.”

A meeting between Gen Wei and Austin at the Shangri-la Dialogue was seen as a positive sign, showing that both sides want to show that they “are still willing to sit down and talk, reach consensus, and agree to disagree,” notes Koh. .

This, the researcher said, would reduce the possibility of miscalculations that would result in a conflict and a “general reinvigoration of dialogue” – something that was missing in the Donald Trump administration (2017-2021).

Despite this, analysts believe that China and the US will continue with tense rhetoric for the foreseeable future.

China may even intensify its “grey zone war” designed to wear down Taiwan’s military forces and patience by sending more warplanes and creating disinformation campaigns, says Ian Chong, a China expert at the National University of Singapore.

In the past, Taiwan has accused China of creating disinformation campaigns ahead of the island’s elections. Taiwan will hold important elections later in the year.

For the US and China at least, “there is no political will to change positions” for now, particularly with significant events on the horizon — the US midterm elections in November and the 20th Congress of the Communist Party of China on Monday. half of the year, when Chinese President Xi Jinping is expected to further consolidate his power.

“The good news is that neither party is willing to escalate tensions,” says Chong.

“But not escalating doesn’t mean we get to a better plateau. So we’re all stuck in that position for a while.”