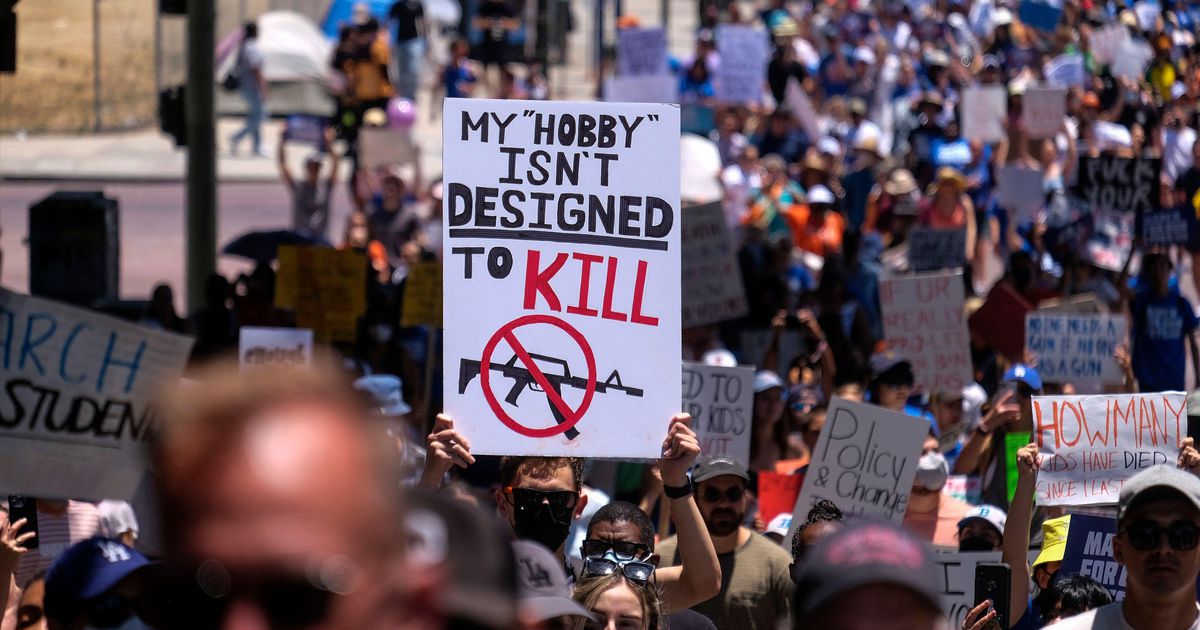 US Firearms Deal Is Less Than Democrats Wanted, More Than They Expected

WASHINGTON (THE NEW YORK TIMES) — The bipartisan agreement for greater control over US firearms announced this Sunday, the 13th, was far from what Democrats would have preferred after the buffalo massacres and gives elementary school in Uvaldebut achieved considerably more than they had previously expected.

The proposal, which still has a long way to go before becoming law, puts the focus less on firearms “themselves” and more on other factors, such as purchasers’ mental health or violent tendencies, in a concession to Republican hesitation and the difficult reality of political resistance that makes tougher controls on sales impossible, not to mention bans on firearms.

While not raising the minimum age to purchase assault rifles from 18 to 21, the plan would improve background checks on those under 21 before they can acquire a firearm — which is perhaps the most significant element. of the new measure. Republicans say there is enough sentiment in favor of raising the age limit, but perhaps not enough to bypass an obstruction.

Democrats would have much preferred to ban assault rifles and high-capacity cartridges, impose universal background checks and take other stringent steps to limit access to firearms. But they will accept the deal as a step in the right direction.

“We cannot allow perfection to stand in the way of congressional action,” said Senator Dick Durbin, a Democrat from Illinois, his party’s deputy leader in the Senate, who said he preferred a ban on assault weapons for military use. “While this agreement does not address these and other aspects, it can and will make our country a safer place.”

In interviews over the past two weeks, several Democratic senators made it clear that they were ready to accept almost any term that bipartisan negotiations were capable of producing, rather than embroil themselves in yet another fruitless stalemate on the Senate floor and end up empty-handed.

That outcome could have allowed them to score a potent political point, scolding Republicans for standing in the way of popular firearms control initiatives, but it would not have responded to the public call with action. Blocked on several legislative fronts, Democrats are eager to claim some sort of victory for a change.

“Even if more is needed, this package will take steps towards saving lives,” the president of the Chamber of Deputies said in a statement issued on Sunday, Nancy PelosiDemocrat from California, indicating he will support the proposal despite the fact that lawmakers last week passed much broader measures.

As the discussions unfolded two weeks ago, it seemed more likely that the effort would thwart, like many before them, once the initial outrage over the more recent massacres wore off. And the appointment of Senator John Cornyn of Texas as the top Republican negotiator limited the possibilities from the start, as Cornyn was quick to declare that he would not support a ban on assault rifles or other steps that would make it harder to obtain firearms.

But as negotiations continued, Senator Chris Murphy, a Connecticut Democrat, his party’s top negotiator, said steady progress was being made, and that the talks felt different than failed efforts in the past. On Sunday, he said on Twitter that he thought Americans would be “surprised” by the scope of the new legislative order, which included more substantial measures than those initially put on the table.

The more extensive background checks on 18-21-year-old buyers is a narrower version of the Democrats’ years-long background check, and will allow more time to screen potential firearm buyers who have been flagged for a check. initial snapshot. And, for the first time, underage criminal records and mental health records will be admitted as part of the analysis.

The agreement includes federal incentives for states to enact so-called “warning laws” to temporarily seize firearms from persons classified as threats to themselves or others. In a long-desired change rejected by Republicans in the past, it will become harder for people accused of domestic violence to obtain firearms, and restrictions on romantic partners will be part of a ban that currently only applies to spouses.

Any of these provisions are likely to attract significant opposition from Republicans who believe they won’t budge on gun control measures, which they consider intolerable affronts to Second Amendment rights. But the Republicans involved in the negotiations believe they have made acceptable concessions without disturbing the gun rights that so many Republican voters consider sacrosanct.

Gun control in the US

While gun control proponents said on Sunday they hoped the proposal would usher in a new era of mutual concessions, it is considered likely the best opportunity to step up gun control in quite some time.

Given the public outcry over the massacres and criminality in general, both parties are ready to act and make concessions to each other. Enough Republicans have also positioned themselves to take the necessary political step, and negotiators in both parties have had support from their leadership to try to make something happen. But with Republicans poised to win a majority in the House and threatening to seize the Senate in November, Democrats’ prospects for the more expansive changes they crave are not looking good in the coming months.

Still, both sides felt it was worth agreeing, proving that Congress, under the horror of heinous gun violence, can at least this time offer more than condolences and prayers.

“When we put our partisan differences aside and focus on what’s best for the American people, the Senate is able to make a substantial and positive impact on our society,” said Senator Chris Coons, Democrat of Delaware. “This is a step forward for the Senate, and if the proposal becomes law, it will be a much bigger step forward towards preventing firearm violence and a step forward for our country.” / TRANSLATION BY AUGUSTO CALIL

Previous Warriors take down the Celtics and could be NBA champions next Thursday | nba
Next Robert Downey Jr. congratulated Johnny Depp on win over Amber Heard