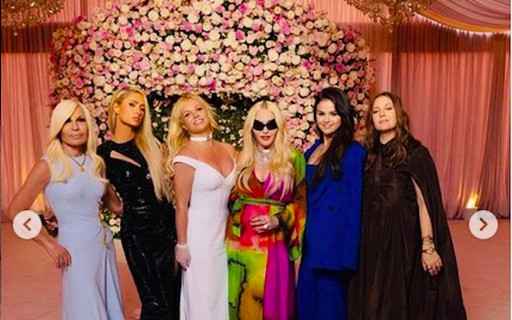 Singer Britney Spears made a revealing post about her marriage on social media. She talked about the presence of Madonna and Selena Gomez at the party, saying that the two fell more than once during the event. In the same publication, she also blasted her older brother, producer Bryan Spears, accusing him of abusive and toxic postures while she was under their father’s guardianship. The 40-year-old artist made the post on Instagram and soon after deleted it.

Britney stated, “I’m so happy with you guys!!! Happy, happy, happy!!!” Britney began in her post. “My friend watched the video of the party and to be precise… Madonna fell three times… Selena Gomez fell twice and I fell only once because of the rose petals. I’m surprised I didn’t fall every 5 minutes… And no, I didn’t drink a single drop of alcohol!!!”.

Afterwards, the singer exposed her criticism of her brother, citing her guardianship, administered by her father for almost 14 years. Britney’s relationship with her family is troubled. In November 2021, the singer obtained the end of the guardianship in the United States Justice.

During her guardianship, all of Britney’s financial, professional and personal decisions had to have her father’s approval. In the midst of the lawsuit filed by her demanding the end of the guardianship, the artist and her parents had more than one public clash, with Britney lamenting the regulations in her life.

“I can’t drink a lot… True story – in my 13 years under guardianship I was taking drug tests 3 times a week… I don’t even like alcohol. Meanwhile, I heard that my dad was in bars every night… And my brother ate his shrimp salad with whiskey and soda every night in Vegas after my Vegas shows and even before!!! He didn’t even give me a sip…”

Spears went on to tell her brother: “You let your 5-year-old put her hand in her mother’s wine and think it was bullshit when I left the stage for the third time a week with my feet in heels going to bed and you said ‘no’ …. I ask WHY???? Let’s talk about it… It’s the power my father had to make me literally feel like nothing.”

The singer later called her father and brother bullies and said, “I’m sorry but police officers behave EXACTLY the same… Just because they wear a star on their shirt every day they think they can bully.”

Previous Dall-E: See the most bizarre creations of the AI ​​imager
Next Flamengo advances and is close to signing Everton