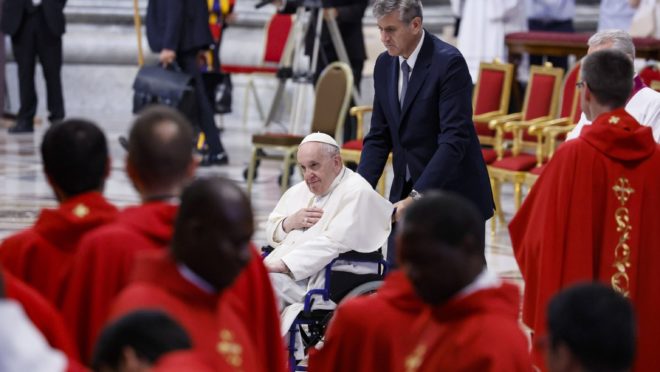 Is Pope Francis about to die (or resign)?

A little over a month ago, the rumors started. Pope Francis appeared in a wheelchair, which he never got rid of, using it for almost all of his public engagements (rarely does he appear using one of those multi-legged canes). On important occasions in the liturgical calendar, such as the recent feast of Pentecost, Francis delivered a homily but did not celebrate Mass.

And then the talk about the pope’s health intensified. Rome is full of snatches of popular wisdom about pontiffs, such as “in a conclave, whoever enters a pope leaves a cardinal”, or “after a fat pope comes a thin pope”, or even “the pope is always well, until he is dead”. They are more jokes than truths: many conclaves elect the favourites, a pope is not always succeeded by someone of opposite personality or convictions, and John Paul II is the best recent example that the Vatican has treated the health of popes with more transparency. So, let’s get to the facts.

Francis’ problem is more than mobility than something that actually puts your life at risk. The pope has a torn anterior cruciate ligament in one of his knees. I don’t know if the reader has already experienced this; I tore the ACL in my right knee in 2017 and was even afraid to go downstairs with my 1-year-old son on my lap, because it always felt like I was going to lack support and I would roll down the stairs with him. Philip Rivers — probably the most Catholic quarterback in NFL history — played in a conference final with a ruptured ACL in 2008, but he was a 26-year-old athlete; we’re talking about an octogenarian who, on top of that, suffers from sciatica. In 2021, the pope underwent surgery for a serious diverticular stenosis in his colon and had part of the organ removed, but as far as we know the problem is resolved.

The pope himself has already ruled out surgery to, for example, reconstruct the ligament. In late May, he told Italian bishops that general anesthesia for colon surgery had caused a series of very unpleasant side effects that he would not want to relive. So, unless other procedures, such as infiltrations, and daily rehab sessions do a good job, Francisco could end up in a wheelchair. And then another possibility arises, that of resignation – not least because Francis told the bishops that “I resign before they operate on me”.

To fuel these rumors, there is the consistory called for August, a month in which these events do not usually take place (August is the quintessential holiday month in all of Italy). And, more recently, there was the announcement that Francis will visit L’Aquila, the city where Saint Celestine V, a pope who resigned with just five months at the head of the Church, is buried. And then all Vatican commentators remembered when Benedict left his pallium over the urn where the pope’s body rests in 2009, four years before he resigned. But the associations only began to be made after Benedict XVI left the pontificate, and as far as I know the pope emeritus has never confirmed that his gesture in L’Aquila was a “sign” of things to come.

For the writers of the resignation, what will happen? Francis carries out the consistory, putting even more “Franciscans”, “Francisquists”, call it what they will, in the College of Cardinals; he goes the next day to L’Aquila to venerate the body of Saint Celestine V and follows in the footsteps of his predecessor, announcing that he is leaving; finally, in the conclave, the cardinals choose someone very much in line with Francis. But I personally find the script very unlikely, and I explain why.

I very much doubt that Francis will resign while Benedict XVI is alive. If “two popes” cause enough confusion, imagine three

The statement to the Italian bishops is the least: it was made in jest, as when he told the Mexican bishops that the medicine that would really make him better would be tequila. The consistory has a second objective, in addition to the appointment of new cardinals, which is to reflect on the reform of the Roman Curia, already in force; waiting until November for this discussion would be too much. In addition, Francis already has a confirmed trip to Kazakhstan in September; and his trip to L’Aquila is motivated by the celebration of the Celestine Pardon, instituted by that pope in 1294 and a precursor of the jubilee celebrated every 25 years by the Catholic Church: on the 28th and 29th of August, a plenary indulgence is granted to those who confess, take communion and cross the Holy Door of the Basilica of Santa Maria in Collemaggio. As John Allen Jr. said, it is a “festival of mercy”, a theme very dear to the pope.

And finally, there is an even more relevant reason: Benedict XVI. I very much doubt that Francis will resign while Joseph Ratzinger is alive. If “two popes” cause enough confusion, with conspiracy theories, crude films and Catholics “preferring” one pope over another, imagine three. Francisco knows this very well, and I don’t think he wants to make the situation worse. Especially since the role of the pope emeritus, let’s face it, was not very well defined after the departure of Benedict XVI. This discussion would need to be done calmly, preferably before there is another waiver.

The cap is not the problem

The most conservative catholicosphere has greatly echoed a speech by Francis to the bishops of Sicily, on June 9:

“Liturgy, how are you? (…) As [os padres] celebrate? I don’t go to mass there, but I saw the pictures. I speak clearly. Dear ones, still the lace, the caps… but where are we? Sixty years after the Council! A little update also in liturgical art, in liturgical ‘fashion’! Yes, occasionally using grandma’s lace is fine, but On occasion. It’s to please grandma, right? (…) It is beautiful to honor grandma, but it is better to celebrate the mother, Holy Mother Church, the way she wants to be celebrated.”

Well, if I’m wrong and Francisco resigns in August, that’s the kind of statement I won’t miss. “Sixty years after the Council” must be the Catholic version of “in the middle of the 21st century”. Like Francis, I also don’t go to Mass there in Sicily, so I don’t know if there is a more serious problem there, with attachment to more elaborate liturgical vestments for mere ostentation, to show off orthodoxy (real or pretended) or I don’t know. But if this is the case, the pope would need to explain further, not least because he knows that everything he says ends up at least published on the Vatican website, and that is why it is accessible to a universe of faithful who are not aware of the particular context. from Sicily. And the Second Vatican Council did not abolish or disallow any garment – ​​in fact, many people would be surprised to see what the Council Fathers defended in the Sacrosanctum Conciliumsuch as the use of Latin, at least in some parts of the Mass (SC 36 and 54), Gregorian chant (SC 116) and the organ (SC 120).

For, in the end, the problem is not the cap or the lace details of the albs and surplices, it is the attitude of those who use or stop using them. With this speech, the pope ends up putting in the same bag (even if he didn’t do it deliberately) the exhibitionist priests and the priests who simply want to wear a more elaborate robe for very legitimate reasons (including the idea that divine worship is should use whatever is most beautiful). And it gives ammunition for the latter to be attacked around the world by priests who despise obedience to everything the Church asks in terms of the liturgy, preferring even to disguise themselves as lay people – and I sincerely consider the latter a much more serious problem than a priest who wear a cap to show off.

Previous How the DALL-E image generator works, which became a fever on the networks
Next ‘It’s time for Ceará to beat Libertadores’, says Marquinhos Santos in presentation