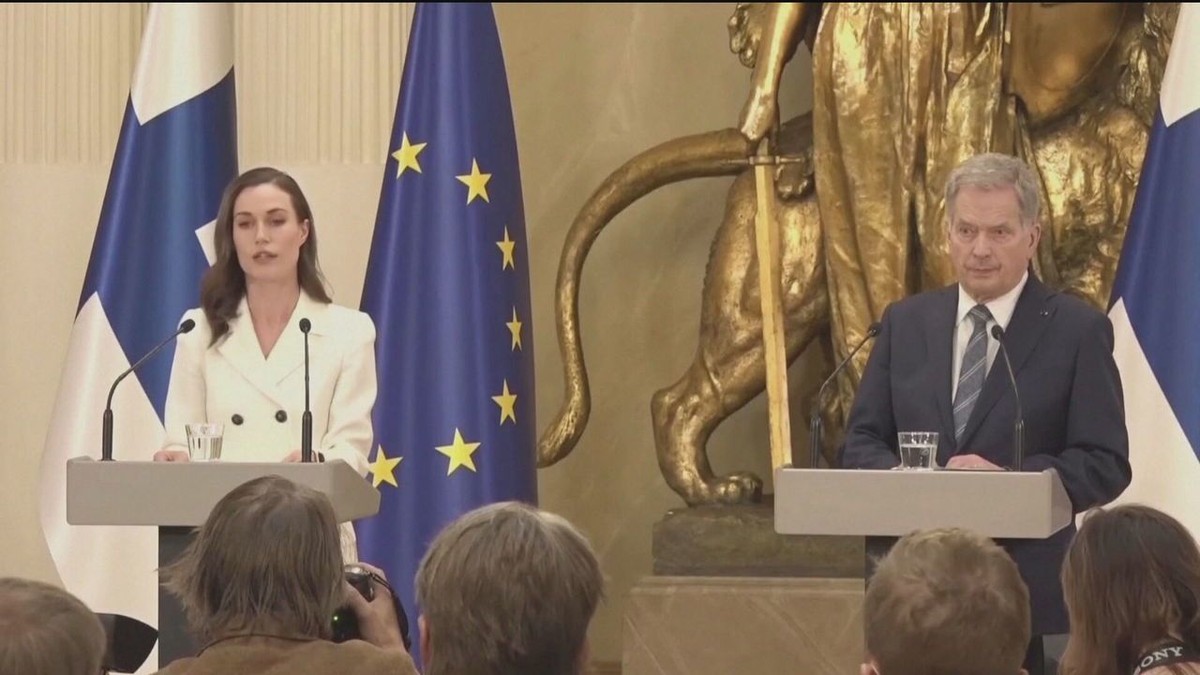 Some analysts believe the decision is a “disaster” for Moscow, which has always viewed the alliance’s expansion as a threat to its security.

But Russian President Vladimir Putin surprised many in May 2022 by claiming that there is “no problem” as long as new NATO members do not harbor military infrastructure on their territory, especially nuclear weapons.

What has become clear is that the strategic map of the region will be totally different when Finland and Sweden join NATO.

Photo of the missile system in Kaliningrad, Russia, on March 11. — Photo: Vitaly Never/Reuters

“The Baltic Sea will effectively be converted into a NATO lake,” said Andrey Kortunov, head of Russia’s Council on International Affairs, a Moscow-based think tank affiliated with the Russian Foreign Ministry, recently declared.

In fact, with Sweden and Finland joining NATO, Russia will retain around 200 km along the Baltic Sea coast. The alliance countries will occupy 90% of the other 8,000 km of coastline: Estonia, Latvia, Lithuania, Poland, Germany, Denmark and the new members, Sweden and Finland.

But sandwiched between Poland and Lithuania is Kaliningrad oblast – an enclave, or administrative region of Russia, with no land border with the country’s territory itself. With just under a million inhabitants, Kaliningrad has become a strategic point in the deepening divisions between the West and Russia.

There are analysts who guarantee that this small territory is essential, both for Moscow’s offensive against Ukraine, and to guarantee its defenses against possible hostilities from NATO countries. And there are even reports that Russia has already installed nuclear weapons there.

From Königsberg to Kaliningrad

Kaliningrad is currently one of Russia’s 46 oblasts, but it is the only one that does not have a land border with the country. In addition to its strategic and military importance, Kaliningrad has great historical importance, both for Europe and for Russia.

The historical origins of the territory go back a long time and are closely related to the fate of East Prussia and its capital, Königsberg. The ancient city was founded in 1255 by the Teutonic Knights – a German-born Catholic crusade that ruled Prussia.

When East Prussia separated from Germany after World War I, the territory remained part of Germany until early 1945. At the end of World War II, it was conquered by the Red Army of the Soviet Union.

The ‘Big Three’ monument was inaugurated this Thursday (5) in Yalta, Crimea, in honor of the meeting of leaders Josef Stalin, Frenklin Roosevelt and Winston Churchill.

The Yalta Conference defined the division of territory between Poland and the USSR, which was formalized in Potsdam in 1945. Its Russian name is derived from Mikhail Kalinin, who was a leading member of the Bolshevik communist movement and head of state of the Union. Soviet Union between 1922 and 1946.

Between Russia and the West

Kaliningrad is home to the only year-round ice-free port on the Baltic Sea. For this reason, the port city is essential, both for Russia and for the Baltic States, to guarantee transport and commerce throughout the region, where temperatures often stay below freezing during much of the winter.

But apart from transport and trade, Kaliningrad is a strategically vital region for Russia, due to its geographical position on the Baltic Sea and its proximity to NATO. It is home to Russia’s Baltic Fleet and is Moscow’s westernmost territory, close to the heart of Europe.

Swedish military plane and tanks on the island of Gotland, a tourist destination in the country where the government has announced an increase in the presence of the Army due to threats from Russia in the Baltic Sea (Photo: Associated Press)

In May 2022, the Baltic Fleet announced that it would carry out a series of simulated missile strikes from its nuclear-capable Iskander system. The Iskander missile system was first introduced to the region in 2016 and upgraded in 2018, as part of a Russian strategy to counterbalance NATO’s development of a ballistic missile defense shield in Europe.

Regular military exercises with the participation of the Baltic Fleet have been taking place in Kaliningrad since the invasion of Ukraine.

“Kaliningrad has been at the center of Russia’s security concerns since the first wave of NATO enlargement was announced in the 1990s,” said Ruth Deyermond, a professor of post-Soviet security in the Department of War Studies at King’s College London.

“It is not surprising that this region, which is probably the part of Europe with the highest concentration of Russian and NATO forces, is now the focus of increased security concerns on both sides,” says Deyermond.

Russia does not deny or acknowledge that it has installed nuclear weapons in Kaliningrad and often uses vague language about these accusations.

“The installation of this or that weapon, the deployment of military units etc. on Russian territory are exclusively matters of sovereignty of the Russian Federation,” Kremlin spokesman Dmitry Peskov said in 2018.

But some officials, such as Lithuanian President Gitanas Nausėda, say that Moscow has already installed nuclear weapons in that strategic Baltic region.

Military analysts believe that if NATO were to intervene in the ongoing conflict in Ukraine or if Moscow were to point its guns at other former Soviet republics such as Lithuania, Kaliningrad could be a launching pad for a Russian attack on those countries.

But Stefan Wolff, professor of international security at the University of Birmingham in the UK, does not believe this is currently a likely scenario.

“I don’t have the impression that Russia is seriously considering an escalation, nor that it has the resources to do so at the moment,” he told BBC News Mundo. “But it is a long-term possibility. So it would be important to strengthen NATO’s defensive capabilities now to deter any Russian move in the future.”

Signs on the border between Finland and Russia — Photo: Essi Lehto/REUTERS

Experts agree that when Sweden and Finland become members of the alliance, Russia is likely to strengthen its military position in Kaliningrad. But this, according to Ruth Deyermond, “is probably to be understood more as a defensive thing. Russia will be protecting its territory against NATO, not preparing to attack Poland or the Baltic states.”

It is not known how long the ratification process for the inclusion of Sweden and Finland in NATO will take. Normally, this type of process takes less than a year, but it has already been said that, in this case, some members of the alliance could press for speeding up this process, such as the United States.

Meanwhile, experts believe that the heavily militarized territory of Kaliningrad could become a pivotal point for Russia’s offensive against Ukraine.

“It is not yet fundamental, but its importance could increase if there is an escalation between Russia and NATO or if Russia starts destabilization operations in the Baltic States or Poland”, highlights Stefan Wolff.

“The region is small, the terrain does not offer significant natural barriers and there are a lot of military personnel, very close to each other. This provides favorable conditions for an accident to get out of control”, she explains.

“But as long as all parties are aware of this possibility, as I believe they are, the risk can be managed”, assures the expert from King’s College.