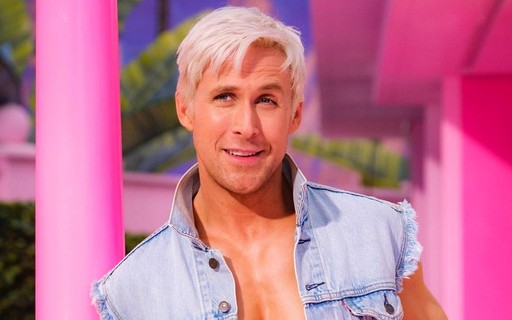 Waner released this Wednesday (15) the first image of Ryan Gosling as Ken in Barbie, the live-action movie about the famous doll starring Margot Robbie. With platinum hair and boasting a very ripped six-pack, to make the plastic belly of the original doll envious, in addition to an almost orange tan, the actor appears wearing a vest and jeans, with personalized underwear and in a pink backdrop. pink.

“July 21 in theaters,” the studio’s Instagram post warned. The film is directed by Greta Gerwig and screenplay written by her and Noah Baumbachand a star-studded cast like Simu Liu, Kate McKinnon, America Ferrera, Issa Rae, Michael Cera and Rhea Perlmanamong many others.

Will Ferrell will be the CEO of a toy company and although the plot has not yet been revealed, it is known that several characters from the Barbie universe will be in the film. Rumors say that the film will have a more feminist footprint, as is characteristic of Greta’s work, with Barbie, who was once considered a symbol of oppression for representing unrealistic standards of beauty, being expelled from the magical world of Barbieland precisely because she was not be perfect.

The cast has said little about the film. Simu had to shave his body with wax and said that the experience was the worst possible. “The waxing was educational to say the least. It was one of the most painful experiences of my life. I have a newfound admiration for the amazing, brave women who go through this every month,” the actor explained.

He also revealed that Ryan, who has been in excellent physical shape for years and has already shown his abs in several movies, went out of his way for Barbie. “He’s definitely, like, gym in the morning, gym after work. … As much as I believe I have a work ethic, I also love food a lot. Just hearing a little about his strict diet and how much emphasis he puts on caring of yourself and your body, I respect it a lot, I really respect it”, said the Marvel actor in a recent interview.

Previous Drought in Iraq causes 3,400-year-old city to reappear amid the Tigris River
Next Flamengo vs Cuiabá; predictions of a game where both teams try to escape the relegation zone