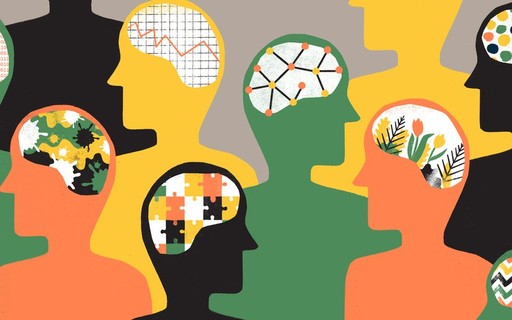 Neurodiversity: what it is and how social networks have helped in diagnoses – Época Negócios

Many people do not know or did not know until recently the word neurodiversity. But the term, used to describe the enormous and diverse differences that exist in the human brain, has become increasingly popular.

Part of this is thanks to social networks like TikTok, Twitter and Clubhouse, which have provided space for people to talk about their neurological differences.

And not only that: for many, social networks have been for many the missing proof to realize that they are neurodivergent.

This was particularly so during the pandemic, when people with so-called “diverse brains” were able to find communities and people on the internet that they could relate to.

The concept of neurodiversity points out that the mind can work in different ways, and that these differences are just natural variations of the human brain. That is, conditions like hearing voices or autism are differences on a spectrum, not specific problems to be solved.

Lawrence Fang, director of the Stanford University neurodiversity project (USA), defines this concept this way: “It’s just a way of describing that our brains are different and, like any human being, it won’t be good at everything.”

People considered neurodivergent may have cognitive variations such as attention deficit hyperactivity disorder (ADHD), autism (a spectrum of disorders that usually manifest themselves in difficulties in socializing, repetitive behavior and, in some cases, anxiety and ADHD), dyslexia (disorder that makes reading and writing difficult) or dyspraxia (neurological disorder of motor coordination that involves difficulty in thinking and planned movement, according to an association of specialists on the subject).

There are three main types of ADHD, and their effects can vary from person to person: inattentive, hyperactive/impulsive, and a mix of both. In general, this disorder is diagnosed in childhood, but more and more adults find themselves experiencing this type of neurodivergence.

Blogger and businesswoman Rach Idowu explains her ADHD: “The inattentive type of ADHD can mean that you exhibit symptoms or characteristics such as being easily distracted and inattentive to details, procrastination, disorganization, and poor memory. (…) The hyperactive-impulsive type. ADHD shows traits of impulsiveness and an ability to interrupt people. I have a mixed type of both. And I’m also very creative and good at problem solving.”

Experiences among neurodivergent people can vary.

Some may be sensitive to environments that cause sensory overload. Others may process information differently, while some may not be able to read facial expressions or may have difficulty identifying numbers and words.

Neurodiversity movement
According to the Neurodiversity at Work program at Stanford University, between 15% and 20% of the world’s population is considered neurodiverse. The rest would be classified as neurotypical.

During the 1990s, there was a movement that raised awareness of neurodiversity and embraced the inclusion of all people with possible neurodivergence.

The term neurodiversity was coined by Australian sociologist Judy Singer in her 1998 thesis to promote equality and inclusion for “neurological minorities”.

Today, neurodiversity is seen as a social justice movement and has become even more popular. Research and education are increasingly important in the way certain neurological disabilities and conditions are viewed.

complicated diagnosis
This growing movement has helped raise awareness of neurodiversity, but many people still struggle to be diagnosed and supported.

Rosie Thomas is 33 years old and lives in Berlin. She was diagnosed with ADHD in 2020 during the covid-19 pandemic. She later decided to become a tutor, and today she works to support others like her.

“For three decades I literally thought I was like a total Martian. I didn’t think anyone else was like me,” Thomas told the BBC. “I was seen by a psychiatrist, who said that all these things I was struggling with were symptoms of depression. I knew I wasn’t depressed and now I know they were examples of executive dysfunction.”

Executive dysfunction refers to the range of cognitive, emotional, and behavioral difficulties that commonly occur after injury to the frontal lobes of the brain.

Rosie saw a video on TikTok of a 40-year-old woman with ADHD who described symptoms that resonated in her head.

She Googled “ADHD in adult women” and found that it matched most of the character traits described.

It was then that he self-diagnosed as having ADHD. “I read it and cried. It was like reading my diary.”

Fang of Stanford University explains that the formal diagnostic process varies widely around the world and can be quite expensive. Therefore, many people do not follow this formal path, but the expert points out that there are significant benefits to seeking professional help.

“The potential concern here is that sometimes there are sites that diagnose people based on what the parameters say, but actually it’s not as simple as a site diagnosis.”

“For example, people on the autism spectrum sometimes have stereotyped behaviors, such as repetitive behaviors, and this can be confused with the obsessive behaviors in obsessive-compulsive disorder.”

“If you have a misdiagnosis, then you’re basically going the wrong way and that’s why it’s more helpful – if you suspect or someone suspects – to have a diagnosis with a neurology specialist,” he says.

“People on the autism spectrum, for example, sometimes have stereotyped behaviors such as repetitive actions, but they can be confused with the obsessive behaviors of obsessive compulsive disorder.”

According to Fang, “If the diagnosis is made incorrectly, then the person is basically going down the wrong path (of treatment, for example)”. Therefore, says the specialist, if you have any suspicion about yourself or someone else, seek specialized neurological care.

Support on social networks
But this type of diagnosis and medical follow-up is not accessible to many people in different parts of the world.

And because of these obstacles, many people like Rosie Thomas are turning to social media for help.

This is the case of Lyric Holmans, a 35-year-old woman living in Texas (USA) and self-diagnosed with autism.

Youtuber and lifestyle and neurodiversity blogger, she tells the BBC she discovered being on the spectrum at age 29 through social media communities.

Holmans says this hashtag is important because it allows you to ask just about anything you want to know of people with different experiences of autism.

“Identity is invisible, especially if there is no language to explain this life experience,” he says. “It’s really very difficult to quantify these experiences if there’s no image of people like you.”

According to her, with each question asked, soon several people start interacting with each other, sharing experience, helping each other and helping others to ask for help.

It’s harder for women
While social media is making it easier for people to get support, women are still less likely to be formally diagnosed.

Often, doctors and other mental health professionals ignore or don’t know how to correctly identify your symptoms.

In the case of autism tests, for example, Fang explains that “men tend to have more stereotyped, more repetitive behavior, something that is less seen in women. And that makes men much easier to identify with.”

In his research, the Stanford University researcher found much more “camouflage” in women on the spectrum compared to men.

Camouflage (or masking) is the use of strategies to disguise autistic characteristics and compensate for social difficulties associated with them. These strategies can be used consciously or not.

When it comes to ADHD, Fang says there are more women who are the inattentive type and more men who show more of the hyperactive-impulsive type.

“Hyperactive and impulsive students are labeled ‘troublemakers,’ which is why they attract attention.”

Stigma
While it can be more difficult to diagnose women, there is also a stigma to admitting and talking about neurodivergence.

Idowu says that after publicly revealing that she is neurodivergent, many people from all over the world have contacted her.

In addition to receiving messages from women, he also had many black men come forward to say they felt neurodivergent. “Some people are very embarrassed by the stigma associated with ADHD.”

“I was at ComicCon last year. I was speaking onstage and then someone came up to me. I think I was in my mid-40s, and they said, ‘I was diagnosed after reading your blog; I’m autistic.'”

Rach was also diagnosed during the pandemic and considered social media essential tools to face the condition.

“Many people, men, women of all ages, found out they had ADHD during the pandemic,” she says, “I was 26 at the time, and actually in a documentary I watched on Netflix, there was an adult man talking about his struggles with ADHD and how many ADHD medications have changed her life.”

positive outlook
Something that the neurodiversity movement promotes is self-care.

As awareness of mental health has increased in recent years, there has also been more debate and knowledge about health care reaching neurodivergent people as well. This could be a factor that explains why social media has been prolific as a communication tool.

Fang agrees that there has been a big development in the way we feel about these conditions. “This is definitely different from 20 years ago when you didn’t use social media. Today, the stigma of mental illness and neurodivergent illnesses has diminished.”

Everyone the BBC spoke to shared how raising awareness and understanding of their realities helped improve their quality of life.

Some prominent figures also spoke about their own diagnoses.

Tesla and SpaceX entrepreneur Elon Musk said on Saturday Night Live that he is on the autism spectrum. American Olympic gymnast Simone Biles, winner of four Olympic gold medals, has spoken openly about having ADHD.

Another example is model, actress and singer Cara Delevingne, who has spoken extensively about dyspraxia and ADHD.

These celebrity accounts can make more people think about their experiences and, in turn, ask themselves, “Am I neurodivergent?”