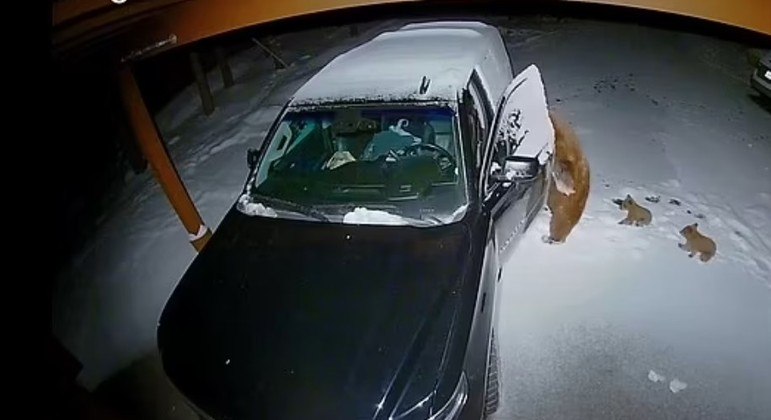 A mother bear did not hesitate and opened a car door to get food for the two cubs. The animal crime was caught in the city of Lake Tahoe, California, famous for being the area where the legendary Hank the Tank played.

In the video, recorded by a home security camera, the mother spots the car — a Chevrolet Suburban SUV — and opens the vehicle’s door, which was unlocked. Meanwhile, the two small shoots wait on top of the snow.


The mother sniffs the vehicle’s seats and dashboard for food. To the sadness of many people on the web, the video is interrupted before it is discovered whether the mother was successful in the endeavor.


According to the KRON 4 network, the May 10 recording is the mother’s second appearance at the same house. In both, she is accompanied by her cubs.

In the first, made nine days earlier, she opens the car in the same way and comes out with a bag that appears to contain some food.

The protective mother’s action is nothing compared to the famous Hank, who was hunted by the Department of Wildlife to be sacrificed and was accused of breaking into at least 28 homes.


Luckily for the animal — gigantic, weighing an estimated 225 kg — a DNA analysis revealed that two other large bears are also at work in the city, which lessens the urgency of capturing it.

The decision to give up the death penalty for him has been celebrated by NGOs and animal rights activists, who say Hank never displayed dangerous behavior.