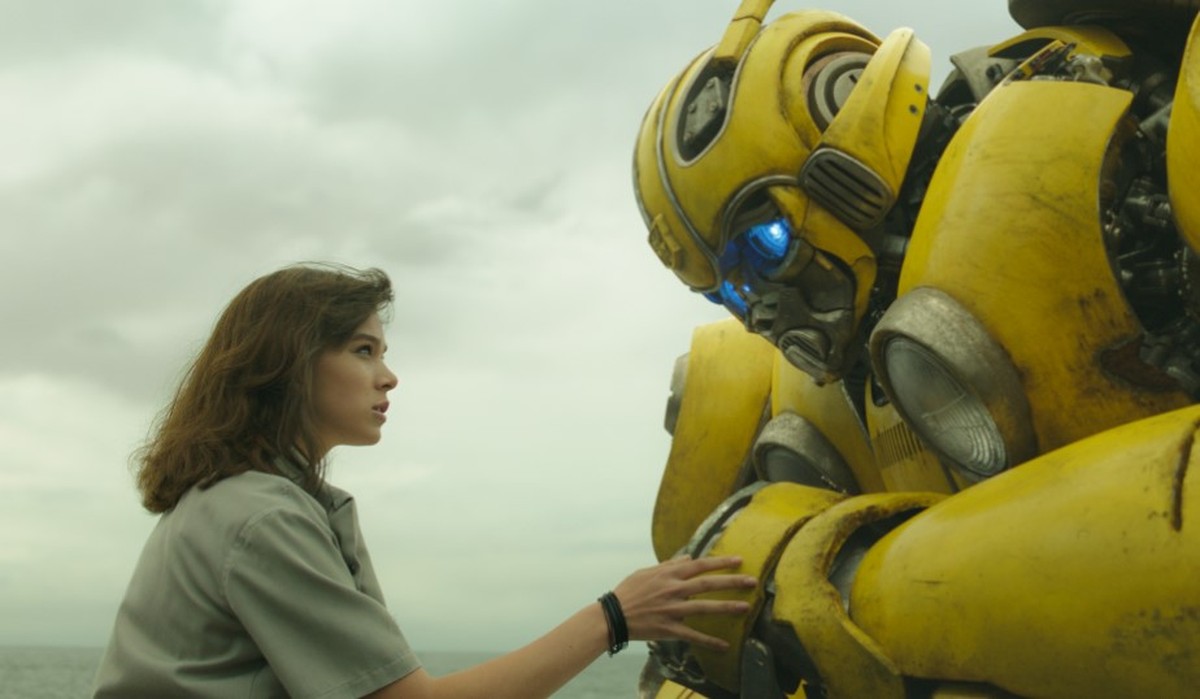 Attraction of the Maximum Temperature this Sunday, 19/6, “Bumblebee” it is a spin off of the Transformers franchise. That is, it tells the story of the friendly yellow robot even before he met Sam (Shia LaBeouf) and explains how planet Earth got in the way of the cybernetic battle between the Autobots and the Decepticons.

The year is 1987 and Bumblebee, still recovering from the ravages of the fight against the Decepticons, leaves his home planet, Cybertron, and finds refuge in the small Californian town of Brighton Falls, in the United States. There, he hides in a junkyard, taking the form of a yellow Volkswagen Beetle. But the robot ends up being bought by Charlie Watson (Hailee Steinfeld), an 18-year-old girl who still suffers from the recent loss of her father and being bullied at school for not being like the other students.

Charlie, who is a mechanic, fixes Bumblebee, who transforms before the girl and reveals his identity. The two become great friends until they are hunted by a government agency.

Check out five facts about the movie Bumblebee below!

In the solo film of ‘Bumblebee’, the robot transforms into a yellow VW Beetle — Photo: IMDB/Paramount Pictures

According to the story told in the comics, Bumblebee and other Autobots ended up crashing on Earth after trying to flee their home planet. They hibernated inside a volcano for four million years the Transformers until the time of the eruption.

After the eruption of the volcano, the robots were freed and began to transit the Earth disguised as machines. Bumblebee transformed into a yellow Beetle, which was a popular car at the time of the film’s story.

Bumblebee would also be a Beetle in “Transformers” (2007), but the production chose to adapt him to a Chevrolet Camaro because the director Michael Bay I wanted to avoid comparisons with another feature, Herbie: My Turbined Beetle.

Speaking of directors, “Bumblebee” isn’t directed by Michael Bay, who helmed the five films in the “Transformers” franchise. Travis Knight was the filmmaker chosen to direct the new feature, although he was, at the time, considered a novice director. Moving away from the “the more explosions, the better”, “Bumblebee” presented itself as a more sensitive film that prioritizes the friendship between the protagonists.

‘Bumblebee’ was the brainchild of Steven Spielberg — Photo: IMDb/Reproduction

During an interview promoting the film, director Travis Knight revealed that “Bumblebee” was an idea of Steven Spielberg after the failure of the fifth feature in the franchise, called “Transformers: The Last Knight”, released in 2017. It is worth noting that Spielberg has always been involved in the franchise as an executive producer.

4 – A protagonist who sings and enchants

Hailee Steinfeld is the protagonist of the movie ‘Bumblebee’ – Photo: Instagram

The one chosen to play the protagonist Charlie Watson was Hailee Steinfeld, actress of Filipino descent and Jewish roots. Hailee started acting at a very young age, at the age of 10. Because of this, she had to drop out of school and was homeschooled from 2008 until 2015, when she finished her high school.

Hailee gained visibility with the film Bravura Indomitita, in 2010. Her performance even earned an Oscar nomination the following year, becoming one of the youngest actresses nominated at the awards.

In addition to acting, she is also a model, singer and does philanthropic work to end hunger in the US. In her music career, Haille has already released two EPs and has been a judge on The Voice in the US.

‘Bumblebee’ managed to do well at the box office after the failure of the last film in the ‘Transformers’ franchise – Photo: IMDB/Paramount Pictures

After the poor performance of the fifth and final film in the “Transformers” franchise, the producers of “Bumblebee” released the feature with a budget well below the previous one. However, the spin off surprised and raised the value of US$ 52 million upon its release.

READ MORE ABOUT THE POP WORLD! ✨👇

Keith Grossman, who as President of Time magazine brought the famous media brand to Web3 …