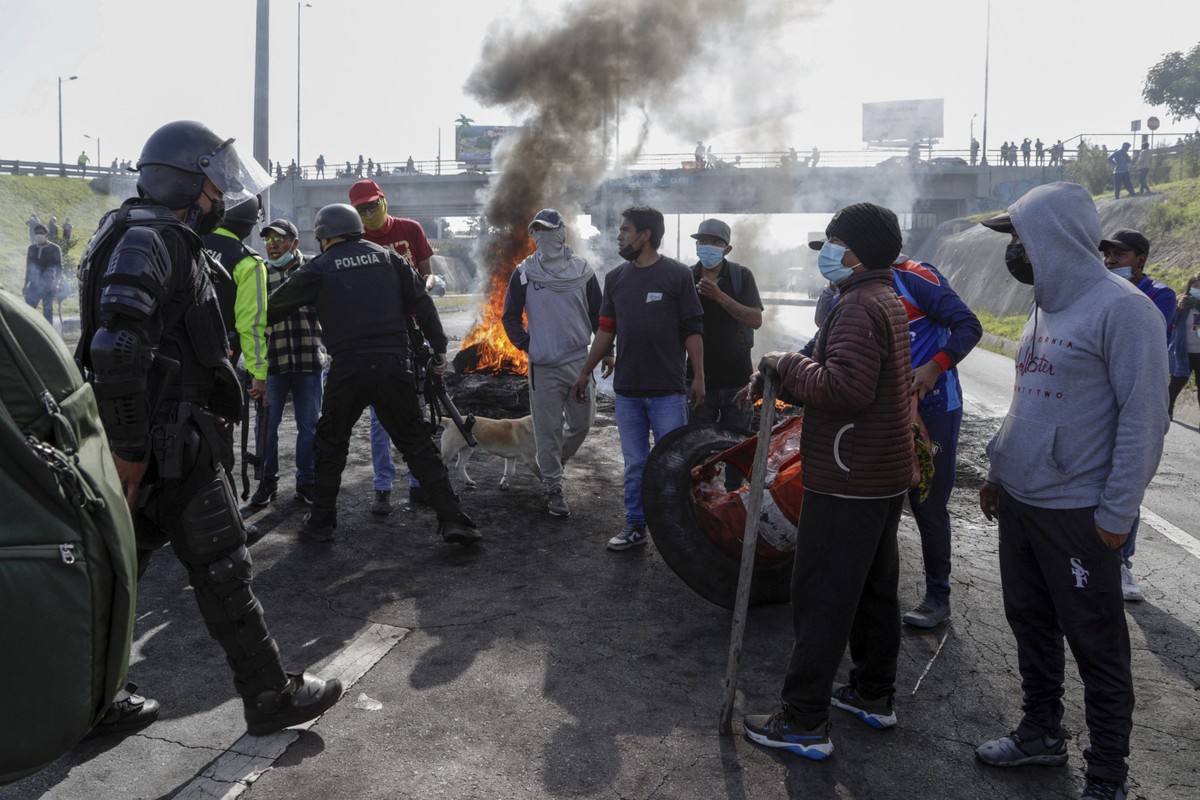 The Ecuadorian government decreed a state of exception to control demonstrations in the country on Friday (17), but even so, the country’s largest indigenous organization closed roads in three Andean provinces on Saturday.

On Friday, President Guillermo Lasso declared a state of emergency for 30 days in Pichincha, Cotopaxi and Imbabura, where protests are taking place indefinitely.

In announcing the measure, Lasso said he was committed to defending the capital and the country. The message was broadcast by radio and television.

Under this measure, the civil right to assembly is suspended.

The Confederation of Indigenous Nationalities (Conaie), the main entity behind the demonstrations, did not end the demonstrations. The president of Conaie, Leonidas Iza, reacted to the presidential decree in the early hours of Saturday: “We ratify the struggle at the national level, in an indefinite manner”.

Demonstrations in the country have lasted six days.

As of Saturday morning, there were lockdowns in 14 of the country’s 24 provinces, according to the state-run Security System ECU911.

Since the beginning of the protests, at least 83 people have been injured and 40 have been detained, according to information from authorities and indigenous organizations.

Conaie reported on Saturday that Iza traveled in a vehicle that was shot.

Conaie participated in social uprisings that deposed three heads of state between 1997 and 2005 and in 2019 – in that last year, the organization led anti-government riots in Quito that lasted more than a week, leaving 11 dead and more than a thousand injured. .

There have been attempts to broker dialogue between the protesters and the government, but so far this has not occurred.

The Church, the UN and universities offered to mediate the conversations.

Protests over the price of gasoline

The trigger for the protests was the rise in fuel prices. Until October 2021, prices were frozen. Since then, diesel has risen 90%, and gasoline, 46%.

Since last year, the entity has proposed that prices be reduced to US$ 1.50 and US$ 2.10, respectively.

Due to the increase in drug trafficking and violence, since April 30, another state of exception has been in force in the coastal provinces of Esmeraldas, Manabí and Guayas. In Guayas there were protests this Saturday.

Lasso has been in power for a year.

On Friday, he announced a series of government measures, such as a $5 increase in a bonus for people in poverty (they will now receive $55), a subsidy of up to 50% of the price of urea for small and medium farmers and the forgiveness of overdue debts of up to US$ 3,000 granted by the state bank for productive development.

Conaie responded that the most important issues were not resolved. However, he informed: “We welcome the points where there is progress. Although they are insignificant, they will help in something” the most needy sectors.

The protesters propose a reduction of ten points, and demand that this list be met before sitting down to dialogue with the government.

Until last December, poverty in Ecuador reached 27.7% of the population and extreme poverty, 10.5%. Rural areas are the most vulnerable.

Previous Calleri “forgets” Copa do Brasil and asks São Paulo to focus on classic | Sao Paulo
Next Tombense beats Novorizontino, wins the first out and approaches the G4