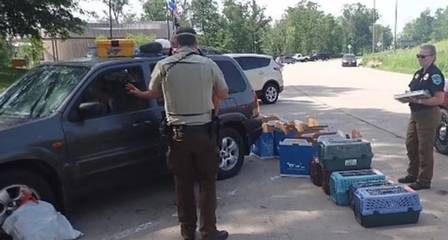 Police seize 47 cats that lived in a car with American

The police seized last Tuesday (14/6) 47 cats that were living in a car with a homeless person. The owner of the vehicle was approached on a road in Harris height, in southeastern Minnesota (USA) after a stop. The man explained that he had lost his house because of debt and, as he didn’t want to leave his cats behind, he decided to live with them in the car., which does not have air conditioning. The temperature was at 32 degrees. The interior of the car had bad sanitary conditions.

The animals were taken for veterinary evaluation and should be put up for adoption, after taking vaccines and vitamins. Cats’ ages range from a few months to 12 years.

The number of car residents was greater. The owner already had given 14 animals for an animal protection organization.

“With the heat, he recognized that the situation was beyond what he was capable of at that moment. And he let us help them.”said Ashley Pudas, of the Animal Humane Society, which accompanied the police in the operation.

The unidentified American did not specify how long he had been living with the cats inside the vehicle.