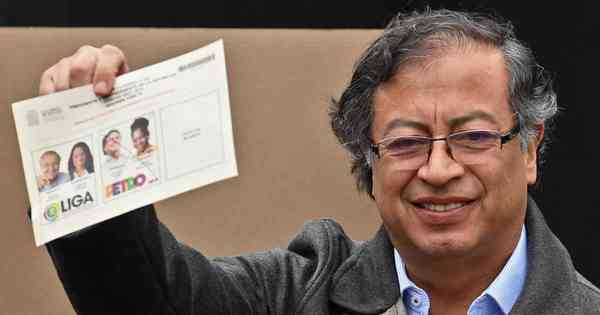 Petro, 62, won the election by 3.2 percentage points over the eccentric tycoon, who quickly admitted defeat.

The senator and former guerrilla beat his opponent by 716,201 votes, after 99.4% of the votes were counted.

“Today is a day of celebration for the people. May the first popular victory be celebrated (…) the day of the streets and squares”, wrote the president-elect on Twitter, celebrating his victory.

At a convention center in the center of Bogot, his supporters exploded with joy upon learning of the result.

“I celebrate because, at last, we are going to have a change, this is something that the territories were waiting for (…) This shows that there is hope”, said AFP Lusimar Asprilla, a 25-year-old Afro academic.

With Petro’s election, Colombia enters a new political era, without a government of traditional parties, defeated in the first round, also won by Petro.

Both candidates reached the second round tied in voting intentions. A very tight result was feared that would trigger protests in the face of suspected fraud that Petro mentioned during the day.

In a Facebook live broadcast, Hernndez accepted the result. “I wish Dr Gustavo Petro that he knows how to lead the country, that he is faithful to his speech against corruption,” she said.

Some 39 million voters were asked to vote voluntarily in a highly polarized environment.

Hardly repressed, the protests of 2019, 2020 and 2021 reflected a deep unease with inequality and the lack of opportunities, especially among young people, and propelled the decline of Duque and later that of traditional forces.

With the pandemic, poverty worsened, which today affects 39% of the 50 million Colombians. Unemployment is close to 11% and informality, 45%.

Among the other challenges that the new government will have to face are drug trafficking and associated violence, with various armed groups spreading across the territory.

Petro and Hernndez arrived at this election with two proposals for rupture and change, but with opposing models.

The winner of the elections proposes to strengthen the State, transform the health and pension system, and suspend oil exploration to make room for clean energy in the face of the climate crisis.

“The country needs social justice to be able to build itself in peace (…) In other words, less poverty, less hunger, less inequality, more rights. If you don’t do that, violence will deepen”, says Petro.

Also during the campaign, he announced that he would reestablish relations with Venezuela, which had been broken since 2019, implement the 2016 peace agreement with the extinct FARC and dialogue with the National Liberation Army, the last recognized guerrilla in the country.

Powerful sectors and the Armed Forces resist Petro for its past and its reform projects, which they fear could affect private property and lead the country to a failed socialism.

With Sunday’s result, the military will have to swear allegiance to a former guerrilla fighter in a country traumatized by a six-decade conflict with far-left rebels.

After a conflicted mandate in front of the Bogot mayor, Petro will have to demonstrate that he is capable of working as a team to govern the country and reach consensus.

He has a “personality that many associate with intransigence, stubbornness and an ego that limits dialogue,” says political scientist at the Javeriana University Patricia Muoz.