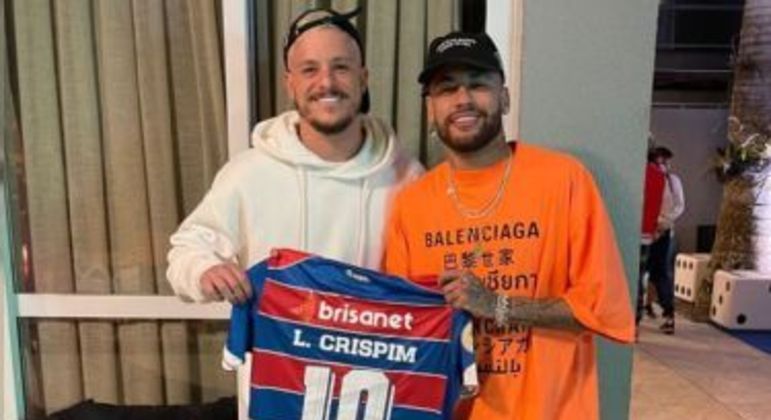 Neymar’s support for Crispim’s revelry only made the situation worse. The revolt over the midfielder’s contempt for Fortaleza increased – Prisma


“You can’t celebrate the birthday of your grandmother, son, wife and especially yours.


“Being an athlete is not easy .


“Being happy can only be done after your career is over, how crazy.”

It was like this, on Twitter, that Neymar gave full support to Lucas Crispim, his former partner in Santos’ youth teams.

Neymar showed yesterday his anger at the fact that the 28-year-old midfielder was removed by Fortaleza.

The reason, which Neymar considers to be banal.

Fortaleza is the lantern of the Brazilian Championship, had lost on Thursday, in Florianópolis to the limited Avaí.

Fans were waiting for the squad to arrive in the capital of Ceará the next day.

They surrounded the players, cursed them, threatened them. And one of them attacked Robson with his motorcycle helmet.

The atmosphere that dominated the club was of pure terror.

But Lucas Crispim didn’t care. Without the slightest sensitivity, contempt for the club’s difficult situation, for the agony of the fans, the midfielder kept his birthday party. For the same Friday. With the right to music, drink, party.

Fortaleza’s leaders wanted to confirm if it was true. The player could not deny it, as there were reports and video on the internet.

On Saturday morning, the board removed him from América Mineiro’s departure, this afternoon. And he must stay away from the group indefinitely.

Lucas Crispim had no respect for the club, for the fans, for his teammates, for Robson.

He is 28 years old, started at Santos’ base, went through Vasco, Joinville, Atlético Goianiense, Ituano, São Bento, Guarani until he reached Fortaleza.

He is old enough to understand the meaning of “image rights” that clubs pay, coupled with salary.

That is, he is not just Lucas Crispim. He is Lucas Crispim “from Fortaleza”, who made a point of partying while his club is plunged into crisis.

Neymar’s support is more than predictable.

The player, who is now 30 years and four months old, follows as a dogma for his life the right to party on his days off, whether the club or the Brazilian team is living the moment they are.

“I fulfill my obligation. I dedicate myself to training and games. My private life is mine”, he tired of repeating.

From there, clubs, poker nights, parties starting at night and ending only at sunrise.

The priority, as a teenager, is to party at night.

Not assuming to be an elite athlete, with a short career, who represents the club, the Brazilian team, wherever he goes. Especially when you go.

Neymar had the potential to be the best player in the world. The odds were languishing with the binge, the sleepless nights. They only aggravated the natural loss of speed, of muscle explosion, the muscle fibers are no longer the same. A tenth of a second makes all the difference to the dribble, the sprint, the positioning of the body at the time of the kick.

Coaches have already changed the Brazilian’s position. Both in the national team and in PSG he is no longer an open striker on the left. He doesn’t have the speed, explosion anymore to act like that. He no longer has the stamina to help with the marking. He started to act as a privileged midfielder, from the middle to the front, only articulating the offensive plays. Like a precocious veteran.

But what brings Neymar and Crispim together is the reaction of the fans and the press of the clubs that pay them.

PSG organizers have already cursed Neymar’s mother. They asked at the top of their lungs for her to leave Paris. French journalists insist on the Brazilian’s lack of commitment to the club. He never in training and games. But in his nightlife, he does not match an elite athlete of world football. And that made the income fall year after year.

He never cared and made a point of posting his binges on social media. Which only consolidated the bad image it has in Europe. Always with the support of his manager, his father.

Neymar is the most expensive player of all time. But he has already lost the spotlight at PSG to Mbappé. Messi was also part of the Brazilian’s popularity.

Neymar, on vacation, continues to party with his pals. And posting pictures, showing off doing what he wants, like a teenager. With just five months to go until the start of the Qatar Cup.

Despite being the great hope of a five-time champion country, which has not won the World Cup for 20 years, the thirty-year-old Neymar promises to enjoy the holidays as usual. Ballads and poker nights around the world.

Criticism of his behavior is artificially tamed on his social media. Your employees prevent, delete comments that do not accept their behavior. Neymar lives on a fantasy island.

With his fellow friends praising him, every move. Whatever.

And enjoying parties they would never be invited to if they weren’t “friends of the ‘boy’ Ney”.

The “support” for Lucas Crispim and his absurd party in Fortaleza didn’t help. On the contrary, it only harmed.

The press and leaders of Ceará know that Neymar is not an example with his binges. If the intention was to mock the club’s management for having punished his friend, it didn’t work. On social media, Fortaleza fans were more outraged by the 28-year-old midfielder.

Neymar neither understands nor wants to understand the career of an elite football player in 2022. The need to respect the club that pays him, the fans that support him, even off the field.

Neymar is still unattainable at PSG.

There’s no point in a club that was structured to be experiencing difficulties, in the Brazilian’s flashlight and player celebrating on the same day that the crowd threatened his teammates and attacked one of them.

And it explains one of the main reasons why it didn’t reach the best in the world.

Crispin couldn’t have a worse defender…

Previous Check out the cutest moments of Nicole Kidman and Keith Urban!
Next Embraer negotiates E2 family aircraft with companies in North America, Asia and Europe