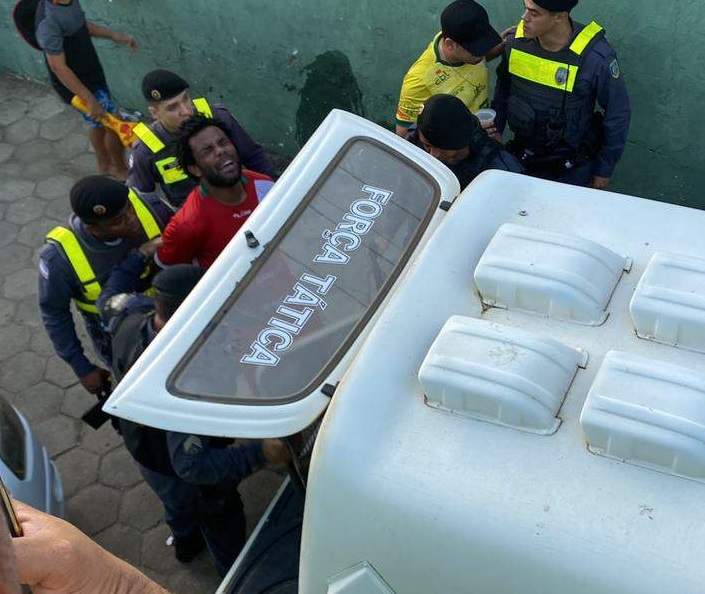 After the final whistle in the great Espirito Santo classic of the tenth round of the Brasileirão Série D, which ended with Nova Venécia’s 2-1 victory at Zenor Pedrosa Rocha, in the Venetian city, a confusion still on the pitch of the game ended with the detention of the defender of the Real Noroeste, Vinícius Leandro this Sunday (19).

The Real Noroeste player left the field handcuffed by the military police who were guarding the match. At the end of the game, the defender went to question the refereeing because of the controversies on the field. However, he was eventually detained for defying the PM.

Read too: With a great goal from a bicycle, Nova Venécia beats Real Noroeste and remains leader in Série D

At half-time, the trio of referees had already been questioned by the visitors, who went to the locker room at a disadvantage by 1-0. At the end of the first half, goalkeeper Merengue Weide was sent off, which would have been the main reason for initiating the claim.

The president of Real Noroeste, Flaris Olímpio da Rocha, even invaded the field of play and was restrained by the athletes, including Vinícius Leandro himself. In the final stage, Real even equaled the score, but suffered the goal of defeat in the final minutes.

In contact with the report, Flaris said that “the club will investigate the images and take the necessary measures”. In addition, the team’s legal team should issue a note on the case.

In a statement, the Military Police reported that a team was escorting the refereeing group to protect the referee at the end of the game, due to the excited mood of the players, when one of them, very nervous, tried to break the block to fight with another player, being prevented by the soldiers who demanded that he withdraw from the scene.

“However, when he left, the man cursed and disrespected the police, who gave him a voice of arrest. The player resisted police action, inciting other people to stop his driving, making it necessary to progressively use force to restrain him. The man was referred to the Regional Police Station, where he confirmed that he had acted improperly and apologized to the team. He signed a Detailed Term and was released,” he said.

The result left Nova Venécia in the lead of group 6 of Série D 2022 with 19 points and very close to the average score that teams need to advance to the second phase of the competition.

On the other hand, Real Noroeste reached the seventh straight game without a win, also counting games in the Espírito Santo Cup, dropped to fourth position in the group and sees the spot in the G4 being threatened.

Previous The Day of the Hot Screen Bombing (20/06): Considered one of the best films of 2016, thriller is inspired by a real case
Next For betrayal, man leaves cell phone with note to technician: ‘help me’