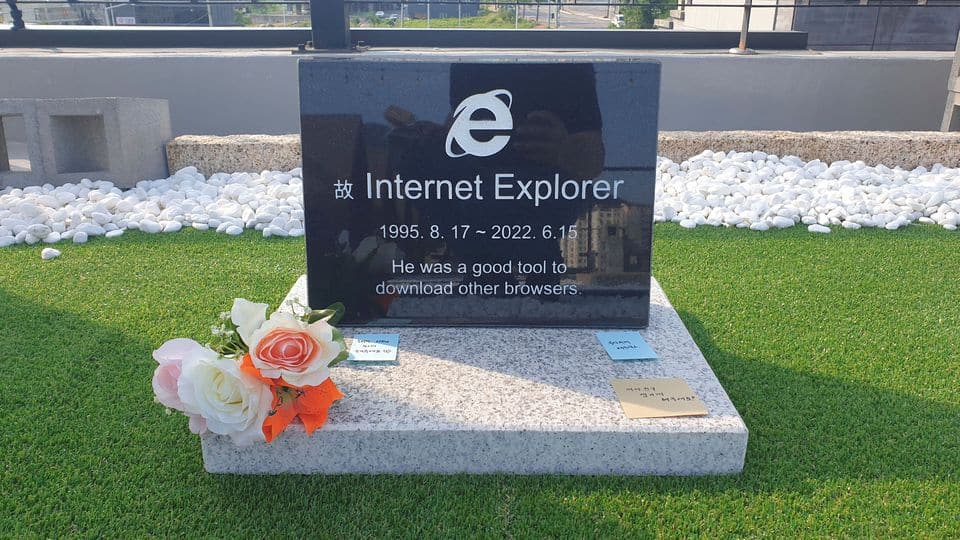 Microsoft’s decision to finally retire Internet Explorer marked the end of a love-hate relationship for many users. One of them was South Korean software engineer Jung Ki-young.

To celebrate the death of the browser, the IT professional spent US$330 — just over R$1,700 at the current rate — to order a tombstone with the browser icon and the following sentence: “He (Internet Explorer) was a good tool to download other browsers”.

Jung said to Reuters that the initiative was a way of expressing his feelings for the software, which played an important role in his career as he dominated the market.

The memorial was displayed in a cafe run by the engineer’s brother, since then, photos of the tombstone began to circulate on the internet.

Internet Explorer has been discontinued after 27 years

It is worth noting that Microsoft chose to discontinue official support for Internet Explorer last Wednesday (15) after 27 years. The idea is to focus its efforts on its successor, Edge.

According to the developer, it was more complicated to ensure the compatibility of projects with Explorer than in other browsers. Still, customers kept asking to keep their sites running in IE.

The idea was to make people laugh with the headstone, however, Jung was surprised by the scope of the joke: “The Explorer allowed me to make a world-class joke,” he said. “I’m sorry you’re gone, but I won’t miss you.”

Launched in 1995, Explorer held the position of the most used browser on the planet for more than a decade, however, it began to lose ground to rival Google Chrome in the late 2000s.

Previous Fluminense vs. Cruzeiro: Pezzolano praises Diniz and points out differences in relation to his rival in the Copa do Brasil | cruise
Next 10 books about real women on sale on Amazon; check out