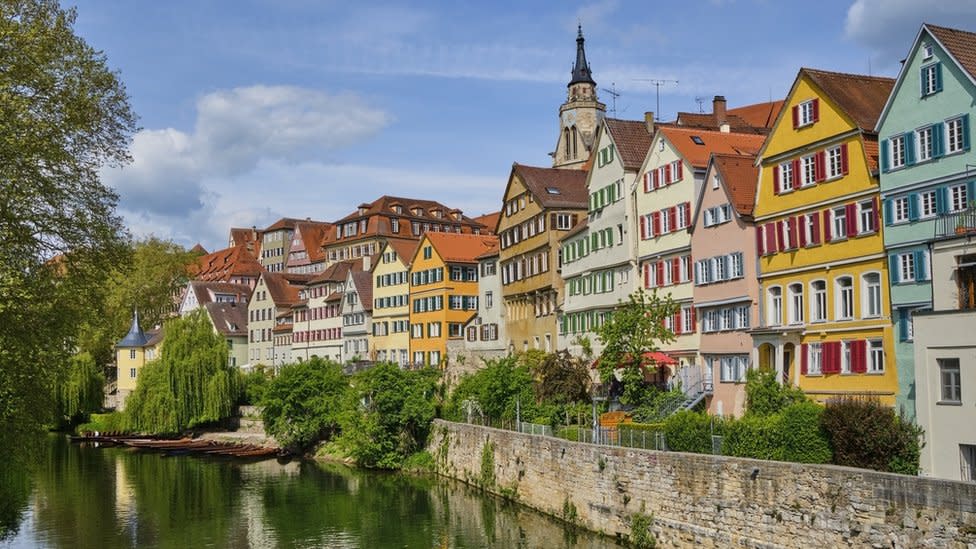 The vegan and environmental city sued by McDonald’s

In southwest Germany, nestled between the Swabian Alps and the densely wooded Schönbuch nature park, is Tübingen, a university town that would put most Disney scenes to shame.

The town is built around the almost perfectly preserved old town, with its cobblestone alleys, old wooden houses and undulating canals. (While the historic centers of most German cities were destroyed during World War II, only one bomb fell on Tübingen.)

The Neckar River flows through the center of the city, forming a small island — Neckarinsel — which is covered in flowers in spring and glows golden in autumn.

Tübingen is in Swabia, a German region famous for its frugality — and which is also one of the sunniest spots in the country, making it considerably happier than other parts that have a more cloudy and rainy climate.

As an academic city, it is small but still dynamic.

“For the size of the city, I find it incredibly international,” says Nele Neideck, who runs an expat community.

I was in Tübingen for the first time eight years ago to visit a friend and, at first glance, the city looked like a fairy tale, with its idyllic landscape and youthful atmosphere — of the 90,000 residents, more than 27,000 are students at the University of Tübingen. .

We cross rushing rivers, feast on Swabian specialties and travel to parties in buses full of students.

When I said goodbye to this peculiar city, I never imagined that years later I would return to live in it.

But that’s what Tübingen does: it attracts you, and before you know it, the ease of living in such a small, vibrant place like this makes you never want to leave.

However, this is not all that characterizes Tübingen: it is also an innovative, green city and allows for alternative lifestyles.

To contextualize the city’s uniqueness, Tübingen was one of the centers of the 1968 German student protests that took place across West Germany against traditionalism and authority, which influenced the city’s leftist and environmental sensibilities.

“In Tübingen, there are self-governing housing initiatives, where meals and grocery shopping are collectively organized, and are mostly vegan,” explains Jenny Bröder, who has lived in Tübingen for 12 years and works at the university.

“The people who manage and live in these villas are often politically active, cultivate an awareness of social and ecological issues, and contribute to the cultural scene by organizing concerts, lectures, festivals and parties. The food offered at these events is also usually vegan.”

In fact, a lot of people I’ve met since moving here are vegetarian or vegan, and it’s as common to ask if anyone eats meat as it is to ask if they have an allergy.

Tübingen is even one of the official participants of Veganuary, the annual challenge that encourages people to go vegan in the month of January.

“Our vegetarian offer of the day sells out much faster than the meat offer,” says Alok Damodaran, who runs a South Indian food truck in the city.

This is significant in a country that is known for its sausage.

Green politicians have been part of the District Council since 1979. And with a third of its population being students, the city is home to an educated community that is environmentally conscious.

It is this young and energetic spirit that allows sustainability to be functional.

For example, Amelie Dietenberger and Kajetan Krott started making vegan banana bread during the Covid-19 pandemic — first making individual deliveries, then turning it into a business that supplies multiple cafes.

“Tübingen has a certain feeling of being green and happy, and it has a lot of young people, which fits our project,” says Dietenberger.

“People are so supportive because it’s a local initiative and they especially appreciate that we deliver in an electric car.”

Sedat Yalcin opened Ada Bakery in the city after doing an exchange program several years ago, and now runs it with his wife, Aysenur-Sarcan Yalcin.

While Germany is famous for its doner kebab and shawarmasat the Yalcin bakery practically all the food is vegetarian or vegan.

There is boreks (a kind of puff pastry) delicious stuffed with spinach, potatoes, eggplants, tahini and cheese, as well as simitsa round Turkish bread, and hearty salads.

“Every night everything ends,” reveals Yalcin.

“A Turkish vegetarian bakery works here because of all the students, but also the people from here who care about the environment.”

Tübingen is also constantly being revitalized and modernized to be increasingly eco-friendly.

A decree passed in February 2022 declared that cars will no longer be able to drive on the city’s central street, which will be reserved for buses and bicycles.

Students can ride the bus for free on weekends and after 7pm every night, while bus travel is free for everyone on Saturdays. (The local government even plans to make buses free at all times.)

Tübingen spends three times more per capita on bicycle infrastructure than Copenhagen, Denmark, according to Boris Palmer, the city’s mayor.

And in early 2022, Tübingen tried to elevate the city’s green status even further by imposing a new tax — and becoming the first city in Germany to implement it.

The so-called Verpackungssteuer (packaging tax) provided for an extra payment of fifty cents for any disposable packaging, such as coffee cups, ice cream pots and meal plates. In the case of disposable cutlery—such as forks, knives, and spoons—the cost was twenty cents more.

Even pizza boxes and the foil used to wrap a takeaway falafel were taxed.

Regardless of whether they were made from sustainable or recycled material, anything single-use was more expensive, based on the principle that non-production was better than recycling or disposal in the future.

The tax got off to a promising start: the first few weeks resulted in up to 15% less waste in city dumps.

Initially, both Tübingen residents and businesses rose to the challenge.

People started to get into the habit of bringing their own cutlery, and restaurants started providing reusable dishes.

“I stopped stocking up on disposable plates,” said Naresh Taneja, who has owned the vegan Indian restaurant Maharaja in Tübingen for 30 years, when the tax was implemented.

“We were already encouraging our customers to bring their own lunchboxes, and this tax helped even more.”

According to Yalcin, the local government provided assistance for them to meet the packing tax and helped them buy dishwashers and reusable cutlery.

But the rule was not well received by Tübingen’s only McDonald’s, which sued the city over the tax.

With more than 1,500 restaurants across the country, McDonald’s says it’s difficult to customize solutions and advocates a uniform structure, rather than different rules between cities.

“We agree that the best packaging is the one that is not produced first. But the special local paths of individual cities or communities impede a nationally successful and implementable concept,” said a company spokesperson, as the company tests for a proprietary reusable packaging system.

The case was heard in March, and McDonald’s was victorious – but appeals can be made.

It is not, however, the first time that McDonald’s has shown itself to be an obstacle to this type of movement. The packaging tax was proposed in the German city of Kassel in the 1990s, but a lawsuit by McDonald’s overturned the attempt.

“We believe that a city has the right to create such a tax, and even a big company has to accept that. I can’t believe why an international company can’t switch to reusables when all small businesses can do that,” he said. Palmer, before the case goes to trial.

Appointed mayor in 2007, he is considered by many to be responsible for shaping Tübingen’s green policies, such as mandatory solar PV on rooftops and free Saturday buses.

“We’ve seen a 40% reduction in carbon dioxide emissions per capita in the last 15 years, while the economy of Tübingen has grown by 40%,” he says.

“This gives us hope that there may be a way to overcome global warming and keep growing.”

While many lessons can be learned from the Tübingen model, it may be difficult to replicate the city’s achievements as they emerge from a unique backdrop of political and social support.

Some fear that Tübingen is in danger of going too far: a 2011 Spiegel article described the French Quarters, one of the city’s — and the country’s — greenest neighborhoods as a “green hell”, presenting its residents as bigoted and hypocritically sustainable. .

Furthermore, many feel that Tübingen is too academic to be considered a real-world example.

“You’re going to be very much in the academic bubble if you live there,” says Kathi Winkler, who lived in Tübingen for several years before moving to Berlin.

However, the example of Tübingen shows that paving the way for a greener planet can be achieved on a small scale, proving that small can be powerful, beautiful and inspiring.

read the original version of this article (in English) on the website BBC Travel.

– This text was originally published in https://www.bbc.com/portuguese/vert-tra-61781606