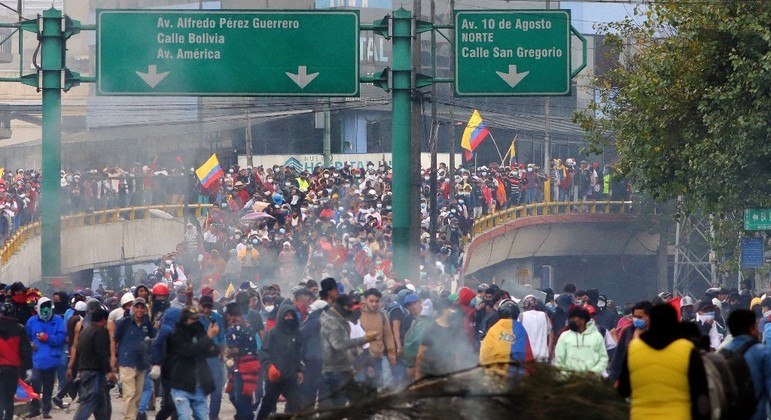 Ecuador: Indigenous people charge fines for those who refuse to participate in anti-government protests – News

Ecuador faces great demonstrations against the government of President Guillermo Lasso 10 days ago. The mobilization on the streets of several cities has as one of its main demands the reduction of fuel prices and is being led by Conaie (Confederation of Indigenous Nationalities)

In less than a year, the country has had large increases in the value of fuel and has already registered a 90% rise in the price charged per liter of diesel, used mainly to fuel trucks, buses and tractors.

Professor Fábio Borges from Unila (Federal University of Latin American Integration) explains to the R7 that the Ecuadorian indigenous community is well organized and could even lead the country to a coup d’état against the government of Guillermo Lasso.

The professor explains the reason for the instability of the Latin American country. “It was sure that there would be a problem. With the pandemic, crisis in Ukraine and the return of hunger and inflation, there is a risk that there will be no way out of this conflict and culminate in a coup d’état.”

A Brazilian woman who lives in Otalvo tells, in an exclusive interview with R7, who was forced by indigenous people to participate in the protests taking place in the country. According to the source, who asked not to be identified, the protesters are threatening city residents with fines, cutting off electricity and water supplies, and even putting up barricades in front of the garages of the houses to prevent cars and motorcycles from leaving. .

The Brazilian says that she went to the protests on two occasions for fear of reprisal from indigenous groups. However, on other days she chose to pay the fine of 20 dollars (R$ 103) imposed by a woman nicknamed “President”.

“Since this strike started, I have three options: go to the protest site, run out of water and electricity, or pay a fine of 20 dollars. They claim that they do this for our good, so that when the helicopter passes, there will be a lot of people on the street.”

Married to an Ecuadorian, the Brazilian says that one of her daughters was hospitalized with pneumonia and is now at home finishing her treatment. Despite this, protesters are still demanding that she attend the protests or pay the fine.

“I spent six days in the hospital with her, I have a prescription, report and everything. But they don’t care. I find it unfair, being forced to fight, to leave, to do things against my will.”

“They want the government to lower fuel prices, they threaten to stop the country by interdicting roads and they succeed. The government has already declared a state of exception. We will have victims and the problem will get worse”, he concludes.

Reports similar to that of the Brazilian circulate on social networks. Ecuadorians say they were extorted by people allegedly linked to the protests and that Conaie wants to invade water treatment and electricity generation plants.

Conaie used the official profile on Twitter to ask the protesters not to promote violent protests, which would equate them with the government of Lasso.

“With collective conscience, we defend the points of the legitimate protest agenda. The government imposes repression, we are not going to play the game of violence, we are not going to generate any vandalism or chaos. We will demonstrate the organization of the Indigenous Movement.”

Previous Cryptos Today: Bitcoin Struggles to Hold $20K Amid Mixed Investor Behavior; altcoins retreat up to 21%
Next where to watch, schedule, lineups and refereeing