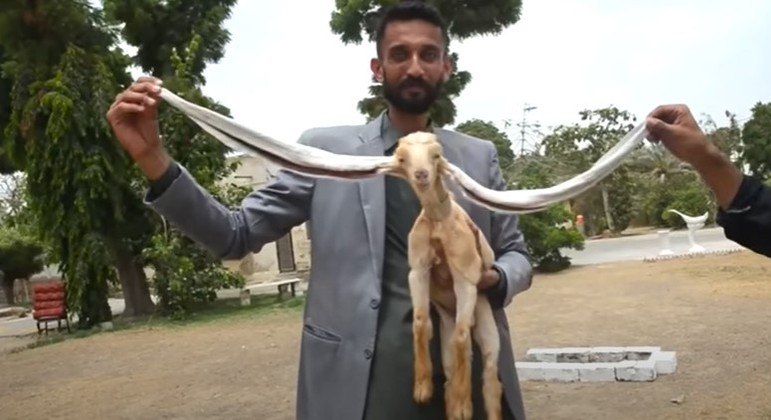 A goat in Pakistan was famous for having a curious appearance. The puppy was born in early June on a farm near the city of Karachi with ears measuring 48.26 centimeters, almost half a meter each.

Despite the affectionate nickname of Dumbo, a reference to the Disney character who is an elephant with giant ears, the name chosen was Simba, another reference to a character from the American studio, immortalized in the movie “The Lion King”.

However, whoever thinks that this is the maximum size of the pet’s ears is wrong. Even though they are already long enough to drag along the ground, they will continue to grow into adulthood.

The goat’s owner is Muhammad Hassan Narejo, who has become a local celebrity, claims that Simba’s ears are the biggest in the world. “We hope that soon, Simba will be a Guinness World Record holder.”

Currently, there is not a goat that has been recognized for the exaggerated size of its ears, but certainly the Pakistani goat has a big advantage.

The ears of Nubian goats, the same breed as Simba, are already larger than average compared to other goats and are the result of many years of evolution. This physical characteristic helps the animals cope with the high temperatures of Pakistani summers.

It is believed that Simba has some rare genetic mutation that causes his ears to grow so big.

Previous ‘Say the election was rigged and leave the rest to me’, Trump urged prosecutors after defeat
Next “Make it prevail”; Scarpa ‘slaps his face’ after Shock-Rei, points to a problem for the defeat and sends a message