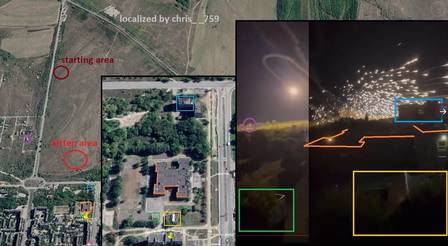 The Russian Army experienced a bizarre episode of “fire friend” in the Ukrainian war. The surface-to-air missile system suffered a launch failureor in Alchevsk (Luhansk, Ukraine), and the projectile ended up returning to the starting point in a boomerang effect, causing a huge explosion.

The region is under occupation by pro-Russian separatist forces and is on the front lines of the war in Ukraine.

The unusual episode was recorded in the early hours of Friday (24/6), according to Ukrainian sources. The shot was aimed at intercepting a Ukrainian plane that was approaching, told a report in the “Sun”.

However, seconds later, the missile was returned to the sender after the tracking system crashed.

There is no information about casualties in the explosion. The area is not far from residential buildings.

The conflict has now lasted four months, with tens of thousands of civilian and military dead.

in #AlchevskRussian air defense worked on its own. #Ukraine #RussiaUkraineWar pic.twitter.com/uYxrBFzMiY

Despite immense military superiority, Russia has faced several reports of problems with logistics, including the distribution of food to soldiers and equipment. The Alchevsk fault produced several memes, with netizens deriding the Russian war “supremacy”:

Previous After Cruzeiro’s agreement, Ronaldo shoots: “Homophobic is not welcome in our game” | cruise
Next A24 cut in several sections in July for the filming of “Fast and Furious” | Movie theater