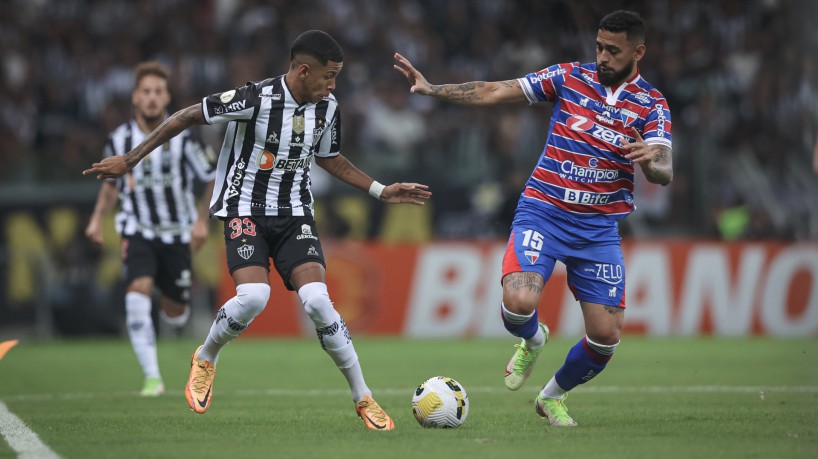 Fortaleza lost to Atlético-MG in Mineirão, on the night of this Saturday, 25th. After having built a difference of two goals in the first half, Leão suffered with the air game of Galo and ended up defeated by 3 to 2.

The game had not even started, when Romarinho hit a beautiful kick from outside the area, just 3 minutes into the game. Having opened the scoring early allowed Fortaleza to bet on a reactive game strategy, leaving possession with Atlético-MG and betting on ball recovery and quick transition.

With the low lines, Fortaleza alternated the tactical scheme with which they defended, sometimes betting on a 5-4-1, sometimes on a 5-2-3, but always with five players in front of the large defensive area. Galo tried to penetrate with tables and individual plays, but without success.

In one of the solo attempts, in the 28th minute, Réver was disarmed by Felipe and the ball fell at Moisés’ feet, who had a teammate on each side. The counterattack was pulled with equal numbers (three against three) and at the entrance of the opponent’s great area, Romarinho, who was advancing on the left, received a pass and finished with a left foot, increasing the score.

Coach Antonio Mohamed removed defender Júnior Alonso and launched forward Vargas, but saw Fortaleza almost score the third, after a corner kick, in the 35th minute. That’s when the patience of the miners ended up touching the ball in search of space. Crosses and shots from outside the area began to appear.

The most that could be achieved, however, was a deflection by Sasha in the penalty area, with the tip of the boot, which Boeck caught easily, and a long shot from Vargas, which the tricolor goalkeeper caught in two halves.

There was still time for Ronald to land a long-range throw for Pikachu and the right winger to come face to face with Everson, who made the save.

At the return of the break, Galo returned with midfielders Otávio and Rubens, in addition to striker Fábio Gomes. The idea was to increase the pressure on Fortaleza and the team started to finish more, but without quality. With 20 minutes, Atlético-MG had finished five times, more than in the entire first half, however all the shots went out.

The Tricolor continued well in the tackles and marking, but could no longer fit in counterattacks. The solution was to bet on shots, but no forward received the ball in a condition to finish.

The hosts were more dangerous in the air game. At 26, Igor Rabelo headed a ball crossed by Guilherme Arana, but Boeck was attentive and held it. At 30, however, Rubens used his forehead to finish Vargas’ lift, close to Leão’s right post, and no one prevented the ball from entering. With the goal, the Galo crowd woke up in the stands.

Gastón Liendo, who replaced Vojvoda at the edge of the lawn, launched Lucas Crispim and Valentín Depietri onto the field. The substitutions had no effect and Leão ended the second half without threatening the opponent.

Galo, on the other hand, kept pressing and at 41 minutes got the tie, in another aerial move. In a raised ball in the area, Igor Rabelo fixed his head to Réver, who also headed and sent it to the net.

It looked like the game would end in a tie, but in the 51st minute came the turning point. In a foul charged by Arana, Vargas headed and Jussa, who had just entered, deflected against his own goal. The referee took too long to confirm the goal by checking the VAR, which validated the bid.

Previous Burkinis banned in this city’s swimming pools for “merely satisfying a religious requirement”
Next Study reveals how to lose weight and not gain weight again; nutritionist comments