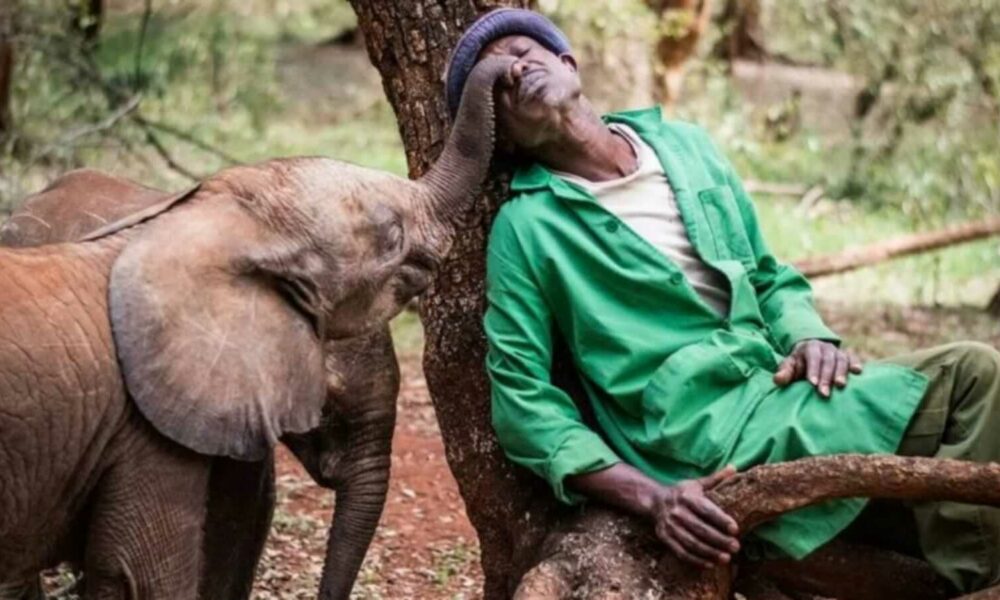 Sunyei is an elephant rescued from the African desert when she was just a week old, sadly orphaned after losing her mother. A baby elephant can face many risks if abandoned. But Sunyei’s fate changed completely when she met wonderful people who helped her grow into a healthy and strong elephant.

The Sheldrick Wildlife Trust is one of the pioneering wildlife and habitat conservation organizations in East Africa. So they rescued the elephant to take care of. It was there that the animal met Benjamin, a man who, with his infinite kindness and love, does an amazing job as a guardian.

In a way, Benjamin fulfills the role of mother to orphaned elephants like Sunyei. “He organizes the care and well-being of the orphans and ultimately ensures that they are always happy and healthy,” commented Rob, director of the organization.

Thanks to man, Sunyei managed to grow a happy and healthy elephant. Also, from him and other caregivers, she learned what she needed to survive in the wild. However, the elephant formed a special bond with Benjamin. They seemed to be linked in some way, and have been best friends for years.

When she was ready to start her life in the wild, even surrounded by other elephants, Sunyei never forgot the one who did so much for her. Surprisingly, about two decades after the rescue, the elephant decided to leave the wild to visit her faithful friend Benjamin. But she didn’t come back alone, Sunyei brought her own cub with her so the man who raised her could meet him.

“A fully grown wild elephant had the desire to introduce the new baby that morning to the human family who raised him says a lot about his intelligence and his sense of family: we can’t think of any other reason than her. She returned safely to show her new baby to her caregivers, with whom she still has close ties,” Rob said.

The organization happily filmed the emotional moment when Sunyei is reunited with her guardian. “Simply magical. Primary caretaker Benjamin meets an orphaned elephant he helped raise, successfully returned to the wild but returned to greet him,” they wrote in a Twitter post.

After the reunion, everyone in the organization was truly amazed. It’s been just over 10 years since the elephant returned to the wild and 20 years since she first saw the man who took care of her. Despite all the years, Sunyei has never forgotten Benjamin, with whom she undoubtedly has a beautiful bond.

Since then, Sunyei has come back quite often to find her caretaker. Perhaps the elephant sees Benjamin as the best foster parent for his baby. According to the organization’s members, it’s really gratifying to see Sunyei come back.