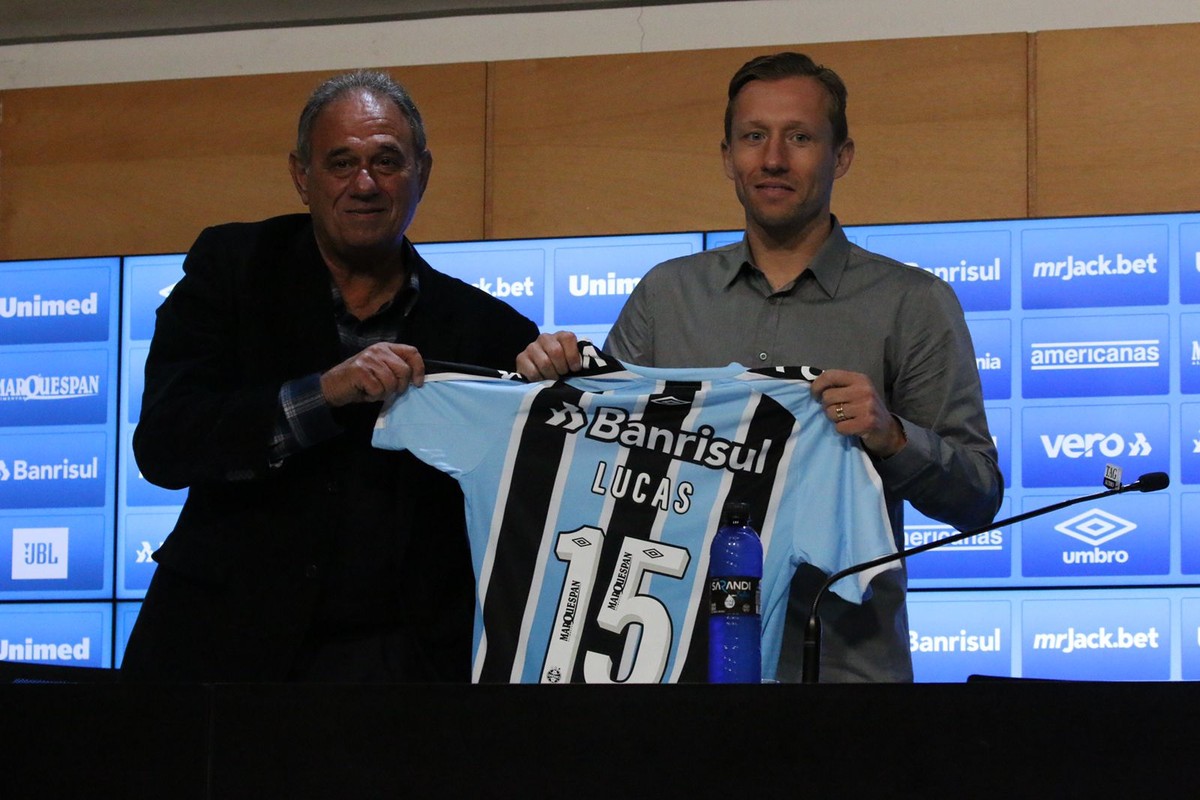 Lucas Leiva is introduced at Grêmio and explains his desire to return to the club: “It doesn’t matter where he is” | Guild

The steering wheel Lucas Leiva was officially presented by Grêmio this Tuesday afternoon. The player returns to the club 15 years after leaving Porto Alegre for Liverpool. At 35, he signed a contract until the end of 2023.

The steering wheel received the number 15 shirt from the hands of President Romildo Bolzan Júnior and the vice of football, Denis Abrahão. The number is the same as when he joined the professional team, in 2005, and which he wore in the famous Batalha dos Aflitos, a game that guaranteed the club’s return to Serie A that year.

In his first speech as a Grêmio player on his return, Lucas highlighted the importance of the club in his career and said that he always had the desire to return, now fulfilled, even with the team again in the second division of Brazilian football.

– What made me come back the most was the desire to be able to contribute and maybe end the cycle of my career where I started. I had this dream, in football maybe things don’t work out, but the moment has come and honestly it doesn’t matter where Grêmio is, what matters is having this opportunity again to represent this team that means so much to me – he highlighted.

Promoted to professionals in 2005, at age 18, Lucas remained at the Rio Grande do Sul club until mid-2007, when he was traded to Liverpool. After a decade in England, he signed with Lazio, where he has played for the last five seasons.

Talks to return to Grêmio started in February, according to the player himself. For him, the situation of the team in the field went beyond the financial question.

– First I need to understand the team, it’s the most important thing and nobody wins anything alone, I’m not going to do anything alone. I had contact with Geromel, Roger, other people, fans who are close to the club who also helped me a lot. It took months of conversations with a lot of people to help me make this decision,” Lucas said.

At the age of 35, the player has signed a contract until the end of 2023. He was free on the market after ending his contract with Lazio and will be available to debut from July 18, the day of the transfer window.

In his first spell at Grêmio, the midfielder played in 77 games, with eight goals scored, and won the Série B and the Gaucho double championship.

“In my last years, I was the first midfielder. It also depends on the system, the way Roger will set up, he will want to count on me. I played some defender games, but it was as an emergency.”

“I don’t think. If I did, I wouldn’t even be here. Obviously football comes to an end and there’s no way to play forever. The question of giving in is that I had one thought in terms of a contract and Grêmio another. today to extend it. I planned to return to Grêmio and I hope I don’t leave anymore. This is my goal”.

“I didn’t even realize that there is so much in common. Then I started to like it more. It was a special number. I used it in my first year as a professional and I was away for 15 years. I’m not much of a superstition, but if there’s something to help, I accept. I’m sure it will be more special”.

“My last game was on May 22, when the season ended in Europe. I’ve been doing maintenance training alone, but with the team it’s different. Open”.

“I am convinced that this group is strong. There is a mix between young and experienced. I can be another important piece and be a support. As they did with me at the beginning of my career. The request I made to the fans is that we are even more united and that opponents feel it when they play at the Arena. Grêmio is much stronger when they have unity. Tomorrow I’ll be at the Arena watching and cheering. I expect a great party. The team has shown itself to be solid. The results have not been the best, but they are horrible. It’s about winning tomorrow and having the peace of mind to get on with work”.

Previous Vanessa Hudgens returns to the school where ‘High School Musical’ was recorded
Next Apple is expected to launch more than ten products later this year; check the list