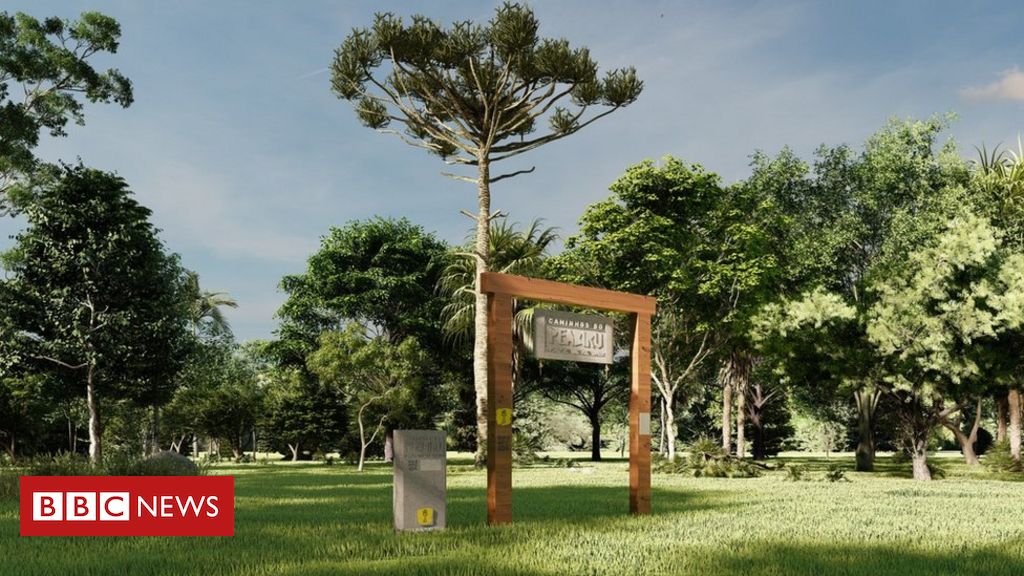 Peabiru Path: the fascinating indigenous route that connects the Atlantic to the Pacific

Ripe guavas and carambolas on the ground stick to the soles of my boots, forming a sweet fermenting mass as I stroll through the quiet town of Peabiru, with its 13,000 inhabitants, 500 km from Curitiba.

I had traveled to the state of Paraná, not far from the Paraguayan border, in search of the remains of the Peabiru Path — a 4,000-kilometer-long network of trails connecting the Atlantic Ocean to the Pacific, built along millennia by the indigenous peoples of South America.

The Peabiru Way was a spiritual route for the Guarani people in search of a mythological paradise. And it also became the path towards the continent’s treasures when European settlers arrived in search of access to the interior of South America.

But most of the original path has disappeared, consumed by nature or turned into highways over the centuries. Only in recent years has this fascinating route begun to reveal its mysteries to the public, thanks to the development of new sightseeing tours.

It’s easy to understand why this transcontinental trail so easily captures people’s imaginations—a fascination that goes back to the first European known to walk its entire length: Portuguese navigator Aleixo Garcia.

Garcia was shipwrecked on the coast of Santa Catarina in 1516, after the failure of a Spanish mission that intended to navigate the Rio da Prata. He and half a dozen other navigators were welcomed by the receptive Guarani Indians.

Eight years later, after hearing stories about a path that led to a mountain empire rich in gold and silver, Garcia traveled with 2,000 Guarani warriors to the Andes, some 3,000 kilometers away.

Brazilian researcher Rosana Bond, in the book The Saga of Aleixo Garcia: the Discoverer of the Inca Empireclaims that Garcia was the first known European to visit the Inca empire in 1524—about a decade before the arrival of Spanish conquistador Francisco Pizarro, widely known as the “discoverer” of the indigenous people of the Peruvian Andes.

The trails that came from Brazil connected to the network of Inca and pre-Inca roads through the Andes, which today receive many visitors, but the Peabiru Way itself left few traces.

This lack of physical evidence has not only led to divergent theories in academic circles as to who created it and when, but has also spawned widespread speculation about its possible creation by the Vikings or Sumerians — or even the Apostle Thomas, allegedly coming from an evangelizing mission in India. .

Some theories claim the trail dates to around AD 400 or 500, while others suggest it dates back to 10,000 years ago to Paleo-Indian hunter-gatherers.

“The Peabiru Way was the most important transcontinental road in pre-Columbian America, linking peoples, territories and oceans”, says archaeologist Cláudia Inês Parellada, who has published several studies on the subject and coordinates the Archeology Department of the Paranaense Museum, in Curitiba, where many of the finds from the archaeological excavations of the trail are housed.

Theories differ not only about the time of its creation, but also the exact location through which the route passed. “We will always have several possibilities”, explains Parellada. “It’s hard to be sure about the full path because it has changed over time.”

But the name and legend at least lives on in the town of Peabiru, built in the 1940s, where local government and volunteer groups recently created and demarcated hiking trails inspired by the Peabiru Way.

They are part of an ambitious tourist plan in Paraná launched in 2022, to map a probable stretch of the Way with up to 1,550 kilometers for cycling and walking, crossing the state from the coast and passing through 86 municipalities, to the border with Paraguay.

I traveled to Peabiru to see at least one of these paths: a trail through the forest that includes seven waterfalls along the course of one of the rivers in the region. The riverbanks were almost certainly part of the Way, as my guide Arléto Rocha informed me as we walked, passing over and under fallen trees and then knee-deep in the cold river water, brushing the spoiled fruit from the soles of my boots.

Not content with only wetting his boots, Rocha dove with his clothes on into one of the waterfalls. He then pointed out locations where he had found arrowheads, mortar, stone carvings and other archaeological gems over the past decade, which are now on display at the newly opened Municipal Museum “Caminhos de Peabiru”.

Most of the forest walk, like the rest of the way along the Paraná, is symbolic — the best possible estimate of where the original trail may have been, despite the certainty in some parts, especially where there are historical maps and archaeological sites.

This region of southern Brazil has been a site of archaeological excavations since the 1970s, in search of remains of the Peabiru Path. Likewise, there was also a dense indigenous population there (a peak of around 2 million people, mainly Guarani, is estimated in the 16th century).

Like many others I spoke to, Rocha is fascinated by the trail’s mystery and has even written his master’s thesis on the subject. Historians, astronomers and archaeologists have also been grappling with this puzzle for decades, piecing together ancient maps, colonial records and oral histories to try to understand the origins and purpose of the path.

The consensus is that the network’s main path connected the east and west coasts of South America. From their starting points on the Brazilian coast (where today the states of São Paulo, Paraná and Santa Catarina are located), the trails met in Paraná, continuing through the territory that today forms Paraguay to the region of Potosí, in Bolivia, which it was rich in silver.

Upon reaching Lake Titicaca (today, the border between Bolivia and Peru), the path continued to Cusco – the capital of the Inca empire – and, from there, descended to the Peruvian coast and northern Chile.

“Roughly speaking, it can be said that the ‘long’ script of Peabiru was the one that followed the apparent movement of the Sun, rising-setting”, according to Bond, in the literary series History of the Peabiru Pathpublished in 2021.

In this series, the author analyzes several plausible hypotheses about the origins of the trail and concludes that the network of paths was probably created and used by different indigenous groups over the centuries, but its main characteristic was the desire to connect the Atlantic to the Pacific.

“That is, it does not matter how many and which peoples built the sections, because what would be relevant would be that the road, at a certain moment, came to be seen as a homogeneous and specific path, which represented the ‘walk’ of the Sun in the sky on earth” , according to her.

Among the peoples Bond refers to are the Guarani, one of the largest remaining native populations in South America. They live in part of Brazil, Argentina, Paraguay and Bolivia.

The Peabiru Path is a physical and spiritual route in the Guarani culture, which leads to a mythological paradise called by them Yvy MarãEywhich lies beyond the water (the Atlantic Ocean), where the Sun rises.

This paradise (“the land without evil”, in free translation) is mentioned in the oral tradition of the Guarani, in their rituals, music, dance, symbology and in the names of places. Guarani legends even say that the network of paths is a reflection of the Milky Way on Earth.

It is also believed that the name of the trail comes from the Guarani word peabeyúwhich means “trampled grass path”, among other translations.

But for European settlers (such as the Portuguese navigator Aleixo Garcia), the spiritual path of the Guarani to paradise became a fast track to the riches of the Incas in the expeditions through the New World, which ended up causing the mass death of the populations. indigenous peoples of South America by war, hunger and, mainly, by disease.

Legends about the Eldorado and Serra da Prata brought fleets of Spanish and Portuguese ships across the Atlantic and some indigenous groups helped them penetrate the interior of the continent, through the Peabiru Way, according to Parellada.

“Knowing the main routes and trails through native populations became a strategic advantage, which amplified the looting, destruction and greed of new territories and mineral wealth,” she explains.

Over the following centuries, successive waves of explorers, Jesuit catechists, pioneers, traders, and settlers also made use of the Peabiru Path to gain access to the interior of the continent — paving, expanding, and sometimes altering the course of the path.

“The first written records of the trail date from the 16th and 17th centuries,” according to Parellada. “They include Ruy Díaz de Guzmán’s 1612 account of Garcia’s death at the hands of the Payaguás ethnic group during his return from Peru to the coast. [brasileiro].”

To continue my research on the traces of the trail, I traveled to the coast of Santa Catarina, to Enseada do Brito, in the municipality of Palhoça – a quiet bay where historians believe Garcia would have lived and from there set out on his mission to the Inca empire. . This is the starting point of another hike inspired by the Peabiru Path — a 25-kilometer path that passes by beaches, sand dunes in Serra do Tabuleiro State Park and a visit to two Guarani villages.

As I warm up for the hike, I try to imagine Garcia and his group of bearded castaways, thousands of miles from home, and their new accommodations with the Guarani after losing their ship.

As in the previous walk, the trail is just an estimate of the place where the Peabiru Path may have passed. It was defined with the research of the local entrepreneur Flávio Santos, who developed this tourism project after studying the history of the trail and the local archaeological sites.

Like many others, he sees the potential to attract year-round tourists, benefiting the local community, including the nearby Guarani villages, if everything is done right.

Parellada agrees: “A walk along the Peabiru Way, combined with educational activities, could be a bridge to a full understanding of South America’s colonial past, its biodiversity and the knowledge of indigenous peoples.”