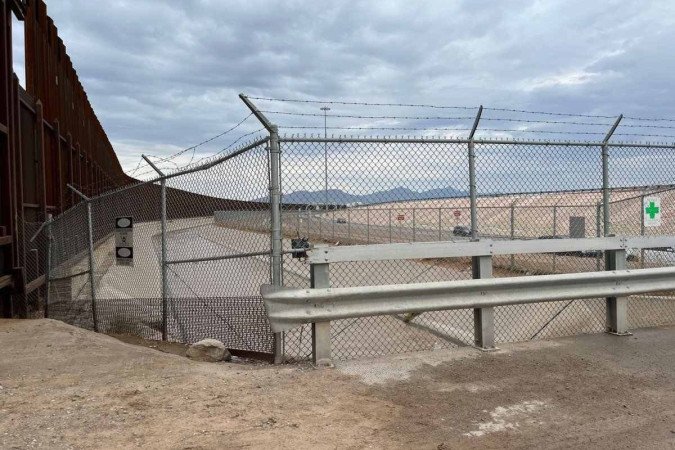 With the increase in immigrants, the US border adds thousands of dead


In El Paso, Texas, beyond the wall, there is a deep channel – (Credit: Photos: Rosana Hessel/CB)

San Antonio, Laredo and El Paso, Texas and Santa Teresa, New Mexico (USA) — Inflationary pressures and the lack of economic growth have made many Brazilians seek their luck outside Brazil and, for those who are thinking of taking the risk of crossing the Mexican border illegally, US authorities warn about the dangers of crossing. With the arrival of summer in the Northern Hemisphere, on the 21st, temperatures in the southwestern border region are very high and could cost adventurers their lives, according to officials.

According to US authorities, most of these illegals try to cross the border through the southwest of the country. In pursuit of the famous American dream, they pay coyotes, who are part of international criminal organizations. Officials say that the exploitation of these individuals is great. Cartels charge tolls from those who manage to reach the border. Access fees range from US$1,000 to US$2,000, depending on the location, and can exceed US$8,000. Some coyotes guarantee two or three entries if the immigrant is captured by US authorities and sent back to Mexico. In addition, the cartels threaten relatives and demand the carrying of drugs during the crossing from those who cannot afford the fees.

The southern US land border with Mexico is 1,900 miles long (3,200 kilometers) between the states of California, Arizona, New Mexico and Texas, but it is not entirely covered by the controversial wall of the former President Donald Trump. In El Paso, for example, the wall covers less than 70% of the 264-mile (426.5km) border. According to CBP data, 16,671 agents work at the border with vehicles, helicopters, drones and even horses.

In addition to El Paso, the also Texan Laredo has registered a strong growth in the flow in 2022. According to the authorities, 60% of immigrants who try to enter the US through that point are deported. Deportations are largely carried out under Title 42 — implemented during the Covid-19 pandemic and which provides that individuals who cross the border without legal authorization and without a basis to remain in the country (such as a valid asylum application) will be deported. promptly and will suffer the consequences of removal, including restrictions on future immigration benefits.

These two cities are surrounded by the inhospitable terrain of the Chihuahua Desert, which, at this time, has an average temperature above 40°C. On the crossing, it is not uncommon to encounter rattlesnakes, scorpions, cougars and (really) coyotes, according to police officers patrolling the border. They warn that many people manage to climb the wall with makeshift rope ladders, but when they reach the desert, they end up dying of dehydration within hours. A journey that could be done between 11 to 15 minutes running, under normal conditions, can take more than three hours — or days — due to the high temperature. Therefore, many people end up abandoned along the way. And even when they reach a point where it is possible to ask for help, it may not arrive in a timely manner.

“Sometimes, even with helicopters, depending on where the person is, the rescue team can take from 30 minutes to three hours. And in many cases, we arrive too late”, explains Efren Gonzales, director of the Operations Department. CBP Air and Maritime, responsible for rescues and border security in El Paso. The division’s helicopter fleet, according to the official, consists of three Black Hawks equipped with long-range night vision cameras and a four-hour flight range. There are also eight more smaller-capacity helicopters, the A-Star.

According to Gloria Chavez, director of the CBP operations center in El Paso, the flow of immigrants trying to enter the US illegally is expected to continue growing in the coming months, because summer is the time when there are more attempts. In El Paso alone, the number of illegal immigrants dropped from 182,000 to 54,000 between fiscal years 2019 and 2020. And this fiscal year, there were 177,000 encounters of illegal immigrants in the region through May. In the whole of last year, there were 193 thousand. “In 2021, the number of illegal immigrants has gone up too much, and now, in fiscal year 2022, we are going to reach more than 200,000 people in the El Paso sector, because the flow is increasing and we find 700 to 1,000 illegal people a day. “, he informed.

The official says that, among the 69 countries of origin of these illegals, those with the highest rates of immigrants trying to enter the US through the El Paso region are Mexico, Guatemala, Haiti, Cuba, Turkey, Nicaragua, Honduras, Brazil, El Salvador, Ecuador, Colombia, Chile, Peru, Russia, Venezuela and Bolivia. According to her, there were 361 rescues this fiscal year and, in that same period, 37 deaths were recorded in the region, practically the same number in all fiscal year 2021.

In Laredo, a city 250km from Santo Antonio, on the banks of the Rio Grande, from October 2021 to May this year, 51 illegal immigrants died on the crossing and there are still 13 people who have not been identified. That’s roughly the same number of deaths recorded in fiscal 2021, which ended last September, according to the deputy head of CBP’s Laredo division, Greg Burnwell.

Officials highlight the dangers involved in crossing the Rio Grande and then through the desert in the region of Laredo and El Paso. “People believe that the human body survives three days without water, but only under normal conditions. In the desert, that doesn’t happen and, unfortunately, when rescuers arrive, there are cases where they can’t find the person alive”, emphasizes Brunwell. According to him, there are very few Brazilians trying to enter the United States illegally through the Laredo border.

When foreign immigrants obtain a temporary permit to stay in the US, they are referred by the authorities to reception centers, such as the one managed by Joe Barron, in Laredo, which receives about 7,000 people referred by the border patrol monthly, in large part. majority, Venezuelans and Haitians.

In the old Methodist school installed in 1845, immigrants are received and sent to other cities. One of the people is the Venezuelan José Medina, 29, who left his family in his country of origin and walked with a group of friends for two months, until he arrived in the United States to apply for asylum. He got temporary permission until August. At the reception center, he asked for help getting to the capital, Washington, but he had no idea how far Laredo was. “I want to work there and help my family,” he says.