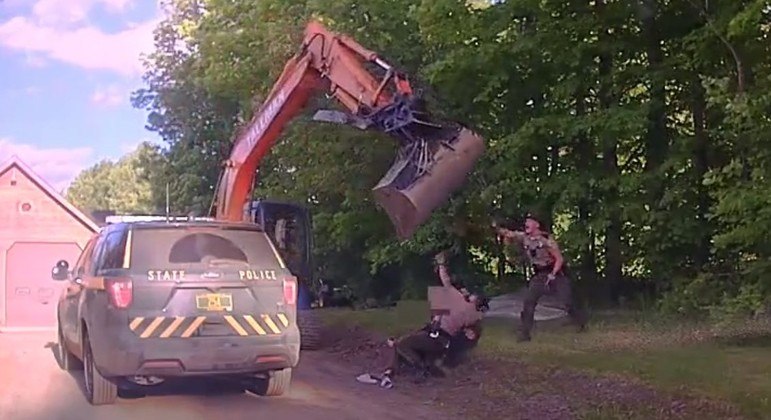 Two police officers were attacked by an excavator piloted by an angry father, who was trying to prevent his son’s arrest. The video with the act was shared by the police of Vermont, in the United States. The images show that the mother also tried to help in the resistance.

The authorities’ target was Brandon Tallman, accused of theft and serious assault. But his parents were unwilling to see their son behind bars.

Last week, two troopers found themselves in an unexpected and dangerous situation when they went to a home in Hardwick to arrest a suspect in an assault and burglary case. Thankfully, this incident ended with the subjects in custody, and no injuries to anyone involved. pic.twitter.com/TqnGvm71Px

While the mother clung to her son to delay the police action, the father went further and climbed onto the excavator.

With the arm of the vehicle, he threatened to hit the police officers and the vehicle used by them. Not even with a gun pointed at him did Wayne back away from the action.

On Twitter, Vermont State Police said no one was injured in the incident. Wayne was eventually arrested for assault and resisting arrest.


READ BELOW: Police called to deal with ‘medieval knight’ in park

The president of Peru, Pedro Castillo, announced this Wednesday (7) the dissolution of …