Israel facilitates access to abortion in the country | World

Israel changed the rules regarding abortion in the country to facilitate access to the procedure this Monday (27).

The new law, approved by a committee of lawmakers, gives women access to the morning-after pill through the country’s public health system.

In addition, the country ended the mandatory step before performing the procedure: the woman had to present herself to a committee.

These committees were criticized in the country. Most requests to carry out the process were approved, but the women complained of being forced to undergo a procedure considered bureaucratic, humiliating and intrusive.

Eventually, they have to wait a long time.

The abortion procedure is offered in Israel and is less controversial than in other developed countries such as the United States.

Now the process will be done online. There will be the option of meeting with a social worker.

Health Minister Nitzan Horowitz said the law reform will make the process simpler, more respectful and advanced. He says the new rules uphold a woman’s right to decide what to do with her own body, something he has described as a basic human right.

The change in Israel was passed a week after a significant change in the US. 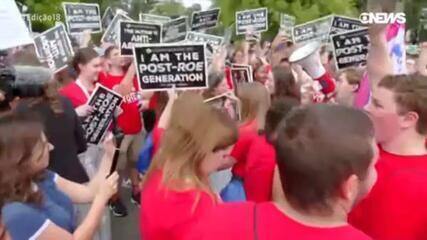 The end of the legal right to abortion in the USA

Last week, the US Supreme Court ended the constitutional understanding that women can choose to have an abortion.

For nearly 50 years, the rule that held sway in the US was a decision made in a lawsuit known as Roe v. Wade.

This has changed with the recent Supreme Court decision.

Horowitz, Israel’s health minister, commented on the change in the US. For him, the US has set the clock back.

“A woman should have complete right over her body, the US Supreme Court decision denies a woman’s right to make choices about her own body and is a sad process of repression of women, placing the country as the leader of the free and liberal world. one hundred years ago,” he said.

the legacy of Christopher Columbus suffered two blows in Denver, in 2020. The first was …