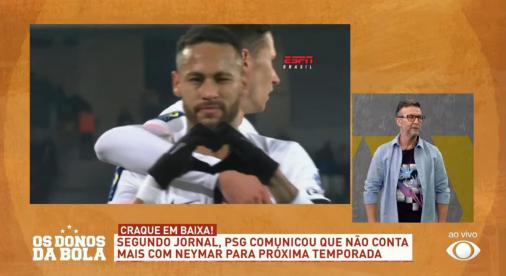 Neto questions Mbappé’s behavior at PSG: ‘Who are you next to Neymar?’

After all the repercussions of the Possible departure of Neymar from PSG, the presenter of ‘Donos da Bola’ Craque Neto defended the Brazilian during this Tuesday’s program (28). The former player made several criticisms of French Kylian Mbappé, appointed as the new leader of the Parisian club’s sports project.

Neto commented on recent episodes involving PSG’s number 7 and came out in defense of Neymar.

– Who do you think Mbappé is, to talk about South American football? Do you know who was Ardiles, Kempes, Carlos Alberto Torres, Rivelino, Gerson? You’re a little Frenchman who doesn’t even come close to (Napoleon) Bonaparte – Neto shot. The presenter attacked the player’s posture and compared him with the Brazilian:

– You play nice in your contract, earn a fortune, give up going to Real Madrid, which is your right, and now say you don’t want him (Neymar), you’re a slut. Who are you next to Neymar? When will you pass Neymar? You are world champion, Neymar is not, because he didn’t want to – he added.

+ Neymar receives advice from Neto: ‘Send the PSG president to the dick’

The shirt number 10 of the Brazilian team was warned by Paris Saint-Germain that he is not in the French club’s plans, according to “El País”. Nasser Al-Khelaifi’s team has been undergoing a makeover since Mbappé’s renewal and seeks to impose more discipline on the squad.

Mbappé has already complained about the Brazilian’s indiscipline in a systematic way in training and his recoveries after each match of the Ligue 1 team.

PSG held a meeting with Neymar’s father in the face of a possible departure from the athlete. Nasser Al-Khelaifi’s club is willing to pay the player’s salary in case of loan to another team.

Previous Why does Zendaya feel stupid being an actress? Estrela explains to Vogue Italia
Next Italian company uses Spyware to hack into cell phones