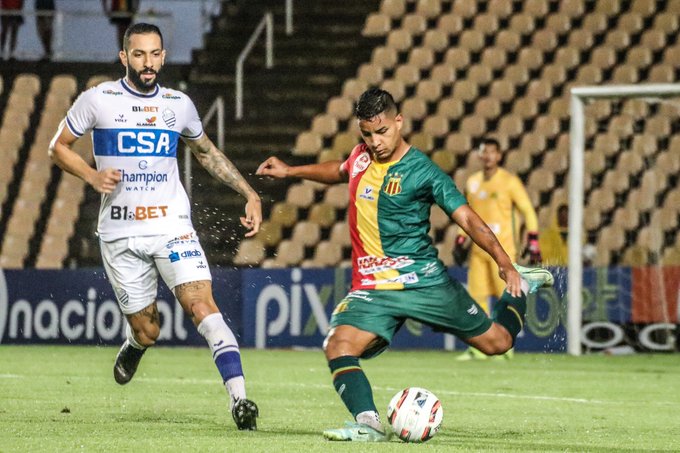 São Luis, MA, 27 (AFI) – The Sampaio Correa remains undefeated at Estádio Castelão, in São Luís, this Serie B of the Brazilian Championship. On Monday night (27), in one of the games that opened the 15th round, the team from Maranhão lived up to the home factor by receiving and winning the CSA, by the score of 2 to 0, in a direct duel against the relegation zone. Gabriel Poveda and Ygor Catatau, in the first minutes of the second half, scored the goals of the match.

With the result, Sampaio Corrêa was rehabilitated after two games without a win and now appears in ninth place with 19 points, moving away from the sticking and approaching the fight for access. The CSA, on the other hand, doesn’t know what it’s like to win for six rounds and appears in 15th position, being able to go to Z4 until the end of the round, depending on the other results. Náutico, the first team in the zone, has 14.

Playing at Castelão Stadium, Sampaio Corrêa started the match doing justice to the home factor, with more possession of the ball and dominating the offensive plays in the first minutes. After some good attempts, Ygor Catatau hit the post in the 33rd minute. The forward took advantage of the opponent’s nap, was free in the area and kicked with his left foot, but the ball pinched the post.

CSA also responded with a ball on the post. In the 39th minute, Rodrigo Rodrigues cleared the mark and hit low, from inside the area, arriving with a lot of danger. In the final minutes, the duel continued busy, but the first half ended with a goalless draw.

On the return of the break, Sampaio Corrêa was overwhelming and scored two goals in the first ten minutes, practically declaring victory. The first one came out in the first minute when Rafael Vila received in the area and only supported for Gabriel Poveda, free of marking, to send the ball to the back of the net, with a totally open goal.

At ten, it was Ygor Catatau’s turn to leave his mark. He took advantage of a shot by Gabriel Poveda, to deflect in the middle of the way and send the ball to the goal. From there, CSA launched itself into the attack to at least seek the goal of honor, but without success. On the other hand, Sampaio Corrêa only controlled the game and even won 2-0.

The two teams return to the field next weekend for the dispute of the 16th round of the Campeonato Brasileiro Série B. On Friday (01), Sampaio Corrêa visits Chapecoense, at Arena Condá, at 19h. On Saturday (02), CSA faces Londrina, at Estádio do Café, at 11 am.

Previous Selena Gomez comments on US Supreme Court ruling on abortion
Next Wagner is back, but Cruzeiro has a last-minute absence to face Sport