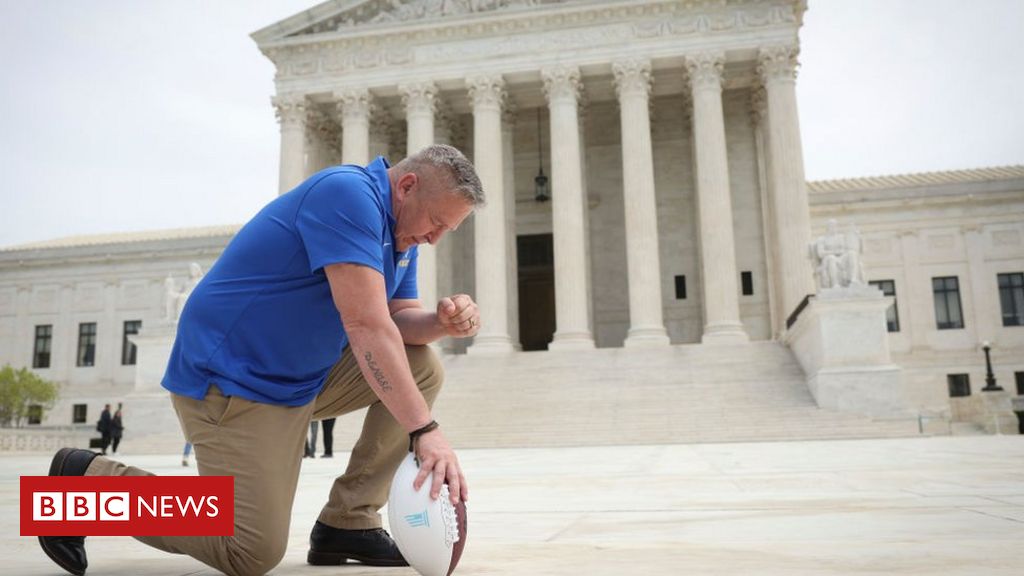 The US Supreme Court ruled that a public school erred in punishing its football coach for saying prayers after his team’s games.

According to the decision, the acts of Joseph Kennedy are protected by the constitutional right to religious expression.

The school argued that prayers led by the coach and civil servant, who knelt in the middle of the field, could force students of different faiths or atheists to participate in a Christian religious act.

The case was considered an important test of the separation of religion and state in the US.

By 6 to 3, the Conservative majority court ruled that the school violated Kennedy’s right to “personal religious expression, based on a mistaken view that [a Constituição] has a duty to suppress religious expressions even if it allows secular speech”.

In the text justifying the votes supporting the football coach’s actions, Judge Neil Gorsuch stated that “the Constitution neither requires nor tolerates this type of discrimination.”

The Court’s Recent Historyread more below) was to avoid the involvement of religious practices in activities involving the State.

Judge Sonia Sotomayor, who voted against it, wrote that the decision “is particularly misguided because it increases the religious rights of a school representative, who voluntarily accepted public employment and the limits of such an office.”

The 2006 film follows a coach at a small religious academy who led his team to a state football championship after preaching Christian values ​​to his players, including holding prayers.

At the time, Kennedy was considering becoming a football coach at a high school in Bremerton – a city near Seattle, Washington – despite having little experience in the sport.

His wife worked for schools in the area, and he was offered the offer based on his experience as a US Marine, where he played pranks from time to time.

He took the job and, for the next seven years, prayed on the field after games – sometimes alone, sometimes with players – with seemingly little attention or controversy.

That changed after a game in September 2015, when an opposing coach notified the Bremerton school principal about the prayers.

The school informed Kennedy that the acts could be interpreted as the institution’s endorsement of religion, which conflicts with a long history of cases reviewed by the US Supreme Court about limiting religious activities within public education.

Kennedy refused to heed the school’s orders and ended up gaining media attention, with crowds of spectators gathered on the field around the coach. The school decided to put him on leave.

At the end of his term, instead of trying to renew his one-year contract with the school, he sued the school district for infringing on his constitutional right to freedom of religion and toured the country to speak on his case.

And so began a six-year battle in the courts involving various aspects of the First Amendment to the US Constitution – which protects freedom of speech and religious exercise, but also prohibits state imposition of religion.

In the Supreme Court, Kennedy’s attorney argued that he was simply an ordinary citizen who wished he could express his personal religious beliefs after completing his official coaching duties.

The Bremerton school district, the lawyer said, punished the coach for exercising his rights, violating its constitutional protections.

The school’s legal representative countered that Kennedy’s actions were much more than private prayers – they were public group displays held on school property, which could have a coercive effect on students and athletes with different religious beliefs.

The Supreme Court’s record was to support limitations

Drawing boundaries like this is recurrent for Supreme Court justices. Complicated issues involving constitutional rights and protections are considered.

In 2000, a 6-3 majority of the Supreme Court ruled that student-led prayer before a football game, broadcast over the school’s sound system, was an unconstitutional government endorsement of religion.

A small majority of 5 to 4 in 1992 held that a religiously led prayer at a public school graduation was inherently coercive and therefore unconstitutional.

One of the most important cases on this topic is “Lemon v Kurtzman”, from 1971, which established a three-part test of the constitutionality of a law.

First, laws must have a “secular legislative purpose.” Second, legislation cannot support or inhibit religion. And finally, the government cannot be “overly involved in religion.”

The increasingly conservative court has abandoned the “Lemon test” in favor of laws that allow or even support religious expression – and the court’s decision in this case makes that move explicit.

Judge Sotomayor said the ruling takes a “dangerous path in forcing states to engage with religion, putting our rights at stake.”

Conservative advocates of religious freedom have been calling for just such a move.

Lori Windham, senior adviser to the Becket Fund for Religious Liberty, said “it is a right to bring the deepest and most important truths into public life.”