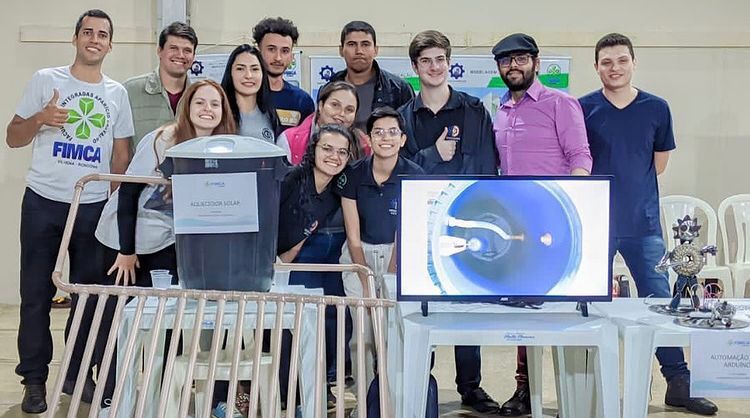 Last Friday, the 24th, professor Maurício Veiga da Silva from Faculdade Integrada Aparício Carvalho – FIMCA, together with academic Elizeu Xavier from the Electrical and Mechanical Engineering course visited the website Rondônia Extra to talk about an excellent project carried out in Vilhena.

The project is a homemade “solar heater”, developed by Maurício and 15 academics of the course.

The professor explains that the project was developed little by little, so that nothing could go wrong, until the heater using only solar energy came out of the paper.

“Among home appliances, the one that most generates expense and consumes energy is the electric shower, so the idea was to make the heater with PVC pipes, a low-cost, homemade material that is used to heat the shower water”, explains the teacher.

Maurício explains that a reservoir is placed on the roof of the house, receiving water from the street or the water tank, descending by gravity. The sun starts to heat up, so the water comes out hot, completely without a pump and without expending energy.

With a reservoir, it is possible to distribute to other bathrooms, and it is carried out in a way that the person can control the temperature of the hot water. The “solar heater” is cost-effective at around R$700.00 only.

“College is the realization of a dream, I was born and raised here in Vilhena, I am 32 years old, and as soon as the course was announced I entered and I am fulfilling a dream. The best college I have been surprised, mainly through this project and having a lot of good experience. Leaving the classroom and putting everything we have learned into practice is exceptional”, concludes Elizeu Xavier, representative of the other students.

The academic also emphasizes that at first he did not believe that the project could work, but as the idea progressed, they could see how incredible the experience would be. Other people also trusted the services, so much so that the project was installed for the first time in a voluntary residence where there was no hot water, and today, the family makes use of it with great happiness.

“The project is very interesting, we adapt and rely on physics and science. In addition to this, we have several plans in mind to be developed, we always want that, extension projects that we can take to the community and that don’t just stay behind four walls inside the classroom. There are 15 students who were very dedicated, I launched the idea and they were the main protagonists of this proposal, they believed in my words, I congratulate them all. And being at the university as a professor is wonderful, they give us freedom to perform my service in the best possible way, we are free to put our projects into action”, concludes Mauricio.

Lula lamented the tragedy caused by a criminal in schools (photo: AHMAD GHARABLI/AFP) An attack …