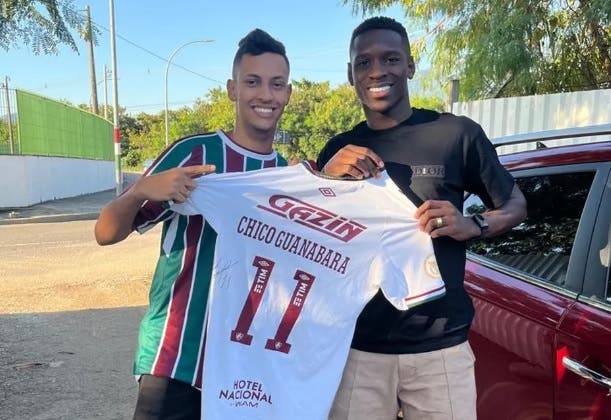 Fan who took Luiz Henrique’s last shirt says: “I had to go out escorted”

Sold to Real Betis, from Spain, Luiz Henrique made his last game for Fluminense last Sunday, in the 1-0 victory over Botafogo, in Engenhão. In the end, he said goodbye to the fans who attended the stadium and threw his shirt to Setor Sul.

The lucky person who managed to catch it was Yan Queiroz, 27, a resident of Campo Grande. In an interview with the GE portal, the fan-partner told about the moment he managed to get the shirt and that he had to leave the stadium escorted by security.

– Man, what a fight it was, I got it after a lot of “fighting” (laughs). There were about five people pulling, then people came wanting to take the shirt by force, I had to go out escorted by security. But it worked, thank God. I’m a member, I go to every game, it wasn’t a random fan who took it, no. That’s what always goes – said Yan, guaranteeing that the shirt survived without any rips: “Nothing, it’s perfect”.

On Tuesday, Yan even managed to get an autograph on the shirt before framing it. She negotiated a free afternoon at work, at a transport company in Campo Grande, and took the shirt to the door of CT Carlos Castilho to have the signature.

– So young, huh? I always wanted to stay longer. It made me sad, but we also understand, see the player’s personal side, his dream was to go to Europe. May it be the best for Fluminense and for him too. I will always be rooting for him, and that one day he will come back – commented Yan.

Previous Why is the iPhone 13 Pro Max more expensive?
Next Galaxy S22 Plus with Snapdragon 8 Gen1 on offer with free Watch4 – All in Technology