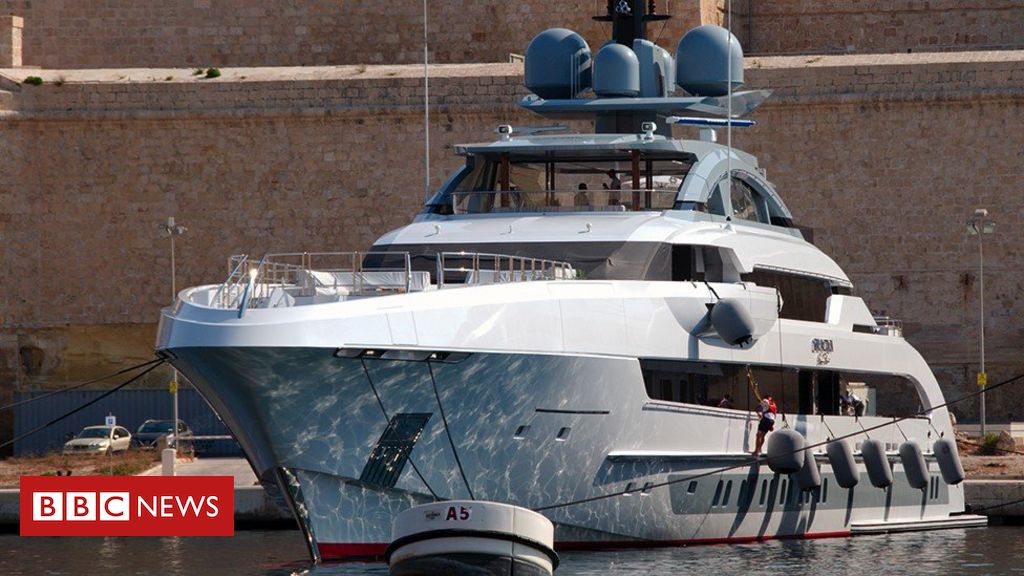 Russian oligarchs were hit by international sanctions after the start of the war in Ukraine. Since then, his yachts have “mysteriously” disappeared from tracking systems.

This disappearance violates the UN Convention on Safety of Life at Sea, which says that large vessels must have their Automatic Identification System (AIS) turned on unless there is a risk to the vessel and crew — as in a case from pirate attacks, for example.

The whereabouts of some of the superyachts remain unknown, but the BBC used publicly available satellite imagery and social media to track four of them.

“It’s unusual to have no signals for so long, when historically these yachts have always given signals,” says an analyst at marine data provider VesselsValue.

Three of the yachts transmitted position data every day this year, including in port, until they came to a sudden stop. Two yachts sailed over a thousand km without being tracked by the AIS.

In March and April, when the US, EU and UK began seizing multi-million dollar superyachts tied to Russian tycoons (they rarely appear as the registered owners of these vessels), those ships appeared to be safe.

Know where they are now.

The 70-meter superyacht accommodates 12 guests in six luxurious suites and features a six-meter glass-bottomed pool, a waterfall and a helipad.

The US$80 million (R$420 million) yacht registered its last position on March 2, when it was off the coast of Montenegro. His journey had begun on February 26—two days after the invasion of Ukraine—in Barcelona, ​​northern Spain.

At this point, neither the superyacht nor Alekperov, founder of Russia’s largest oil company, Lukoil, was under international sanctions. But Spanish authorities later seized several Russian superyachts as the list of oligarchs sanctioned for connections to President Vladimir Putin grew.

Alekperov was sanctioned by the UK and Australia in April and stepped down as chairman of Lukoil soon after. Canada has also included him on its list of sanctioned persons.

From Montenegro, Galactica Super Nova sailed over 1,500 km to the southeast without transmitting an AIS signal. Instagram posts show he is now at Port Azure marina in Gocek, Turkey, having arrived there on May 9.

As Turkey is not cooperating with international sanctions against Moscow, the yacht appears to be out of danger of seizure.

“In general, Turkey has more yachts than before because of the sanctions against Russian oligarchs,” a source close to Turkey’s luxury yacht market told the BBC.

“Both of the yachts [ex-proprietário do time de futebol Chelsea, Roman] Abramovich have been here a long time. And they will probably stay longer since they have nowhere else to go.”

Quantum Blue is even larger than Galactica Super Nova and has traveled a greater distance — more than 1,700 km — since its AIS system stopped sending signals.

Although Galitsky was not subject to sanctions, the ship was temporarily barred from leaving the port of Monaco in March. When she was released, she sailed across the Mediterranean and entered the Suez Canal on 16 March.

As it passed through the Arabian Peninsula, its tracking system stopped sending signals on March 22, not far from the Yemen-Oman border.

Its current location was revealed by a contributor to the Gibraltar Yachting Facebook page.

The source, who does not want to be named because he works in the maritime industry, says he was on vacation in Dubai and went to Port Rashid to photograph a superyacht owned by Sheikh Mohammed bin Rashid Al-Maktoum, the prime minister of the United Arab Emirates.

The source says she was prevented from approaching the pier by security.

“He told me, ‘No pictures, no pictures.’ I couldn’t even get close.”

But heading to the upper deck of the nearby cruise ship QE2 — now a floating hotel and tourist attraction — he was surprised to see not only the Sheikh’s ship, but also the Quantum Blue and another Russian superyacht, Madame Gu, attached to the ship. metals magnate Andrey Skoch, also targeted by sanctions.

Asked by the BBC if he thought Quantum Blue’s AIS tracking system was deliberately shut down, the source said: “Definitely.”

“Almost all these Russian yachts have the AIS off. They turn the AIS off just before entering the harbor basically to hide.”

Prior to that, Quantum Blue was transmitting the AIS signal even while it was stationary.

Publicly available satellite photographs taken by the European Space Agency show that Quantum Blue arrived in Dubai between 14 and 29 March and remains there.

Even if Galitsky is subject to sanctions in the future, Dubai does not have a property seizure agreement with the US, UK or EU.

The oligarch was mentioned as the owner of the superyacht by RT, Forbes, Financial Times and other publications.

The $65 million, 73-meter superyacht has traveled farther than any of the Russian ships that disappeared from radar.

Clio left Galle, Sri Lanka, on 10 February for the Maldives. From there, she sailed northwest towards the Gulf before returning to the archipelago.

After that, it moved to the Red Sea, passed through the Suez Canal and headed north. Its AIS system stopped transmission on April 18, after passing over the Bosphorus into the Black Sea.

It then traveled about 900 km to the Russian port of Adler. Satellite images show the vessel arrived on April 22 and is still there. She also appeared in posts on the Telegram app.

A spokesman for Deripaska, an industrialist with an estimated fortune of US$3.5 billion, said he did not own Clio. The International Maritime Organization lists a company called Waleforce as the owner and a British yacht management company as a point of contact.

That company told the BBC it had no connection to the Clio at the time it stopped transmitting its AIS signal.

Deripaska has been sanctioned by the US, UK, EU and Australia for his alleged ties to President Putin.

His spokesman told the BBC that the sanctions were “deeply misguided and supported by baseless and absurd accusations. Deripaska has never been involved in politics and does not benefit from this or any other military conflict”.

The 82-meter Graceful left Hamburg, where it was being repaired, on February 7 and sailed to the Russian territory of Kaliningrad.

Under the UN convention on the Safety of Life at Sea, ships can turn off their AIS system while on quay, but Graceful’s signals disappeared during its final approach to Kaliningrad.

Photos on the Russian social media site Odnoklassniki and the Telegram app initially showed Graceful on the Pregolia River.

After that, the vessel moved to a dry dock belonging to the Yantar shipyard. Satellite images from the European Space Agency show the superyacht made this move on March 16 and is still there now.

A spokesman for President Putin told the BBC: “We don’t know anything about the yacht mentioned. We can emphatically say that Putin has no connection with this or any other yacht.”

However, Graceful was linked to the Russian leader by the US Treasury in a statement that places it on a list of sanctioned assets. According to the US government, Putin “made numerous trips” on the superyacht.

Graceful’s registered owner with the International Maritime Organization is a company called JSC Argument, which, according to an investigation by the BBC’s Russian service, is linked to a sprawling rural estate on the Black Sea coast known as “Putin’s Palace”.

The BBC reached out to Vagit Alekperov and Sergey Galitsky for comment, but received no response.