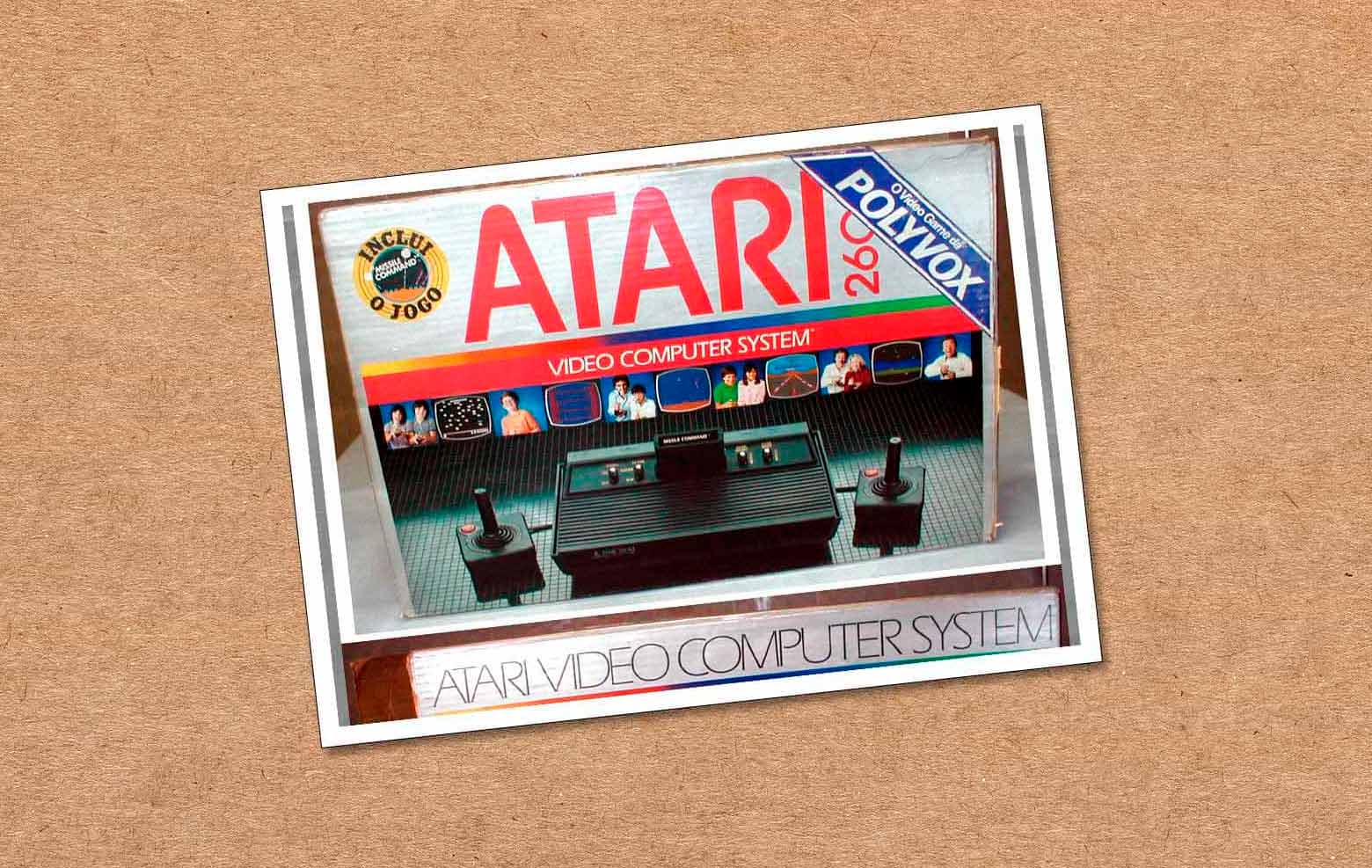 The jeitinho, the clones and the arrival of Atari in Brazil

“The #1 enemy of the Brazilian family”. This phrase appeared in one of the advertising pieces that publicized the official arrival of the Atari 2600 to Brazil, in 1983. The impact phrase had a certain connection with the moment that the Brazilian market was facing at the time.

We were still under the famous and controversial era of market reserve, which restricted access to imported electronics. This measure, which, in theory, tried to sell itself as something good for the country, ended up creating an enemy of consumption. The restriction of access to official products, higher prices and the technological gap.

THE atari, who turned 50 this Monday (27), officially arrived in Brazil in the midst of this chapter of national history, and surrounded by its clones made in Tupiniquin lands. It was official piracy, which fostered a taste for video games in Brazilians at the time.

The game market we have today is largely due to piracy and also to the controversial “Brazilian way.” Let’s remember some remarkable moments of this time in this article.

It is impossible to talk about the game market in Brazil and its developments without going through the market reserve, a state movement, supported by national companies, which made it difficult for computers, video games and other foreign paraphernalia to arrive in the country. The objective was to strengthen national industry and reduce dependence on technology from abroad.

The “consecration” of this protectionism came with the National Information Technology Policy – PNIwhich acted relentlessly between 1984 and 1992, based on the Law No. 7232. In this period, the importation of video games was prohibited. Who knows, even national companies wouldn’t bend it a little way, right?

With PNI, SEI – Special Secretariat for Informatics (which replaced CAPRE) had the autonomy to act as the “guardian” of national companies related to the IT market. This autonomy allowed SEI to control imports of IT goods and services.

As the objective was to strengthen the domestic market, the government turned a blind eye to piracy. The national companies ended up gaining the autonomy to literally create alternative versions of the original video games and cartridges, changing the visual part, the communication, and even creating games, altered from an official version. 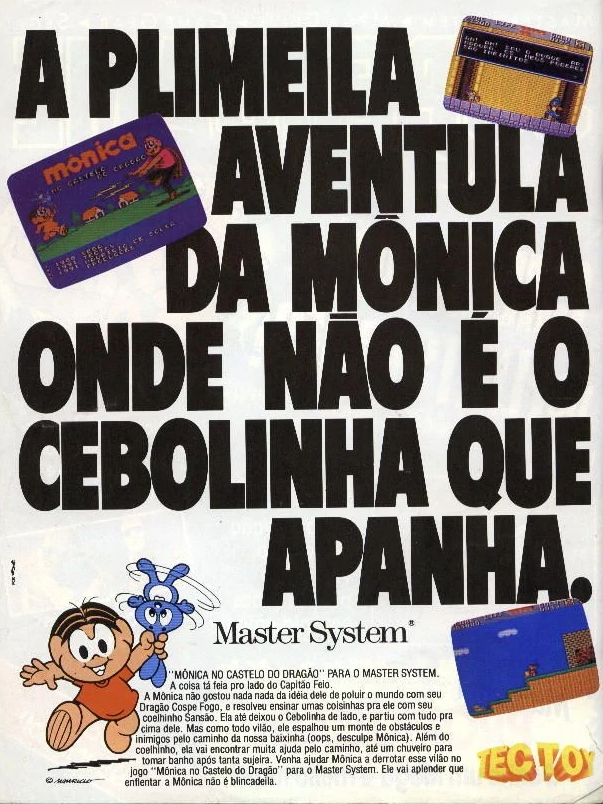 The Atari 2600 and the NES, the “nintendinho”, were at the forefront among the products that Brazilian companies copied the most. It had everything at that time, even Dismac, renowned for its calculators, created a clone of the Atari 2600, named here as VJ-9000.

Executives from national companies brought in some Atari 2600 units from abroad and tried, via reserve engineering, to develop an alternative to the original.

Before the boiling of national clones, Brazil already had a good amount of video games in circulation, mostly Atari, which arrived in the country in the same way that corporate executives had access, through imports. Evidently these imports were for the lucky few.

Traveling abroad at that time was very expensive. Apart from the fact that it was still necessary to resort to the process of converting the image system to play on color TVs, televisions in Brazil used the PAL-M system.

But what really caught on were the clones. The first Brazilian clone of the Atari 2600 was the CX-2600released in April 1980 by a company called Atari Electronics Ltd. founded by jeweler Joseph Maghrabi. The suggested price was Cr$ 29,890.00, equivalent to R$ 7,737.87, in today’s values.

Other famous Atari 2600 clones were as follows:

Top Gamereleased in 1981 by Bit Eletrônica.

There was even a clone that came inside a suitcase, the Dactar Suitcasealso known as Date 007.

Another very curious model was the Onyx Junior, from Microdigital, known as the Atari 2600 clone with a pause button for the game.

Julio Albertoni, who was CEO of Sayfi, responsible for Dactatvi, in an interview for an edition of Video News magazine at the time, was very sincere in saying what clones were:

“We dismantled the official Atari and analyzed how it works. Some components we have made here, the chips will be made by an American company. Our policy is the same as that of the Japanese: nothing is created, everything is copied. If it worked for them, why wouldn’t it work for us?”

Another curious story, this time with Nintendo clones, involved Gradiente. As reported by Marcos Santosat the time an engineer at Gradiente, when Nintendo became aware of the existence of the Phantom System, clone of the NES, the famous Nintendo, the company’s representatives came to Brazil to talk to Gradiente and propose an agreement.

If Phantom were discontinued, an agreement could be closed for Gradiente to officially represent Nintendo in Brazil. Brazil, as Marcos points out, was the first country to manufacture Nintendo video games outside Japan. 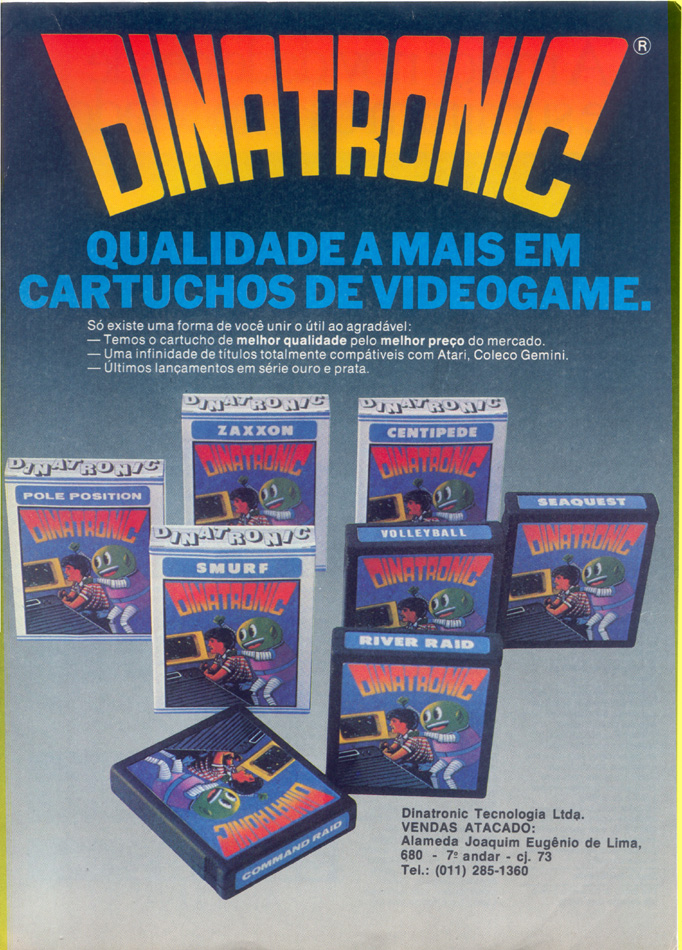 This entertainment is not only supported by video games, something fundamental is needed: games. And Brazil also knew how to deal very well with cartridge cloning. The first companies that cloned cartridges were Canal 3 Indústria & Comércio and Dynacom. 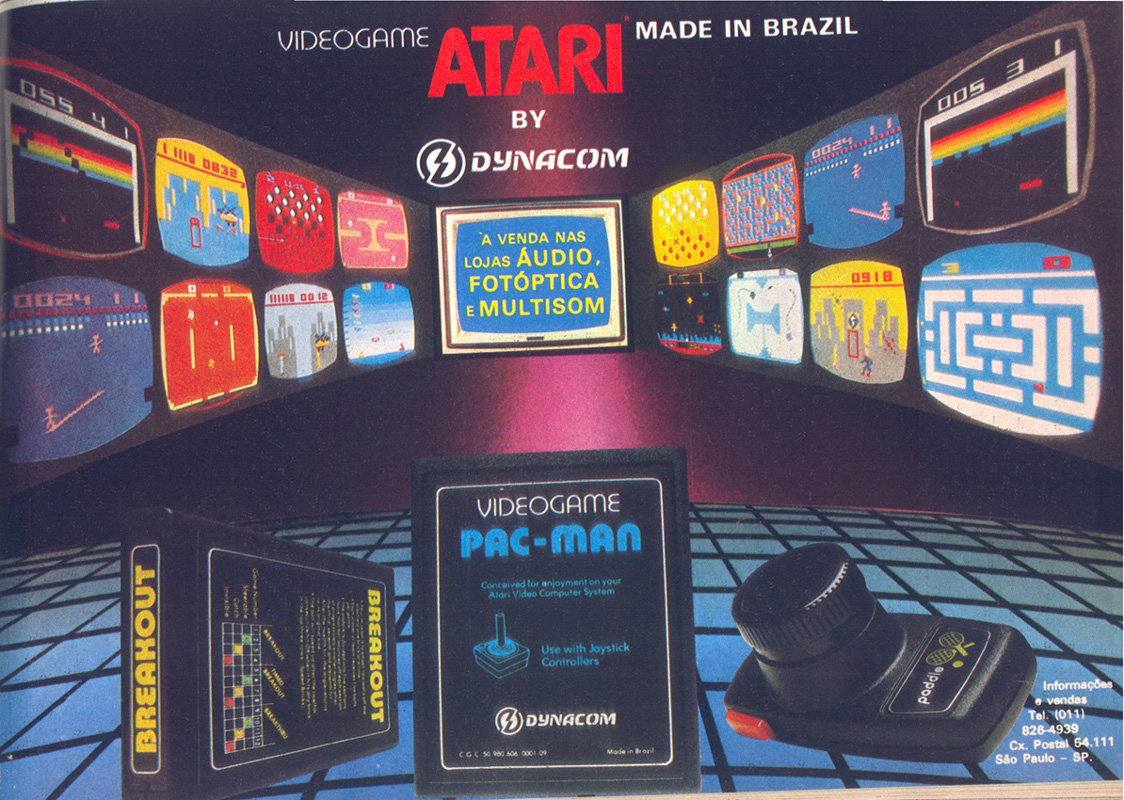 At the height of cloning, 1984, more than 20 companies fought in the competitive national cartridge market. Names like Supergame, CCE, Imagic, Genus and Zirok were in the middle. 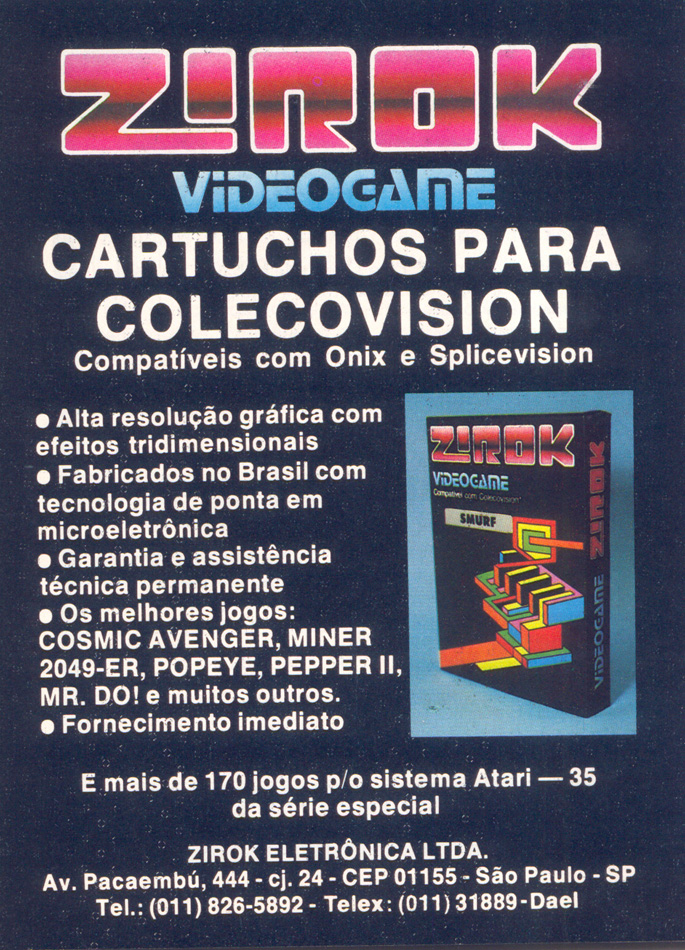 The market was so competitive that some tried to capture the consumer’s attention with customized solutions. Tron, for example, sold cartridges that had a kind of handle, facilitating removal. Solution that not even the original Atari cartridge had.

The ingenuity also involved modifying information in the software so that the name of these national companies would appear in the game, and even completely removing the legitimate developers and publishers.

The localization of the games to Portuguese was also a show in itself. The Atari 2600’s FreeWay received the name BR-101 here.

The strategy of cutting costs at all points strengthened the massification of games, as the price of cloned cartridges were more affordable than the originals.

Some of these cartridges are true rarities, like the series in colored boxes, produced by CCE. 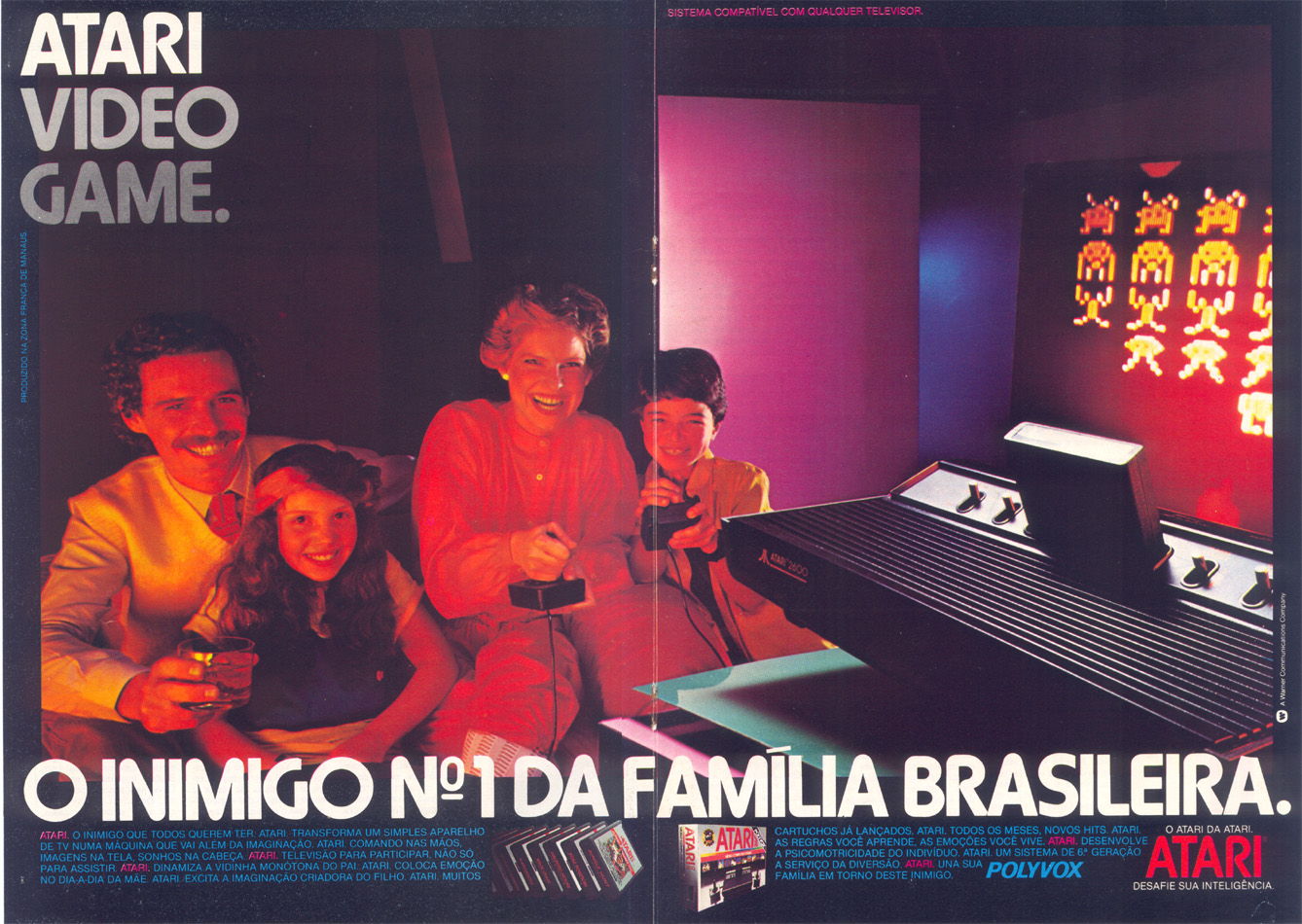 And of course, the moment leading up to this milestone did not fail to carry interesting stories.

At the time, Atari already belonged to Warner, and the negotiation process began for Polyvox, acquired by Gradiente in 1979, to be the official representative of Atari in Brazil.

6 Game Based Movies That Were a Success

What are video game emulators and how do they work?

Are you reminded of Joseph Magharabi? The one who founded Atari Eletrônica Ltda and launched the first Atari clone in Brazil? Well, the official Atari had to negotiate with him so the Atari name could be used. It would not be possible for two companies with the same name. An agreement has been established. Magharabi was allowed to continue manufacturing Atari 2600 compatible cartridges.

The next step would be to decide how the clone competition would take place. It would take a lot of communication and marketing work to sell the legitimate Atari idea.

Anchored on a budget of approximately $7 million, Atari went all out with the advertising, anchored in the slogan: “The Atari of Atari”.

Polyvox was also responsible for launching the official Atari cartridges in Brazil, with all possible care, including manuals and iconic covers. 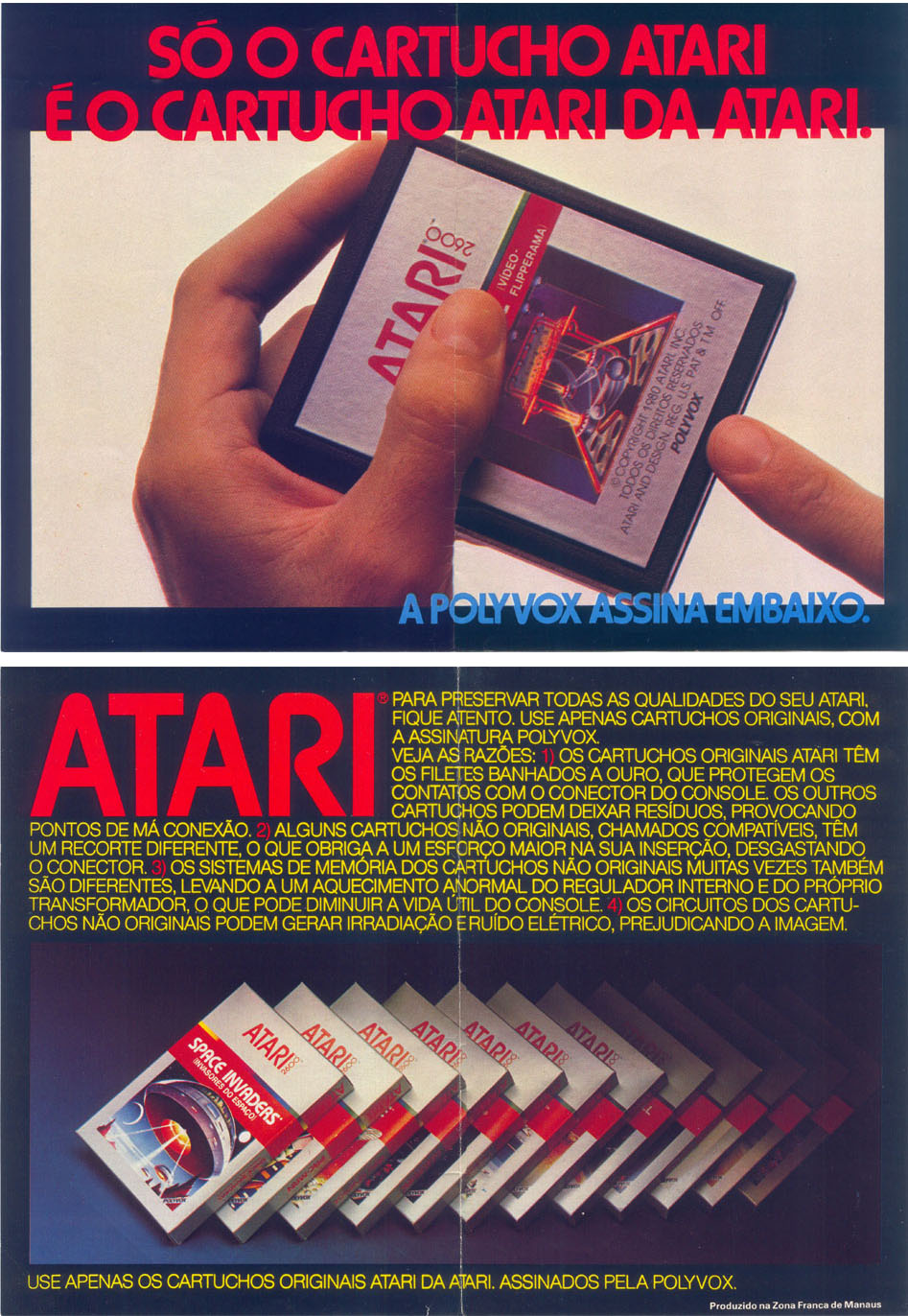 Polyvox’s Atari 2600 came with one cartridge, the Missile Command.

Gradiente/Polyvox had plans to launch the Atari 7800 in Brazil, but at the last minute, the company changed plans, and bet on the NES clone, the Phantom Sytem.

Even so, the essence of Atari was kept here, as the design applied to the Phantom System was kept to what would be used for the Atari 7800. We are left with an Atari-looking NES clone. Brazil thing.

Previous Journalist detonates team chosen by Dorival Júnior for the duel against Tolima: “It will not work”
Next Container falls, spills toxic gas and leaves 13 people dead and 250 injured in Jordan Last Thursday (24), the Google released an emergency update for the browser Google Chrome🇧🇷 A …