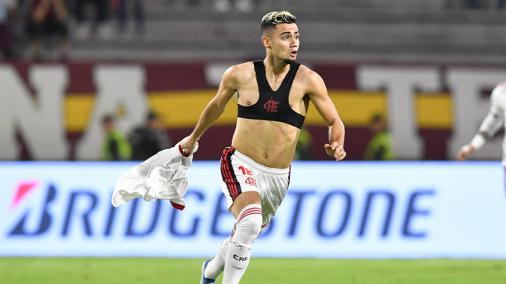 It did not serve as redemption for the error in the decision of the Liberators 2021, but Andreas Pereira ended his time at Flamengo with a positive performance. After all, he scored the winning goal over Tolima, this Wednesday, in Colombia, by 1-0, in the round of 16 of the Liberators. Thus, shirt 18 says goodbye, forwarding the team’s spot to the quarterfinals of the Cup.

With the result in Ibagué, Flamengo plays for a draw in Rio de Janeiro. Tolima, on the other hand, need a win by two goals to advance to the quarterfinals, and a Colombian victory by minimal difference will take the decision to penalties.

Now, Flamengo turns its attention to the Brazilian: Saturday, at Vila Belmiro, they face Santos. The return match Liberators against Tolima will be on Wednesday, at 21:30, at Maracanã.

ANDREAS SAYS GOODBYE WITH A GOAL!

In his last game as a Flamengo player, Andreas Pereira was responsible for opening the scoring in Ibagué. And it was soon with a great goal: kick in the angle, from outside the area, leaving the goalkeeper Dominguez without reaction. In the celebration, the midfielder vented, took off his shirt and ran towards the reserves, being greatly celebrated by his teammates.

FLAMENGO GOES TO BREAK IN PROFIT

Before and after the goal, the game was out of control. Faced with the various absences, Dorival Jr – who, suspended, watched the match from the stand – opted for a midfield with Thiago Maia and Diego, in addition to Andreas. Area protection, however, did not work, with Tolima finding plenty of space on the left side. However, the 10 shots in the first half were not enough for the tie.

Léo Pereira, twice, and goalkeeper Santos prevented the Colombian tie. Hernán Torres’ team even scored with Caicedo, but the offside was signaled after a VAR review.

POSSESSION OF THE BALL DOES NOT CHANGE THE SCORE

If possession of the ball was divided in the first half, after the break Tolima reached 60% until the 30th minute of the final stage, but could not turn it into real chances. The home team’s volume dropped too much, and Santos showed confidence when required.

With the additions of Ayrton Lucas, Lázaro and Marinho, Flamengo withdrew and waited for the counterattack – which took a while to come. The first shot by Lucas Silvestre’s team was by Marinho himself, at 30. Andreas took a risk at 34, but none of the attempts were dangerous.

In addition to Ibagué, both Tolima and Flamengo had clear chances, but Riascos and Pedro did not take advantage of it, and Rubro-Negro will return from Colombia with a good advantage in the bag.