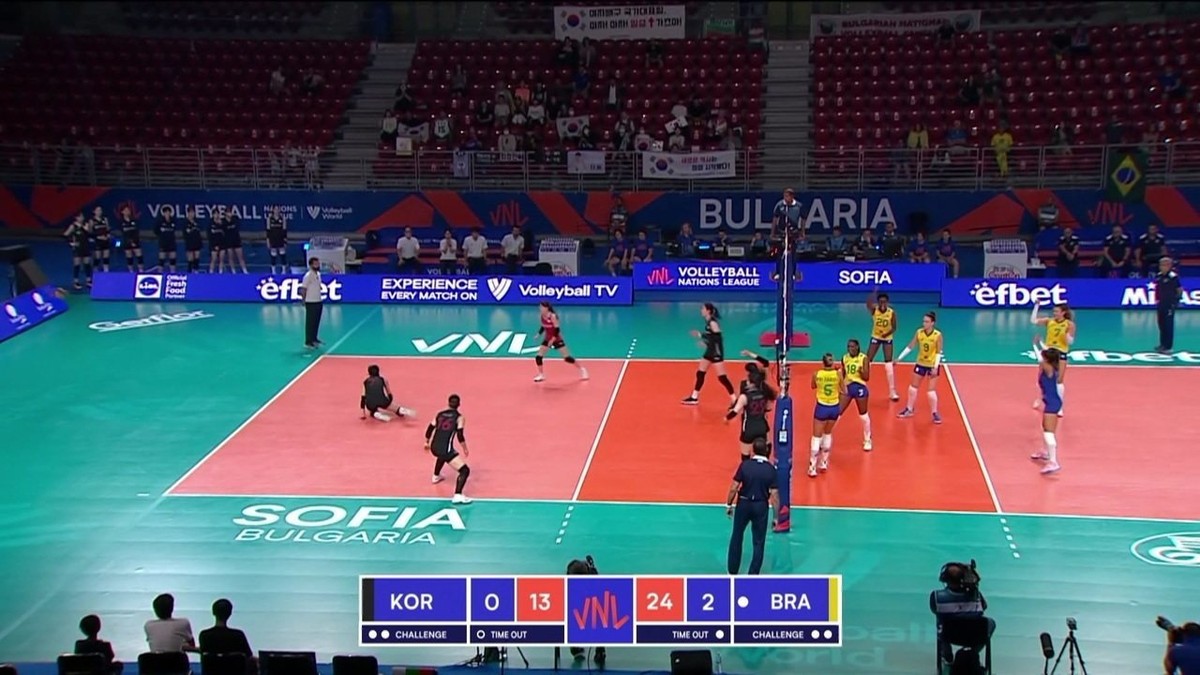 It was difficult to bet on any other outcome. But, faced with the worst team in the League of Nations, Brazil did not want to leave room for surprises. This Thursday, in Sofia, Bulgaria, the team played seriously and prevailed against South Korea: 3 sets to 0, partial 25/17, 25/19 and 25/13. With the victory, it guaranteed its place in the final phase of the competition. 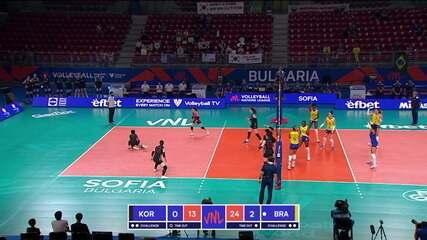 In the League of Nations, the number of wins is the first tiebreaker. Brazil reached eight in the competition. Thus, it can no longer be reached by those who do not occupy the classification zone. A spot in the finals is therefore guaranteed. The fight for the title will be between the 13th and 17th of July, in Ankara, Turkey.

Brazil, however, still have two games to go in Sofia. The team faces Bulgaria this Friday, at 2 pm, with sportv2 broadcast and full coverage of the ge. On Saturday, the qualifying round closes against Thailand at 10:30 am.

Brazil celebrates a point against Korea in the League of Nations – Photo: Disclosure / FIVB

Korea took to the court with just one set won in the competition. Faced with the fragility of rivals, Zé Roberto made some tests. In the starting lineup, Lorrayna made her first start as a starter. Julia Kudiess, who had already played against China from the beginning, was kept, as was libero Natinha. Julia Bergmann also started among the starters. During the match, the coach also gave space to Mayany, Rosamaria and Lorena.

Julia Bergmann was the biggest highlight in the score. The pointer scored 16 points, five of which were blocking. Her namesake, Julia Kudiess, was another important name in the victory: the center scored 10 points. On the other side, Jeongah scored 14 points and was the main player of the Asian team.

A block from Juah on Gabi opened the account. A reception error by Julia Bergmann on Hye Seon’s serve caused the Koreans to widen the gap. It didn’t take long for Brazil to establish the natural order of things. In a Julia Bergmann block, the score already pointed 4/2 for the Brazilians. Gradually, the selection soared. In Jeongah’s mistake, when stepping on the three-meter line, Brazil reached 12/6 in the account.

An ace from Carol brought the score up to 9/19. On the edge of the court, the South Korean coach scratched his head, without finding alternatives to face his rivals. It was a smooth game, as predicted. Korea even tried to close the gap, but there was no room for any attempt to react. On Lorena’s attack, end of set: 25/17.

A hit from Lorrayna opened the scoring in the second set. Nothing changed. In Julia Bergmann’s simple block, 8/4 for the Brazilians. Julia Kudiess widened soon in the sequence when going up alone to attack. The central of Minas, one of the highlights of the game, made the score 11/5 in a similar move shortly after. It was all very easy and without threats. At Pri Daroit Point, 9/15.

Brazil approached victory without haste. There was still time for Zé to send Mayany to the court instead of Carol. Korea even managed to close the gap, but nothing to scare. In Mayany’s block, the selection closed the account on the set: 25/19.

Nothing has changed on the return to the court. Faced with so many mistakes and wrong choices, Korea was even more fragile. That’s how Brazil got to 13/3 very easily, after a block by Lorena. Closing was a matter of time. Even with so many changes in the team, Brazil followed firm towards an easy victory: 25/13.