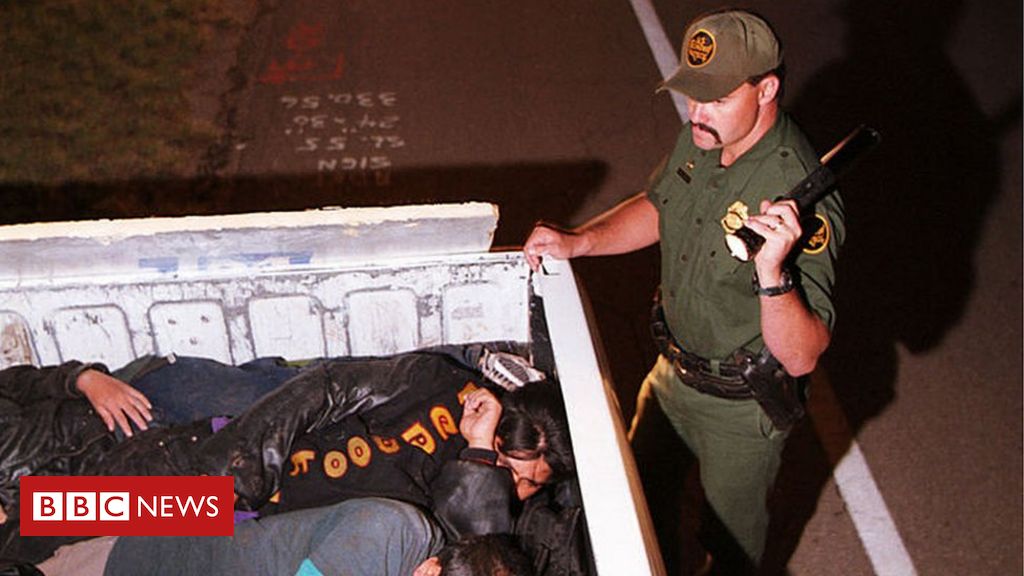 Texas Tragedy: Trucks and Other Dangerous Methods Used by Migrants to Enter the US

At the US-Mexico border, each immigrant has a price for smugglers.

Those with the fewest resources are the ones who take the riskiest trip, boarding cargo trucks to travel hundreds of kilometers in inhumane conditions.

Tragically, on some occasions, this type of travel — several hours in a crowded place with no ventilation or water — leads to death, as happened on Monday (6/27) near San Antonio, Texas, where more than 50 migrants died inside a truck.

“There is a whole chain in the economy of smuggling of immigrants. People who travel this way [em caminhões] are the ones paying the lowest amount asked by smugglers,” explains Gabriella Sánchez, a researcher on people smuggling across borders at the University of Massachusetts in Lowell, USA.

At the other extreme, there are immigrants who pay large sums to enter the US with less risk.

But in recent months, the desperation of many at the border over restrictive policies promoted by the US government after the pandemic has made them willing to take more risks.

“It’s a direct consequence of policies that have made traveling longer, more difficult or more expensive. And the desperation of the people who are in the border shelters is now so great that they are willing to die, because for them death is already in the horizon,” Dulce García, director of the migrant advocacy organization Angeles de la Frontera, told BBC News Mundo, the BBC’s Spanish-language service.

The truck route and more

Sánchez says that to explain the myriad methods migrants and traffickers use to cross the border, she would need “all day.”

But the method of trucks full of men, women and even children is often used by so-called “coyotes” because they are more likely to go undetected.

The border between Mexico and the USA has very intense traffic of goods. Cargo vehicles circulate at the borders and also on the highways of California, Arizona, New Mexico and Texas.

“There are thousands of them every day. CBP [Customs and Border Protection, autoridade de imigração dos EUA] it’s not equipped and it’s not even your job to inspect every vehicle,” explains Sánchez.

“That’s why the ‘coyotes’ use a lot of these types of vehicles, because they know that the probability of being inspected is very low”, he says.

And by taking more people on a single trip, smugglers make a bigger profit.

“There is a very clear correlation between people traveling more safely and the money they have to cover the costs,” says Sánchez.

One of the ways to cross the border without your own documents is to use a valid border crossing card that belongs to someone else who legally obtained it. But there is a risk that this will be discovered by the authorities.

Others pay to hide in small vehicles, with less danger compared to trucks.

“Smugglers don’t charge the same for everyone. It doesn’t matter if you come with someone from the same city, it varies according to many factors: if you’re a man, if you’re a woman, your age… “, says Sánchez.

For the “coyotes”, profits are their main objective – not the guarantee of bringing migrants back safe and sound.

Immigrant rights activist Jenn Budd, the former head of the US Border Patrol unit, told the BBC that smugglers tend to pack as many immigrants as possible into vehicles.

She remembers a case where she intercepted an old Ford truck driving on a mountain road near the border. In the cargo of the vehicle were about 30 people — lying and stacked on top of each other.

“They were lying there like sardines. It’s dangerous. These trucks can tip over. People in the back of the vehicles often suffocate. It’s very common.”

Vehicles are not just used to cross the border. They are often used to bring immigrants to large cities, where it is easier for a migrant to disperse.

As Texas is closer to the regions where most Mexican migrants come from, the US state has become the most popular route for “coyotes”. In the cities of Laredo and McAllen, trucks often head towards San Antonio.

In this region, tragedies such as the one on Monday or the one in 2017 occurred, when eight people from a group of 39 migrants died of suffocation in a truck.

In the most recent case, says Sánchez, “probably, people were already on the US side when they got into a truck like this.”

“On routes like Laredo, for example, almost every truck goes through a detector. So I speculate — this will have to be confirmed later — that many of the people were already on the US side and got into that vehicle there.”

In many cases, notes Jenn Budd, migrants are already debilitated after having crossed the border on foot over rough terrain.

“Smugglers say the walk takes 15 or 30 minutes. But in fact it can take days. And people are already dehydrated.”

“A crossing can cost around US$ 5 thousand (more than R$ 25 thousand). But, and this is very important to know, the costs vary a lot and many times this amount has not been paid yet”, says Sánchez.

People often make a deal with “coyotes” to pay them as soon as they arrive at their destination.

‘It will be a few days until the next tragedy’

Despite the dangers, the number of migrants arriving at the US-Mexico border is an all-time high.

In May of this year, 239,416 migrant arrests were recorded in one of the biggest waves in recent years.

Dulce García says there are people in shelters on the Mexican border who have been waiting for nearly two years to have their refugee applications accepted in the US.

“I can’t speak for the entire border, but at 17 points we support, migrants are so desperate they’ve attempted suicide,” says Garcia.

In the past, paying a smuggler cost a few hundred dollars, but now the value reaches an average between US$8,000 and US$10,000 (from R$40,000 to R$50,000), explains the director of Angeles de la Frontera. . And risking the cheapest trip is the affordable option for most.

Sánchez says there is a pattern after incidents like the one in San Antonio.

“In the next few days, things may calm down a bit, because there will be a lot of inspections, raids, more people watching at night. But it will be a few days before the next tragedy comes.”

For the expert, the “only solution” is for governments to offer “mechanisms to travel legally, regardless of nationality, race or social status.”

“That’s the only way there will be no demand for smugglers. It sounds very simple, I know, but if there isn’t that freedom of access, there will be another ‘San Antonio’ ​​in a few weeks.”