The suspect of being the driver of the truck that took immigrants from Mexico to the United States on a trip that resulted in the death of more than 50 people was accused in the American Federal Court of having illegally taken people from abroad to the country this Wednesday ( 29).

The truck was found in the city of San Antonio, in the state of Texas, on Monday. 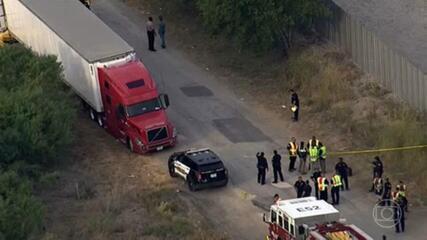 The man suspected of being the driver is called Homero N. He was arrested near where the vehicle was parked, “under the influence of methamphetamine”, according to the San Antonio Express-News, citing police sources. The individual “tried to impersonate one of the survivors,” said Francisco Garduño, director of Mexico’s National Institute of Migration.

On Tuesday, federal agents detained two other men at an address linked to the truck’s registration, according to court documents.

Juan Francisco D’Luna-Bilbao and Juan Claudio D’Luna-Méndez, two Mexican nationals whose tourist visas had expired, are being prosecuted for carrying a prohibited weapon.

The vehicle was registered to an American company in Alamo, Texas, which denied that it was owned.

Another 11 people were still hospitalized in the region, they added, without giving details of their health status. The previous balance was 51 dead, 39 men and 12 women.

Of the total number of victims, 27 were from Mexico, 14 from Honduras, seven from Guatemala and two from El Salvador, said Francisco Garduño, director of Mexico’s National Institute of Migration. The nationalities of the other three are not yet known.

The discovery took place on Monday night. A public employee in the city of San Antonio heard a call for help near a highway where he was working and opened the back door of the truck.

Rescuers retrieved 46 bodies and 16 people who were still conscious, including four minors, who were transferred to nearby hospitals.

After a day with temperatures hovering around 40ºC, the victims suffered hyperthermia and acute dehydration.

After this tragedy, Mexico, the United States, Guatemala and Honduras reached an agreement this Wednesday to “work together” and support the injured and the victims’ families, as well as to cooperate in the investigation “to bring those responsible to justice ” and to “establish an Immediate Action Group to exchange information and work in a coordinated manner to dismantle the networks of human traffickers.”

US President Joe Biden called on Tuesday to strengthen the fight against “a criminal industry that generates billions of dollars”, alluding to the smuggling of migrants.