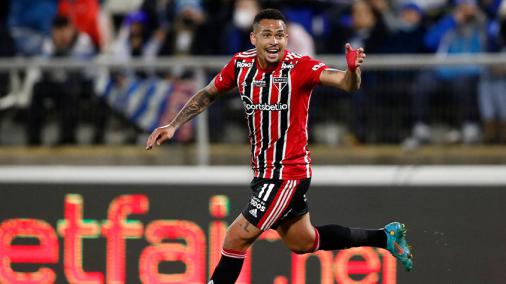 It was a day to talk about another excellent first half of the Sao Paulo. But in a tense game, the team ended up having three players sent off. Even so, however, they beat Universidad Católica by 4-2, in Chile, and opened up a good advantage for the return duel of the round of 16 of the Copa Sudamericananext week, in Morumbi.

GALLERIES
+ PERFORMANCES: With São Paulo with three less, Luciano disenchants in a rout full of emotions

Even with the pressure of the opposing crowd and with an odd lawn, full of holes and extremely dry, Tricolor prevailed in the first half and opened 3 to 0 on the scoreboard with two goals from Luciano, who broke the fast of not hitting the nets since May 8th.

In the second half, however, the curse of Tricolor’s drop in performance almost came to light. The team conceded a goal early on. And nervousness seems to have taken over. Igor Vinícius, Nestor and Calleri took the red and left the team with eight on the field.

Too bad for São Paulo that, before leaving the field, the Argentine left his goal in the match, breaking another fast – the team hadn’t scored goals since May 25, against Ayacucho, for the same South American – and the two goals from Católica didn’t scare as much as they should have.

TRICOLOR SHOWS WHAT IT HAS COME TO

São Paulo showed right at the beginning what they went to Chile. At 3′, Igor Vinícius dribbled two markers and hit a cross, but the defender deflected it to a corner.

In the next minute, with no time to rest, Léo deflected a corner kick and the ball passed close to the goal, without Miranda being able to deflect it into the goal.

At 8′ it was Reinaldo’s turn to appear dangerous for the first time. The winger kicked hard from outside the area and Sebastián Pérez defended well.

It was a sign of what would happen in the next play. At 11′, after a corner kick, Calleri dominated the ball inside the area and was brought down by Daniel González. Penalty scored and converted by Reinaldo, who has not missed a penalty since 2019.

OPEN WAY FOR THE SECOND

Excited with the goal scored, Tricolor did not reduce its momentum. At 25′, Nestor received a pass inside the area, managed the turn and hit almost without an angle, demanding a good appearance from Pérez, again.

At 27′, however, Católica was unlucky. Jandrei saved a ball without risk and burst from behind looking for Calleri. The Argentine struggled a little with the domain, in front of the terrible lawn of the stadium. But Isla ‘did him a favor’, failed miserably when he lost time on the ball and shirt 9 gave Luciano the right pass, free, to score and break his goal fast.

WHAT DAY OF SAO PAULO

At 32′, Tricolor had already reached the attack again, in a poisonous corner kick from Igor Vinícius. And, in desperation, Núñez risked shots from outside the area that stopped easily in Jandrei’s hands.

Which made things easier for São Paulo’s third goal. At 38′, Reinaldo found Luciano at the edge of the area. The attacker got rid of two markers with ease, made the penetration and hit hard, high, to expand the score.

Behind the marker, the Catholic went for the all or nothing. At 43′, Asta-Buruaga received a corner kick in the small area and risked the shot, but Diego Costa threw himself in front of the ball to avoid the goal.

But it was little for the Chileans to discount the score opened by the visitors at their home. And so the first half ended, with a wide tricolor dominance.

TABLE
> Check games, classification and simulate results of the Brasileirão-22
> Check out the games of the Copa Sudamericana-22
> Meet the new LANCE results app!

One of São Paulo’s biggest fears this season has been the team’s terrible second time. And the fear arose again. As soon as the referee whistled for the restart of the game, Zampedri received a pass from the right under the goal and completed the net.

Shortly after, at 4′, the tricolor heart beat hard. That’s because Igor Vinícius made a silly foul in midfield, received the second yellow card and was sent off.

If the risk of the team’s blackout sent chills down the spine with São Paulo’s five minutes of terror in the second half, things got back on track.

Ceni put Patrick on the field to play on the right in place of the bright Luciano. It was more than right. At 17′, coming from the wing, the Black Panther put a pen to the marker on the baseline and crossed. Igor Gomes straightened out for Calleri, hitting hard from the edge of the area and hitting the right angle.

ARBITRATION STARTED TO ZICAR THE DANCE

São Paulo tried to control the match when, in the 28′, the VAR warned of a step on the leg of Rodrigo Nestor’s opponent. The referee accepted the recommendation and expelled the tricolor midfielder.

Shortly after, it was the turn of a physical trainer for the Brazilians to be sent off after a slight riot with a ball boy on the sideline. And the Catholic tried to react. In the 36th minute, Tapia went to the baseline and made a cross for Núñez to come in and force Jandrei to defend.

TOTAL PRESSURE AND NERVES TO THE SKIN FLOWER

In the 40′, the same Tapia, who had started well in the game, made another good move on the right and crossed in the measure in the head of Valencia, who climbed high and headed hard, with no chance for Jandrei.

Do you think it’s over? Anything. Calleri received the red card and left São Paulo with eight on the field. And from then on it was full pressure, with Jandrei saving the Tricolor as best he could, a lot of catimba and a guaranteed advantage for the return duel.

São Paulo and Católica will face each other again next Thursday (7/7), at 9:30 pm (Brasília time), at Morumbi. Before, Tricolor faces Atlético-GO, away from home, at 16:00 (Brasília time) on Sunday (3/7), for the Brasileirão. On the same day, the Chileans face Coquimbo Unido, for their national competition.

Previous Guru of denialists, Vladimir Zelenko dies at 48
Next Brazilians are indicted in the United States for fraud of US$ 100 million