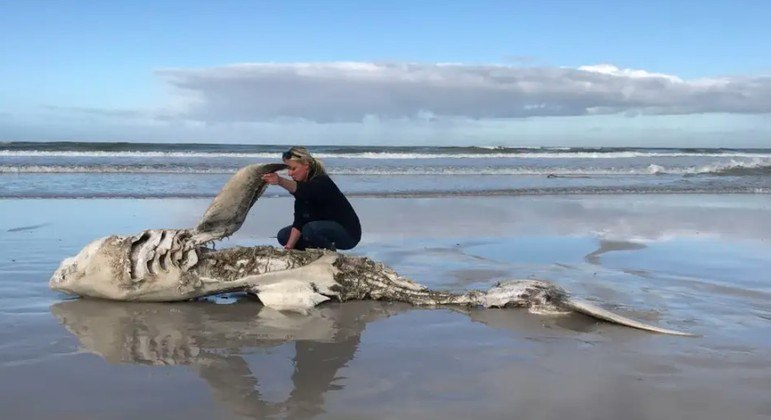 Since 2017, at least eight great white sharks have been found shattered off the coast of South Africa. For a few years, researchers have wondered what could wreak so much havoc on one of the world’s most feared predators. The answer was surprising: a pair of orcas.

The results of research on the subject, carried out over five and a half years, were published in the African Journal of Marine Science and point to cetaceans as responsible for the deaths.

According to the research, orcas — dubbed Port and Starboard by scholars — have taken a liking to the white shark’s fattest and most nutritious organs, especially the liver and heart. In some cases, the genitals too, all carefully extracted and devoured.

It is suspected that several other white sharks were killed by the pair, but the remains never reached shore. Another suspicion is that other orcas in the region have also learned to carry out such attacks.

Using movement data from tagged animals, scientists have discovered that great whites are terrified and actively avoid certain regions of the coast of South Africa that have been dominated by them for centuries. Scientists speak of “long-term mass emigration”, which indicates that the situation is far from over.

Below, you can see how such an attack works:

“The more orcas frequent these locations, the longer the great whites stay away,” Alison Towner, a marine biologist and lead author of the research, said in a press release.

Orca predation is changing even with the entire ocean ecosystem in place. With the escape of the great white sharks, the copper shark has become the main predatory fish in the region – and they are probably relieved, as they are also devoured by the whites.

However, research has revealed that Port and Starboard may have noticed this and have already started hunting copper sharks as well. In turn, there are more seals in the region, which eat more African penguins, a species in danger of extinction even before these possible changes are detected.

It is important to note that orcas are giants: they reach 9 m and weigh up to 7 tons. The great white sharks exceed 6 m, reach 2 tons (only the females, the males are much smaller) and have hundreds of teeth capable of tearing the flesh and killing with a single bite.

As the jaws of orcas are not efficient at killing or incapacitating prey with a single bite, they hunt in pairs or groups, with advanced techniques to tire and corner their targets. Most sharks are solitary, and they avoid even dolphins much smaller than orcas.

The outcome of such a fight is not difficult to predict.


In 2020, HORA 7 commented on the killing of white sharks by orcas in the region, when the first suspicions began. Remember!