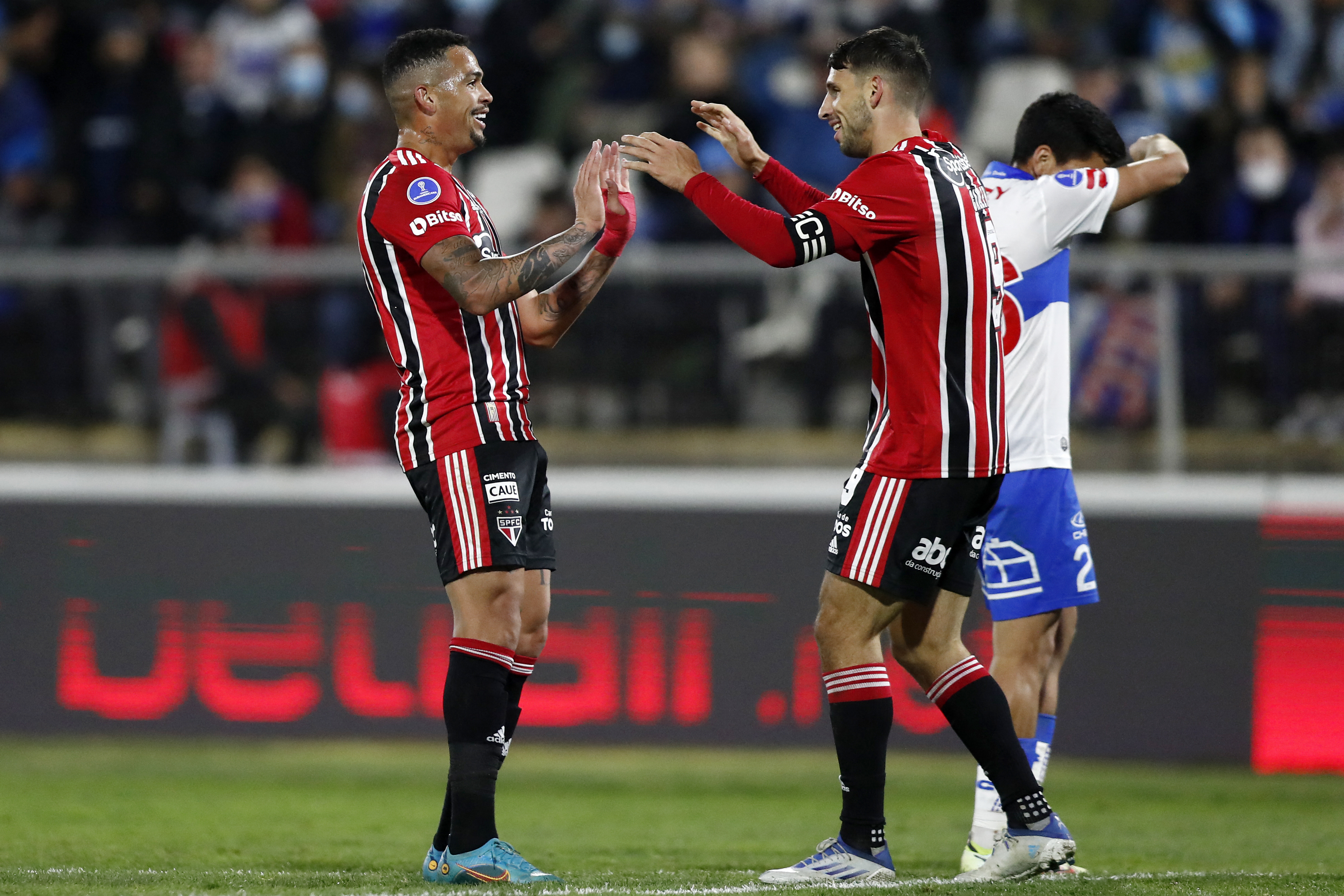 With 3 expelled, São Paulo thrashes Católica in Chile for the South American Round of 16

São Paulo won a very important victory this Thursday, in Santiago, Chile. Visiting the Universidad Católica at the San Carlos de Apoquindo stadium, for the round of 16 of the Copa Sudamericana, the team led by Rogério Ceni did not know the opponent in the first half and secured the rout by 4 to 2. Reinaldo, from a penalty , Luciano (2) and Calleri hit the net for Tricolor. Zampedri and Valencia discounted for the hosts.

The expulsions of Igor Vinícius, Rodrigo Nestor and Calleri in the second half complicated São Paulo, which built a great advantage in the initial stage. When they had ten on the field, Tricolor even scored the fourth goal. But, with only nine and, later, eight athletes on the pitch, the visitors had to give up attacking and hope for the match to end soon.

São Paulo will face Universidad Católica again next Thursday, at 9:30 pm (Brasília time), at Morumbi. Tricolor can lose by up to 1-0, which will still advance to the quarterfinals of the Copa Sudamericana. For the Chilean team to qualify, it will take a 3-0 victory in regulation time. 2-0 takes the decision to penalties.

São Paulo commanded in the first half and had no difficulties to open the scoring. Just 11 minutes into the game, Calleri was hit by González, who hit his arm on the tricolor striker’s head, and the referee awarded a penalty. Reinaldo went for the kick and didn’t waste it, putting the visitors at an advantage.

With more possession of the ball, the team led by Rogério Ceni expanded by taking advantage of a grotesque failure by Isla. In a good direct link made by Jandrei, the Chilean right-back slipped and ended up being disarmed by Calleri, who gave Luciano a sugary pass for Luciano to arrive, hitting first, free, inside the area, and making it 2 to 0.

Ending the ten-game fast without hitting the nets, Luciano still made one more before the break. And what a goal! The striker received from Reinaldo, passed between two defenders with just one touch, invaded the area and touched the goalkeeper’s exit, making São Paulo even more comfortable in the match.

The quite smooth match for São Paulo took different shapes in the second half. In the first minute, Universidad Católica went to the net with Zampedri, who received a low cross inside the small area and just pushed it into the goal. As if that weren’t enough, at five Igor Vinícius was fouled, received his second yellow card and was sent off.

Because of the numerical inferiority, Rogério Ceni was forced to serve Luciano for Patrick’s entry, and it was precisely he who started the move for the fourth São Paulo goal, putting a beautiful pen on the marker and crossing low to Igor Gomes, who fixed it to Calleri hits at the top of the box, from the edge of the area, and sends the corner. Another goal.

But the match got tense again for Tricolor a few minutes later. Rodrigo Nestor stepped on the opponent’s leg and, after analyzing the VAR, ended up being sent off by the referee, leaving São Paulo with only nine players on the field. With two more men, Universidad Católica reached the second goal with Valencia, who headed in a good cross from Tapia, cheering the crowd in the stadium.

And when São Paulo thought there would be no more scares, Calleri was also sent off, in the 41st minute of the second half, leaving the Tricolor with eight athletes on the field. From then on, it was attack against defense, but São Paulo managed to hold on and leave the field with the important 4-2 victory in Chile.