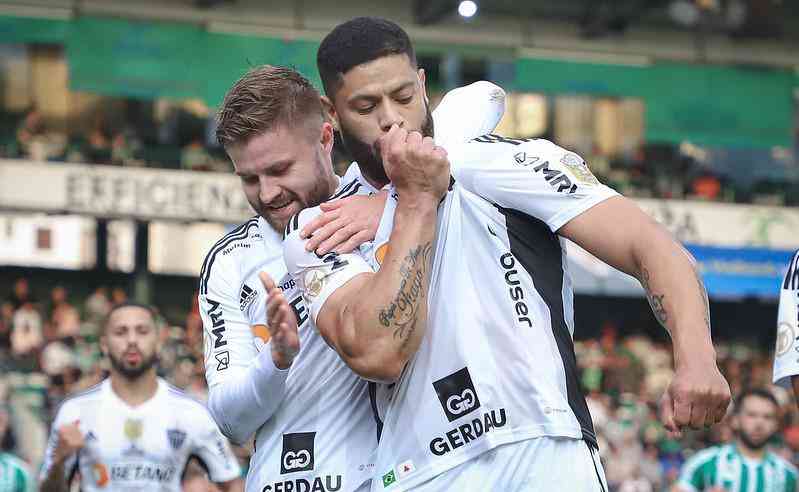 In an afternoon of correct performance at the Alfredo Jaconi Stadium, in Caxias do Sul, Atltico beat Juventude 2-1 this Saturday (2) and took the runner-up position in Serie A of the Brazilian Championship, with 27 points. Galo’s goals in the match were scored by forwards Hulk and Eduardo Sasha.

Atltico left a good performance in the south of the country. With good defensive consistency in most of the duel and lethality when going up to the attack, the Minas Gerais team deserved to win against Juventude and rose from 5th to 2nd place in the Brazilian, albeit temporarily.

Atltico’s next commitment has a decision-making nature. On Tuesday (5), at 7:15 pm, Galo receives Emelec in Mineiro, in Belo Horizonte, for the return game of the round of 16 of the Copa Libertadores da América.

In the first leg, in Ecuador, the teams drew 1-1. Therefore, “El Turco” Mohamed’s team needs a victory at Gigante da Pampulha to advance to the quarterfinals. In the event of a new tie, the decision for the spot will take place in the penalty shootout.

In the first minute, Atltico arrived in danger. With an efficient high pressure, the team took the ball back in the middle, and Caleb was triggered by the right. The youngster hit from outside the area, placed, forcing a good save by goalkeeper Csar. Juventude responded with a quick counterattack, which ended with Chico’s submission wide.

The course of the first half revealed a scenario of divided ball possession, with a slightly greater role for the Rooster. When they had possession, Atletico faced a Juventude with lower lines and looked for moves from the front men to disrupt the opponent’s structure. Without the ball, the Minas Gerais team had triggers to increase the mark and sought to disturb the gacha team’s outing.

Due to the good defensive work of both teams, the game had few chances to score. In the 27th minute, Igor Rabello made a beautiful long throw to trigger Ademir in depth. The Atlético sprinter started ahead and was pushed by William Matheus inside the area. The referee awarded a penalty. Hulk charged with category and opened the scoring: 1 to 0.

After the goal, Juventude immediately launched the attack in search of an equalizer. Galo even gave up some spaces in the middle, but had an efficient game from the defensive line to avoid great opportunities for the gacho team. The new scenario of the game provided more spaces for Atltico to counterattack, especially with Hulk, but the alvinegras initiatives did not work.

At halftime, Turco promoted the entry of midfielder Otvio in the spot for forward Ademir. In the new configuration with the double steering wheel, Calebe was opened on the left and Eduardo Vargas opened on the right, with Sasha and Hulk following on the inside.

At 4 minutes, Atltico created their first good chance. After stealing the ball from Allan in the middle, Hulk took off and set Sasha free in the area. The attacker had difficulties to dominate and lost time in the bid, finishing for Csar’s defense.

At 10 minutes, another goal from Galo. Hulk started on the left and made a beautiful individual play on the counterattack. The number 7 gave a beautiful cross to Vargas, who, with intelligence, arranged for Sasha in the small area. The attacker only took the trouble to push to the nets: 2 to 0.

Shortly after the second goal, Turco promoted the entries of Nacho and Rubens in the vacancies of Calebe and Vargas, respectively. With absolute control of the game, Atltico prioritized the protection of its own area and continued looking for spaces in the counterattacks. In defense, Rver and Igor Rabello stood out with punctual interventions.

At 30 minutes, Juventude scored. Moraes took advantage of the rebound and kicked from outside the area. He also had a detour in Rver to balance the nets: 2 to 1. Soon after the goal, Mariano took Eduardo Sasha’s spot at Galo.

The scenario changed after the jaconero goal. Atltico regained control of the ball with a commendable posture, defending itself by keeping the ball at its feet. In additions, Turco also promoted the entry of Fbio Gomes in the spot for Hulk to gain time. With a convincing performance, the Galo returned to add three points in the Brazilian and took the vice-leadership.

Reason: 15th round of Serie A of the Brazilian Championship

Previous World Doesn’t Want Afghanistan to Be Independent, Says Taliban Supreme Leader
Next TudoGames: 10 games scheduled for release in 2023 that deserve your attention!