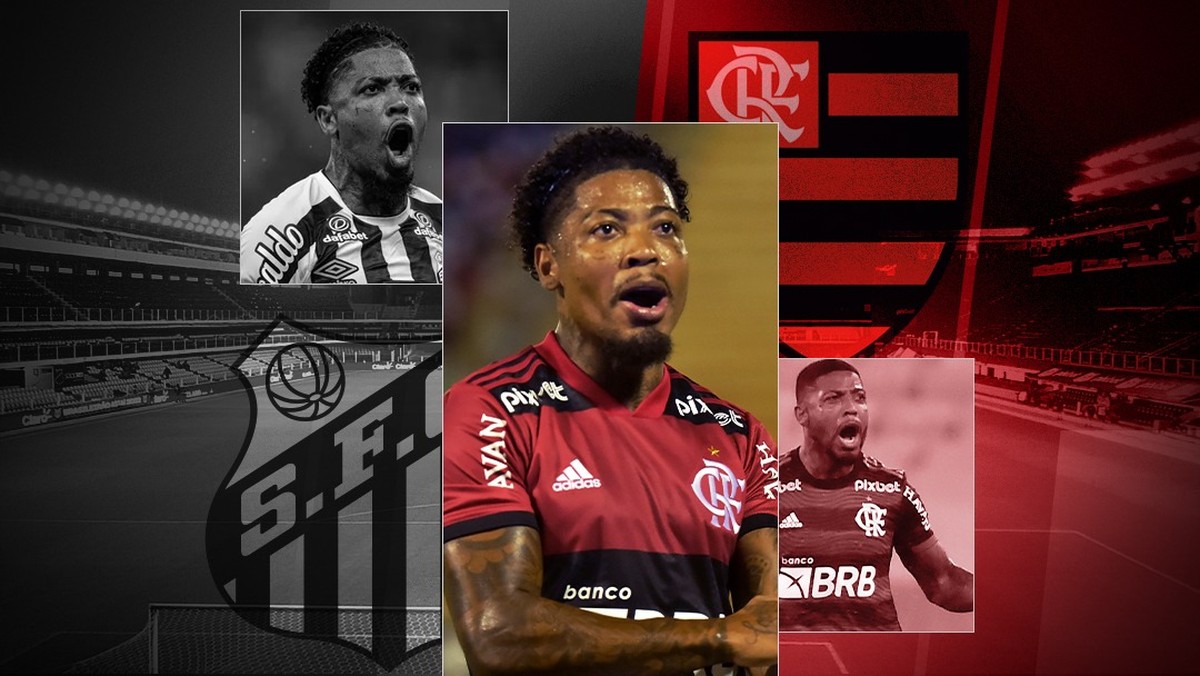 Santos and Flamengo face each other this Saturday, at 19:00 (Brasília time), for the 15th round of the Brazilian Championship. This will be the first time that striker Marinho, who left Peixe at the beginning of the year, returns to Vila Belmiro, where he played for three seasons and will be missed.

Marinho stayed at Santos from 2019 to the beginning of 2022, but he didn’t even take the field in the current season. There were 113 games, 41 goals scored and two vices: the 2019 Brazilian Championship and the 2020 Libertadores.

Marinho, now at Flamengo, was successful at Santos — Photo: ge

Featured in two of the three seasons in which he wore the Santos shirt, Marinho was close to entering the club’s history. In 2020, he was elected the King of America, an award given to the best player in Libertadores.

That year, the striker helped Santos reach the Libertadores final, but the 1-0 defeat to Palmeiras was marked. The player felt a physical problem at the beginning of the decision at Maracanã and was far from playing his best football.

After the runner-up for Palmeiras, Marinho was never able to repeat the great performances that earned him the award for best player in the 2020 Libertadores. In 2021, he suffered from injuries, was the center of controversy and went into crisis with the fans.

The main controversy in 2021 began with a bruise on his thigh. According to verified by ge at the time, a problem in the treatment carried out by the medical department of Santos took the player away from the pitch for ten matches. During this period, shirt 11 gave an interview to journalist Ademir Quintino in which he mentioned that it was “a total medical error”.

In the same interview, Marinho revealed dissatisfaction for not having been negotiated by the Santos board and said that the club had refused proposals from Palmeiras and Atlético-MG. He said he would stay at Santos until the end of the season, but he did not guarantee that he would stay in 2022.

– I was never told about a career plan. They haven’t called me yet (to talk about renewal). I even asked about it, but they told me that I couldn’t give a raise, but that’s ok. When something comes from outside, think about it, let me breathe. Let me breathe, too. I always asked for a team to fight for titles. You see Soteldo, Luan Peres, Alison, Pituca leaving…

– Everyone leaving. And I don’t go out too? But we are not in a good situation and I will continue, because I arrived through the front door and I will leave with Santos in the first division. I’m closed until the end of the championship, and let the president think a little. I don’t want to go out for free,” Marinho said.

+ Read all the news from Santos

And it didn’t come for free. In 2022, Marinho aroused the interest of Flamengo. In negotiations to leave Santos, he was not even registered in the Campeonato Paulista and ended up being sold for R$7 million.

Marinho arrived at Flamengo surrounded by great expectations from the red-black crowd, and the excitement increased after the good debut, in the victory over Boavista, with the right to a goal. Afterwards, however, there was more frustration than happiness.

Under the command of Paulo Sousa, Marinho was chosen in different roles than he was used to in his best moment at Santos, on the right, with more freedom. And he lost space. The Portuguese even indicated that the player had difficulties in fulfilling his tactical determinations.

With the arrival of Dorival, Marinho gained more spirit, especially after the goal scored in the victory over América-MG, his second for Flamengo in 24 games played so far.