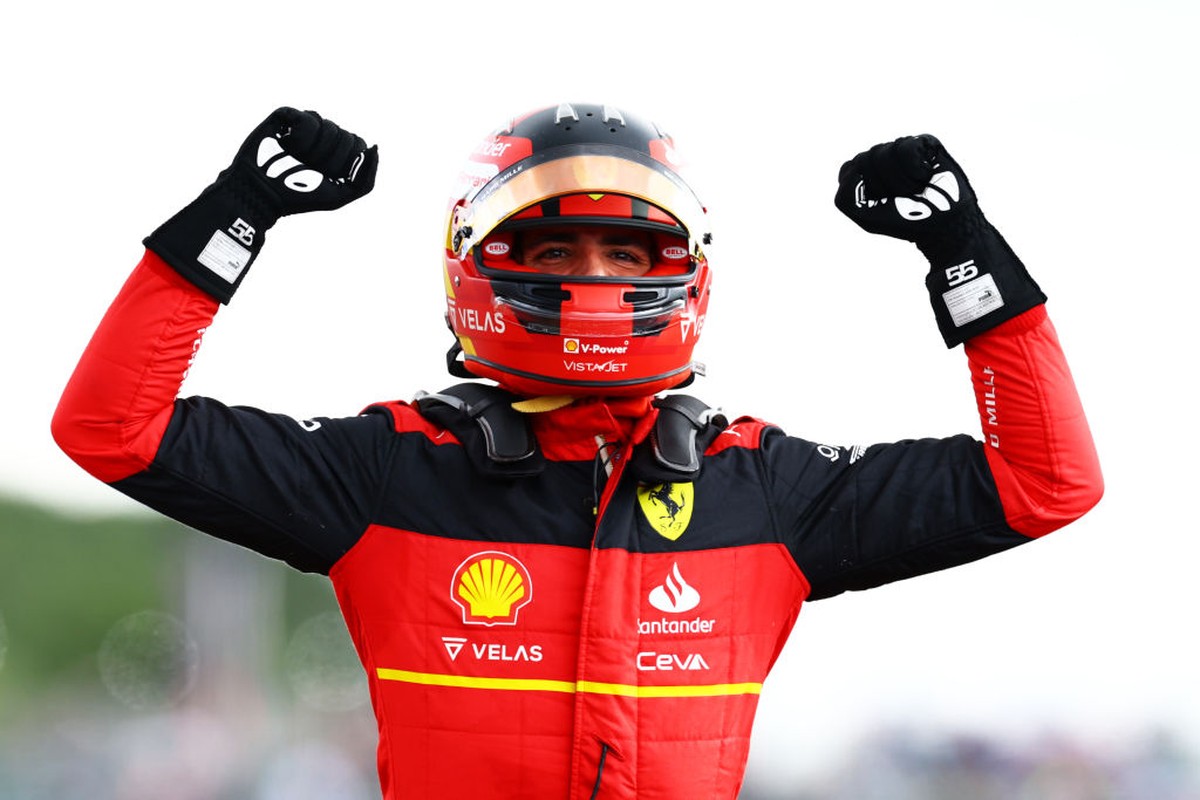 British GP: Sainz wins for the first time in his career | formula 1

Spaniard Carlos Sainz, from Ferrari, won for the first time in Formula 1 when he crossed the finish line at the end of the British GP on Sunday. In the busiest race of the year, he, who started on pole, took victory after a safety car with 13 laps to go, which put him back in the fight for victory. Sergio Perez, who crashed into Leclerc at the start, made a recovery race and was second, followed by Lewis Hamilton, who took the podium for the second time in a row and even won the fastest lap point.

Victory seemed to elude Sainz a few times during the race. At the first start, he was overtaken by Verstappen but, after an accident, the red flag came in and the restart was in the starting positions, so the Spaniard returned to first position. On lap 10, Sainz, then leader, passed straight, dropped to second, but then Verstappen had problems, and the Spaniard returned to the lead.

Then, in a team game, Ferrari forced Sainz to open the position to teammate Leclerc, and the Spaniard once again saw victory in the distance. But luck once again smiled on the Spaniard in a safety car with 13 laps to go and a team strategy error with Leclerc. Then Sainz took the lead in order not to lose more.

Verstappen’s race was tumultuous. The championship leader took the lead on lap 10, but soon after had problems and was pitted. He came back in sixth, couldn’t keep up, but seventh place ended up in profit.

For Charles Leclerc, fourth place has a bitter aftertaste. The victory was in his hand when, with 13 laps to go, Ferrari erred in its strategy by not sending him to the pits to put on soft tyres. His competitors went into the pit and overtook him on the lap.

In the Championship, Verstappen has 181 points, followed by Sérgio Perez, with 147 and Charles Leclerc with 138. Sainz is fourth with 127 after the victory this Sunday. By teams, RBR leads with 304, while Ferrari has 228.

Max Verstappen had better traction, taking the lead over Carlos Sainz, in a start marked by an accident that involved several drivers, such as George Russell, Pierri Gasly, Alexander Albon, Yuki Tsunoda and Guanyu Zhou and Esteban Ocon. The red flag was raised and the race stopped.

Gasly ended up touching Russell as he tried to put himself in the gap between the Brit and Zhou. On impact, the Mercedes driver touched Zhou’s car and spun. Stroll, in the midst of the mess, was almost hit and brushed against Vettel’s left rear wheel, but both escaped. Albon also spun, and Ocon was also hit on his front right wheel by one of those involved in the crash.

After almost an hour of interruption, the race resumed with the original positions of the starting grid, that is, Sainz came out in front of Verstappen again. This time the Spaniard closed Verstappen, who tried to overtake and failed. Leclerc tried to get in the middle and touched Perez, but stayed in third, while the Mexican dropped to fourth. In one of the corners, the four riders were side by side.

The eleventh stage of the 2022 Formula 1 season will be the Austrian Grand Prix at Circuit Zeltweg on 10 July.

On lap 5, the Mexican Perez stopped in the pits to change the nose after the troubled start, changed tires too and dropped to seventeenth position.

On lap 10, Carlos Sainz went straight through one of the corners and ended up coming back behind Verstappen, who took the lead.

On lap 13, Verstappen had car problems, was passed by Sainz and Leclerc and went to the pits, returning in sixth place.

Leclerc pulled over to try to overtake Sainz, but Ferrari did not give orders for the positions to be reversed. The radio exchange got more intense, with the Spaniard’s engineers asking him to speed up, and Leclerc mumbling about the possibility of Sainz making room for him. On lap 20, Sainz pitted and came back in third.

On lap 25, Verstappen pitted and came back in eighth place behind Sebastian Vettel. Perez, after the stop at the beginning of the race, was already sixth.

On lap 26, Leclerc went to the pits, didn’t move his nose (which was partially damaged after the start of the race) and came back in third, two seconds behind teammate Sainz. Hamilton temporarily took first position.

On lap 29, Leclerc asked the engineers if he was free to compete for position with teammate Sainz. The two were less than a second apart in the fight for second, while Hamilton was in the lead and still had to stop. The Spaniard’s radio response was “You have to turn in 1m32s2, otherwise we’ll send you open for Leclerc to pass”. On lap 31, the order came over the radio and the Monegasque took the lead.

On lap 34, Hamilton took to the pits, but he didn’t have such a good stop, losing 4.4s and putting on a hard tire, returning in third place, behind the two Ferraris.

On lap 39, Ocon had problems and stopped the car in the middle of the straight, forced the safety car to come in, and then Hamilton and Sainz went to the pits to put on soft tires, as did Verstappen, who was in eighth. Leclerc, who was leading the race and heading towards victory, did not go to the pit, so he would have to complete the race with old tyres.

With new tyres, Sainz managed to overtake Leclerc at the restart and took the lead on lap 43. Perez managed to get on top of Hamilton and took third position.

Hamilton was in fourth, while Perez and Leclerc fought for second position, then the Briton managed a double overtake and went for the second position. But in the following corners, Perez returned to second and Leclerc to third, sharing three corners in a row. In the end, Hamilton passed Leclerc and secured the podium.