Cano, from Fluminense, reaches 25 goals and surpasses his best mark in Brazil | fluminense

It’s still July, and Germán Cano has already surpassed his best season since he arrived in Brazilian football, in 2020, when he scored 24 times for Vasco. With the Fluminense shirt, he reached 25 goals this Saturday afternoon (2), for the 15th round of the Brasileirão, at Maracanã.

– The individual gift (the goal) is very good, we will continue working like this, in the same way. We are playing very well. The team is very compact in all lines. It is to improve more and score more goals in the second stage – said Cano, in an interview with Premiere FC. 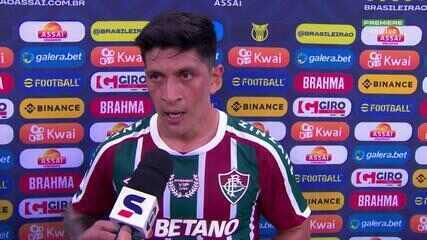 In the celebration of the first goal against Corinthians – Fluminense’s second in the match -, Cano paid tribute to Fred, who is saying goodbye to Flu. At the celebration, the Argentine pointed to the Tricolor idol.

At halftime against Corinthians, Cano took the opportunity to complain about the state of the Maracanã lawn.

– The field is very weak, there is a lot of sand. I know they’re fixing it, but it’s hard to play underneath.

Fluminense returns to the field next Saturday (9), at 7 pm, at Maracanã, against Ceará, for the 16th round of the Brasileirão. The match will mark Fred’s official farewell and tickets are already sold out.