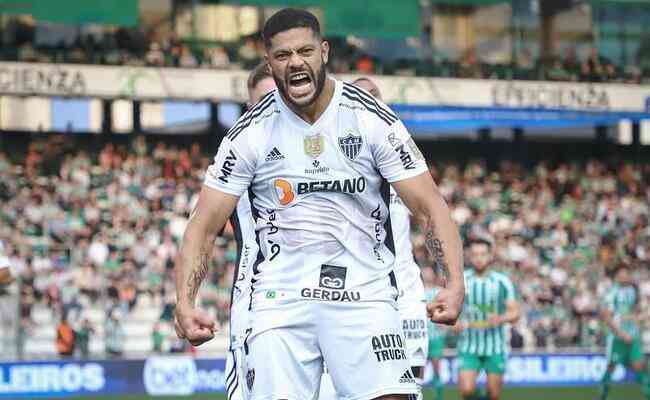 Hulk climbed one more step in important lists of top scorers in Atlético’s history. With the goal scored in the 1-0 victory over Juventude, this Saturday (2), at Alfredo Jaconi stadium, in Caxias do Sul-RS, for the 15th round, the striker became the 10th highest scorer of Galo in the Brazilian Championship.

The Atletico striker occupied the 11th position in the ranking. Now, with 26 goals, he drew level with defender Leonardo Silva, who defended Atlético between 2011 and 2019.

To integrate the top 10, Hulk had to leave behind other recent top scorers at Galo. Among them are forwards Fred and Luan, both with 24 goals. The winger Paulo Isidoro, who had a remarkable time at the club in the late 60’s and early 70’s, also has the same number.

The top scorer in Atlético’s history in the Brazilian Championship is Reinaldo, with 89 goals scored. Following are Marques, with 64, and Guilherme, with 55 (see the full list in the gallery below).

Hulk has been having a spectacular season for Atlético in 2022. In 30 matches, 22 goals have been scored. Of these, seven were scored in the Brasileirão, where he is the third leading scorer. Ahead of the striker are Calleri, from São Paulo, and Germán Cano, from Fluminense, with nine and eight, respectively.

Previous App promises cash payment to receive calls; it’s trustable?
Next Galaxy A33 5G Review | A good phone overshadowed by the A53 5G